As surprising as it may be, hyrax are related to the elephant. Fossils show that hyraxes used to be bigger animals which waned as bovidae conquered the grasslands. These small animals are often seen around lodges. Five species may be distinguished. The southern tree hyrax (Dendeohyrax arboreus) present in the southern Rift Valley from south Kenya to Zambia with a few scattered populations in Mozambique and South Africa. The western tree hirax (Dendrohyrax dorsalis) is very similar in appearance and behavior is found in the dense forests of Western and Central Africa from Sierra Leone to the Democratic Republic of the Congo. The eastern tree hyrax (dendrohyrax validus) has a very patchy and limited distribution limited to montane forests in Tanzania.

In savannahs, one finds two species which are often sympatric : the bush hyrax (Heterohyrax brucei) widespread in all Eastern Africa from Sudan to Zimbabwe including the Horn of Africa, Kenya and Tanzania, and the rock hyrax (Procavia capensis) which is the most widespread species from Senegal to Somalia and even Egypt. In southern Africa it is found in South Africa, Namibia, Zimbabwe and Mozambic. All species are somewhat similar in apperance and diverge mostly in coat patterns, shape of the skull, dental formula and facial markings. For instance,  Rock hyraxes have dark patches around the eyes while bush hyraxes have white patches. Tree hyraxes have no patches around the eyes. Aside from their physical differences, the various species live in different habitats except bush and rock hyraxes which live in rocky outcrops or kopjes in savannahs and the tree hyraxes which live in more forested environments. Focus will be especially on bush and roch hyraxes which more commonly encountered. 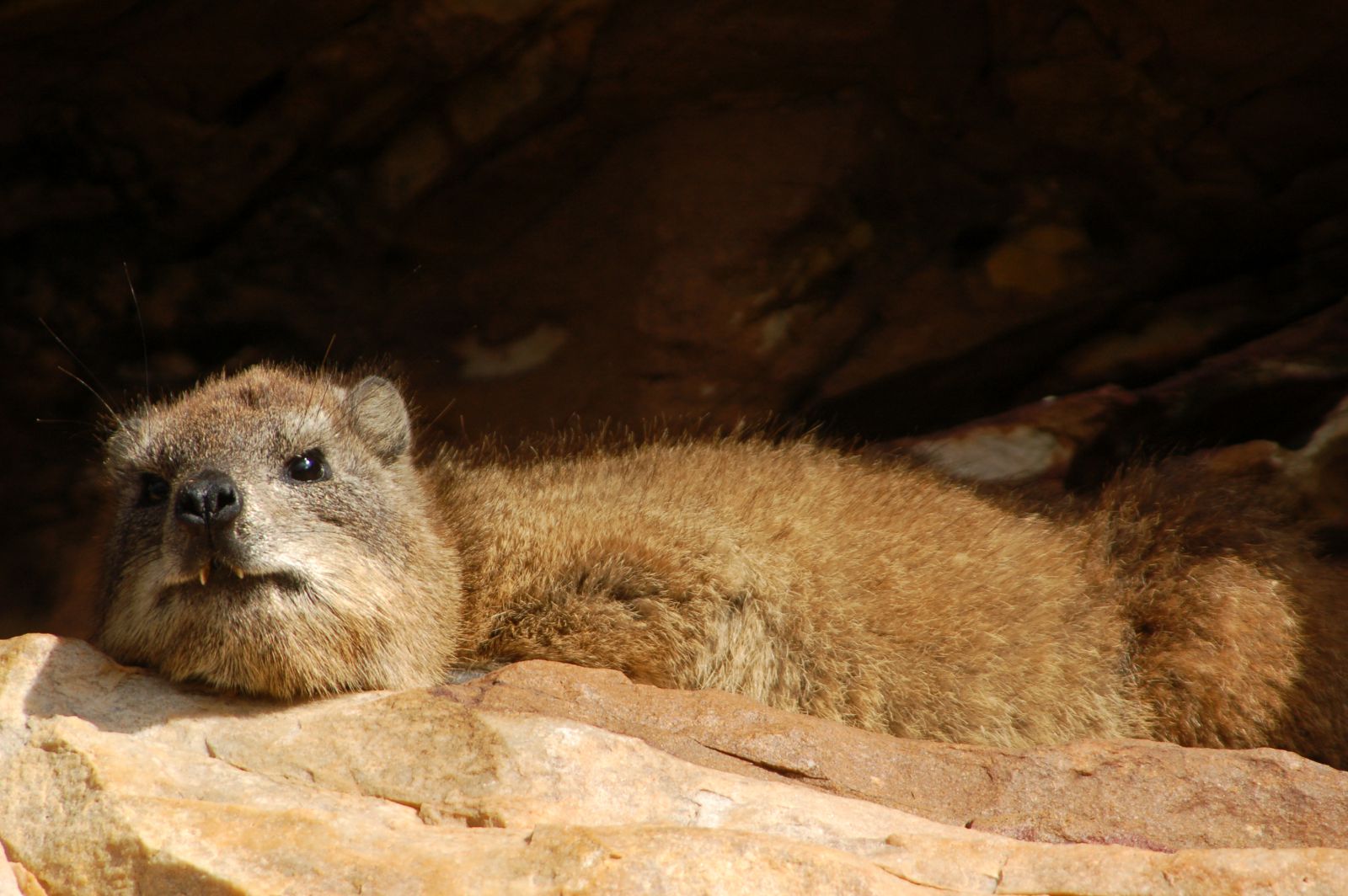 Habitat: Very adaptable, hyraxes may be found from rainforests to semi-deserts and mountain ranges mais they are found mostly in savannah environment. Their main habitat requirement is the presence of rocky outcrops with many cavities when they can take refuge. Hyraxes rarely leave these rocky outcrops.

Food: Rock hyraxes are grazers and feed on a wide diversity of grasses. 79 species of grasses have been recorded in their diet (Hoeck & Bloomer). They feed also on forbs, pods, tender shoots and fruits. They browse especially during the dry season. Bush hyraxes are browsers and feed mostly on twigs, bark, foliage, fruits and forbs. The different diet of both species enable them to share the same rocky outcrops when they are sympatric and avoid competition for resources. Communal feeding bouts occur under the surveillance of a sentry who will send a sharp alarm calls if a predator is spotted. This enables hyraxes to venture a bir farther away from their holes. Hyraxes are diurnal and feed mostly early in the morning from 7 to 9 am and in the late afternoon when the temerature is cool enough. They rarely spend more than 2 hours foraging and spend the rest of the time resting. They are especially sensitive to heat and humidity. Hyraxes have their water needs met through their food and may go without water thanks to their kidneys which limit water loss. Yet, they will drink if they have the opportunity.

Behavior and social structure: Hyraxes are gregarious and live within colonies composed of several family groups which may number as much as 100 individuals. The family groups include one territorial male, 3 to 7 related adult females, peripheral and dispersing non dominant males, subadult females and young of both sexes. The number of individuals in a colony is determined by the size of the rocky outcrop on which they live.

The territorial male dominante all other members of the colony and protects it against predators and tresspassing from other males. A wide array of shots, calls and grunts to indicate his status and deter other males or encourage submission. Dominant males are especially aggressive against other males during the rut. Among non-dominant males, one may distinguish peripheral males which live at the periphery of territories of territorial males in the hope to eventually displace them when the time comes or to takeover a vacant territory. Dispersing male are young males who have been evicted from their natal colony to establish themselves in another colony to ensure gene flow and genetic diversity. They have to undertake relatively long journeys in open ground leaving them especially vulnerable to predators.

Females stay in their natal colony and live within home ranges which more or less correspond to male territories which basically equate the total surface of a rocky outcrop which may reach several thousands m2. There is no hierarchy among female groups but the oldest and biggest females often lead.

Reproduction: There is only one reproduction period per year and females all give birth at the same time in timeframe of 3 weeks. Synchronized births enables hyraxes to mitigate the impact on predation. Females may give birth to 1 to 4 young. During the rut, when a male identifies a female in oestrus, he gives a call and gets closer while shaking his head with dorsal crest erected and penis in erection. Once close to the female, he often rests his head on her rump as a prelude to mating. After mating, the female turns and tries to bite the male and eventually chases him away.

Females do not isolate during birth but are aggressive to other hyraxes which get too close. At birth, the young climb on the back of the mother. Young are weaned after 6 months.

Predators: Raptors and especially Verreaux' eagle take a major toll. However hyraxes are preyed on by a vast host of predators including snakes (mambas, cobras, pythons, vipers) which are often found on the rocky outcrops where hyraxes live, caracals, jackals, hyenas and leopards. Lions are occasional predators. To protect themselves from predators, hyraxes find refuge at the slightest alert in the cavities found on the rocky outcrop on which they live

Best places to see it: Often seen around lodges in most national parks, the Cape reserve in South Africa supports huge colonies of hyraxes which are unusally relaxed around people.