The vervet is one of the most commonest and widespread species of primates found in the savannash of Eastern and Southern Africa. From the cerccopithecidae, it belongs to the Chlorocebus genus with three other very similar looking savannah species which include the green monkey (Chlorocebus sabaeus) found in Western Africa (Senegal, Mauritania, southern Mali, western Niger, Benin, northern Ivory Coast, Guinea and Sierra Leone). The tantalus monkey (Chlorocebus tantalus) is another related species found where the range of the green monkey ends up to south-western Kenya and norther Uganda following the sahelian stip and crossing through the Central African Republic, Cameroon, Nigeria, Togo, Chad and southern Niger. In the East, in Ethiopia and eastern Sudan, one finds the gribet monkey (Chlorocebus aethiops). The vervet monkey is found in Eastern and Southern Africa from Ethiopia to the Cape by following the eastern coast of the continent. Five subspecies are found within this range which differ only through the hue of their coat. 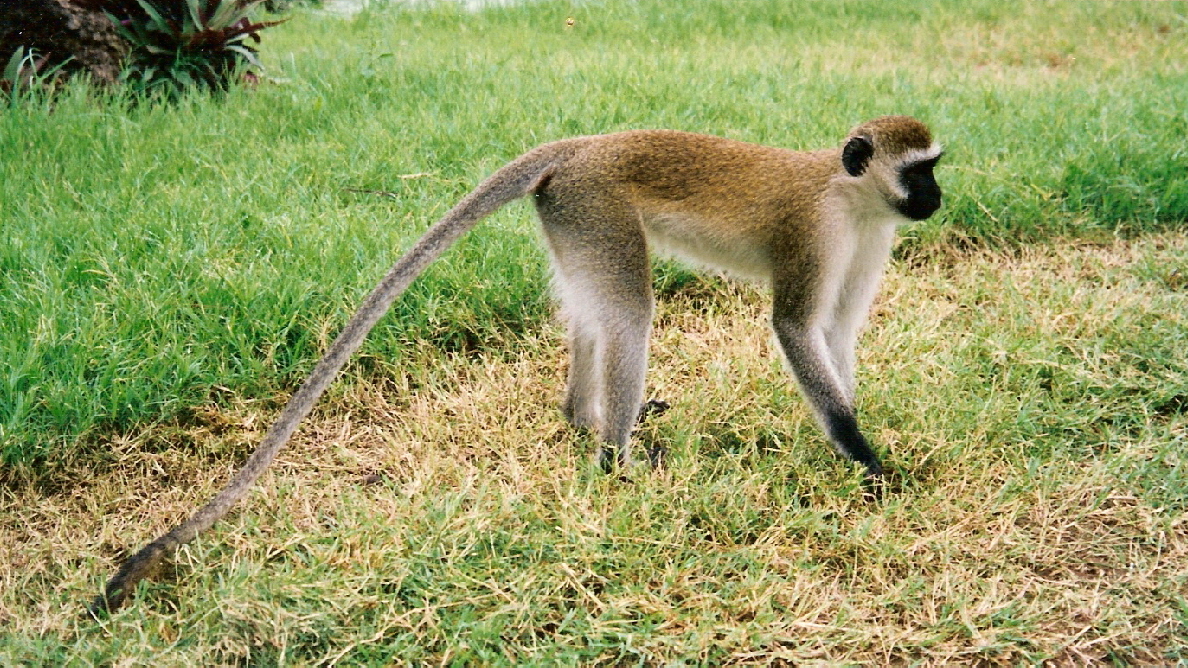 Habitat: The presence of trees where they can seek refuge is a habitat requirement even if vervet monkeys may be found in open habitats such as savannahs. They are nonetheless found in all types of forested habitats but dense forests, forest-galleries, mesic savannahs and woodland savanahs.

Food: Vervets are omnivorous. They feed on fruits, seeds, pods, various species of grasses, flowers, invertebrates, birdlings, small reptiles like lizards. They also feed on eggs. Vervets forage as much in trees as on the ground. Diurnal; they start foraging at daybreak beginning with the tree in which they spent the night. They rest in the hottest hours of the day and resume feeding bouts in the afternoon until dusk. When night falls, they find refuge in trees where they spend the night.

Social behavior: Vervets' social structure is quite complex. Troops comprise 20 individuals in average but may number as low as 10 individuals and as much as 50 or even more. Each troop is composed of several families which live on a territory several dozens of km2 large. Females remain in their natal troop all their life but males disperse when they reach puberty and settle in foreign troops.

There is a linear hierarchy among troops within each sex which is determined at birth. Young females inherit a social status which is just slightly inferior to that of their mother. Hierarchy between males is more flexible. Dominant males display their status through various shots and postures. One of the most significant postures indicating dominance is for a dominant male to curb his tail over his back while circling or approaching a subordinate in order to expose the blue and red markings where the scrotum and perineum meet. Hierarchy has consequences on access to food and grooming. Dominant females have preferential access to food which will benefit their young. Similarly, subordinate individuals groom dominant ones but will in turn benefit from their support should they be subjected to attack. Submission is displayed by quick side-glancing, gaping with the mouth and head bobbing. Vervets are able to recognize each vervet's social status and the shout of each individual.

Females and males play an equal part in the defence of the territory albeit for different motives. Females defend feeding resources while males defend access to females to strange males. When two troops meet at the border of their respective territory, members of each troop observe one another, and use several defensive behaviours and postures. They stare and expose their eyelids, shake branches accompanied by a concert of shouts in a bid to deter the opposing troop.  Males may also expose their conspicuous red penis. These observation rounds may degenerate in full chases. Vervets may react the same towards competing species of monkeys such as red tail monkeys and blue monkeys which are more arboreal.

Reproduction: It seems that reproduction is seasonal and happens during the dry season. When a female is receptive, she stops and presents to a passing male. Conversely, she will avoid males, remain unconcerned if non-receptive and will defend herself should males prove too persistent.

Females give birth to one child after a gestation period of 165 days. The baby is weaned after three months. Mothers carry their infant during the first three months up to a month but with less frequency as time goes by. Infants socialize with other members of the troop at an early age in order to play, be groomed and cuddle.

Predators: Due to their small size, vervets are highly vulnerable to predation. Vervets most common predators are large raptors such as the martial eagle or the crowned eagle, leopards and African rock pythons. Occasional predators include lions, hyenas, cheetahs, jackals, caracals, crocodiles. Although there is no case of predation on records, vervet alarm call when they encounter cobras, mambas and puff adders being well aware of the threat they represent even though they are no on the menu of those snakes.

Vervet monkeys are able to rank their predators based on their dangerosity to themseves and have specific alarm calls for each category.

Best places: Most parks and reserves on the continent and especially close to the lodges.