The bushbuck is a mid-sized antelope similar in size to a roe deer belong to the tragelaphinae family (spiral-horned antelopes). Its range is the widest of all African antelopes going from Senegal and Gambia to South Africa including Eastern Africa. It is absent from the Sahara, the Congo Basin and rare in the Sahel region. Because of its wide distribution, as much as eight subspecies may be distinguished and gathered into two groups: the scriptus group includes the Western and Central African races which more vividly colored with more pronounced and numerous white horizontal and vertical stripes on the flanks while the sylvaticus groups have darker coats with much less delineated white stripes which can also be absent. The Western bushbuck (Tragelaphus scriptus) has vivid and brigh rufous red coat with clearly marked white vertical stripes on the flanks and horizontal stripes on the shoulders while the Menelik bushbusk (Tragelaphus meneliki) of Eastern Africa or the Cape bushbuck (Tragelaphus sylvaticus) have a much darker coat with very light or no striping. In all subspecies, only males bear horns. 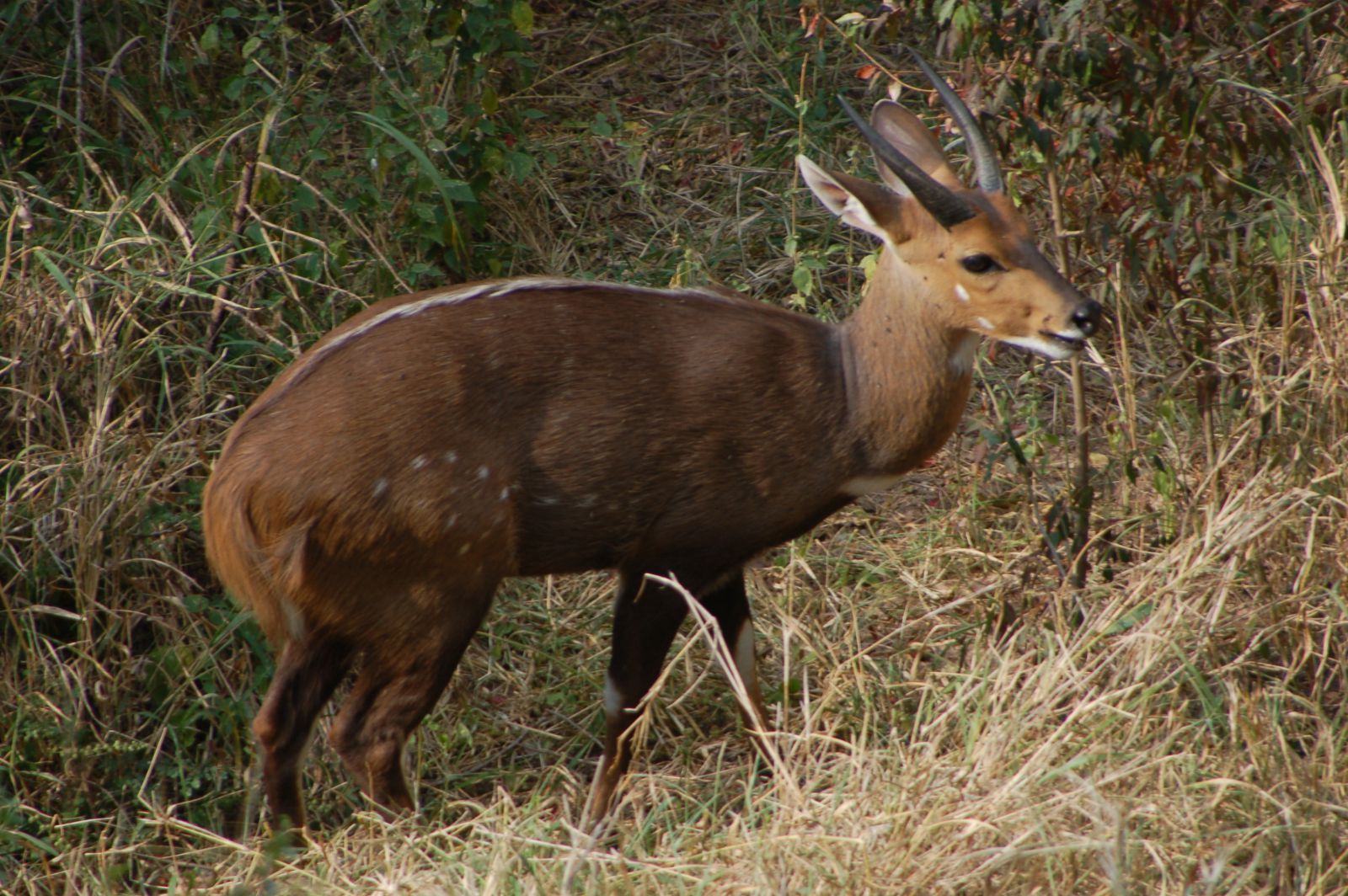 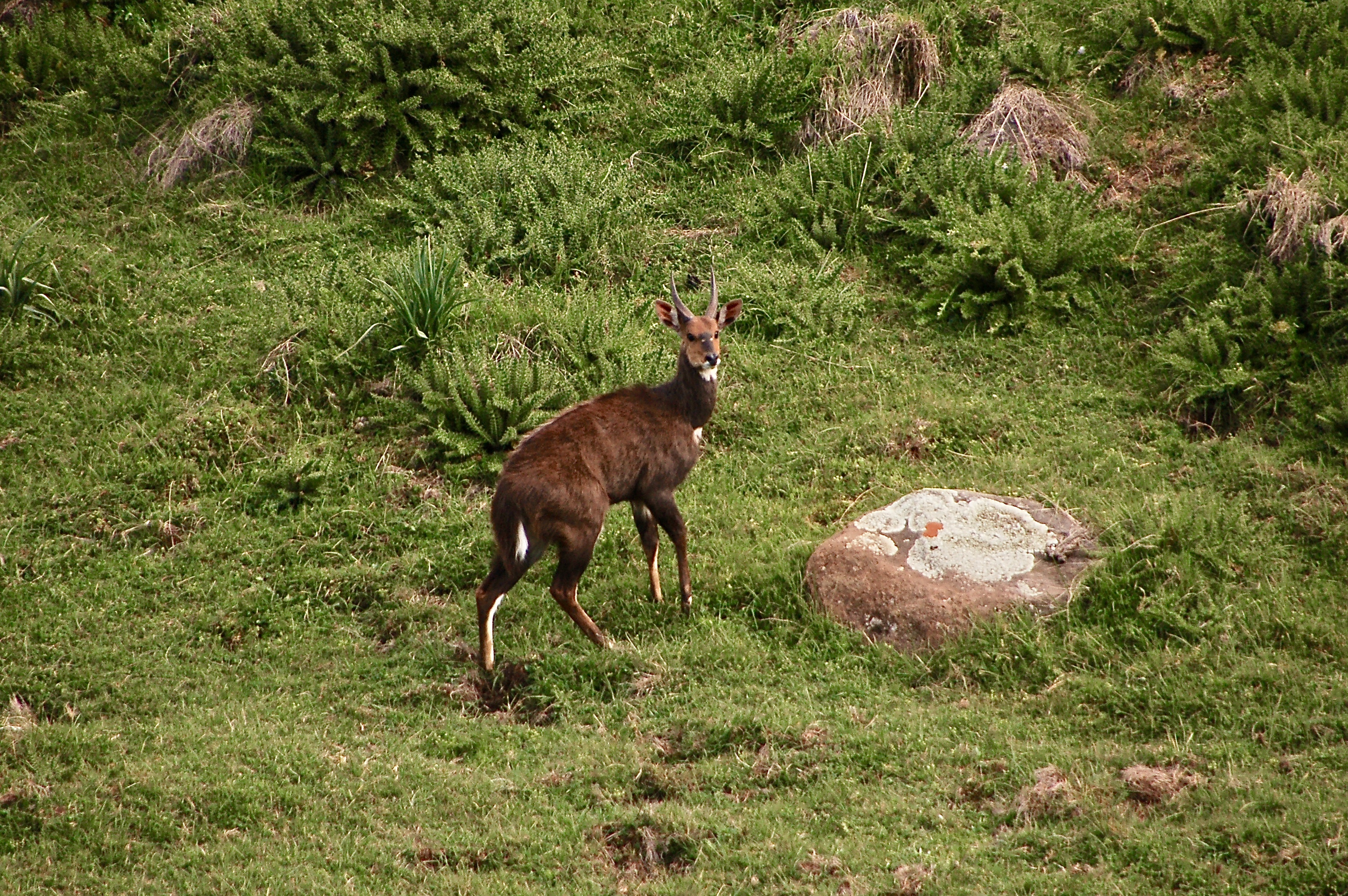 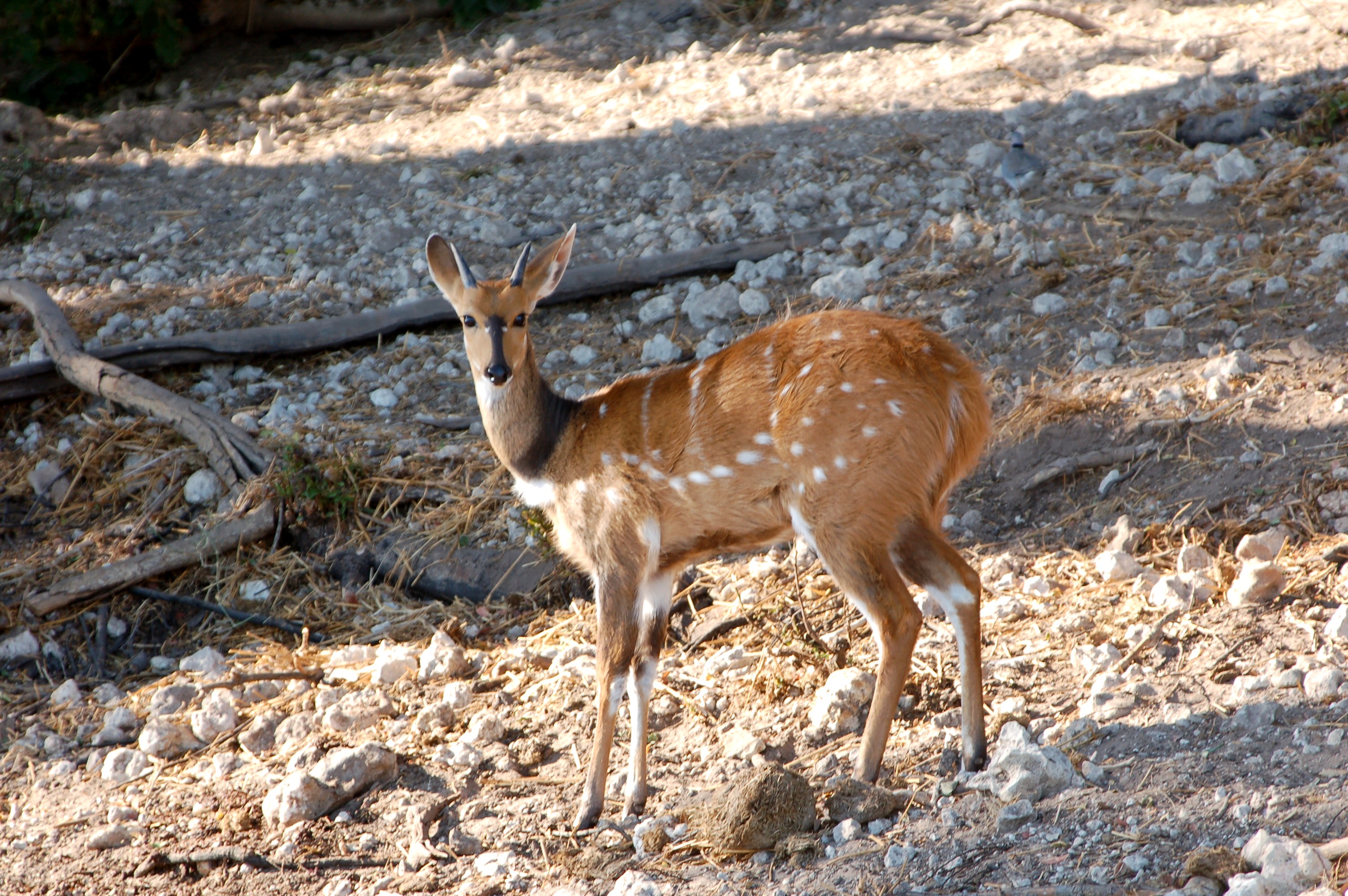 Habitat: Very adaptable, bushbucks are found in diverse woody habitats from riverine forests to wooded savannah, miombo woodlands, thickets, marshes. They avoid open areas such as short-grass savannahs, steppe, plains, deserts. It is not found either in dense moist equatorial forests. Bushbucks are always in the vicinity of a permanent source of water.

Feeding ecology: Browsers mostly. Bushbucks feed on fruits, leguminous plants, pods especially acacia pods, leaves from shrubs and trees. They are especially partial to young green shoots and leaves. Low fibre plants are preferred. Bushbucks often associate with baboons in the hope to capitalize on the fallen fruits that they drop in their wake. This may seem as an unnatural association since baboons are a threat to very young bushbucks but it also increases predator detection.

Behavior: Mostly solitary similarly to most forest antelopes such as duikers. However, bushbucks are not asocial. It is not unusual to find gathering up to a dozen individuals when food is plentiful. Bushbuck couples are also a common occurrence.

For most authors, bushbucks are not territorial but this is still a hotly debated aspect of bushbuck behavior. According to a study from Wronski et al. in Uganda, related females are organized in matrilinear clans defending home ranges against foreign females. Within home ranges, females usually live by themselves in a core area. Yet, they do not show hostile behavior when they meet with other related females. Female homeranges overlap considerably.

This is not the case for male homeranges which do not overlap and may be considered as exclusive areas which are marked with the oily secretions on the forehead and vegetation thrashing with the horns. They may also stand erect and conspicuously on elevated ground like topis or hartebeests which are territorial antelopes leading some zoologists like Apio and Wronski to conclude that bushbucks are territorial. Yet, bushbucks do not seem to actively defend their territory. Defense of an exclusive area is one of the main criteria to identify territorial behavior in the Animal Kingdom and especially with antelopes. When two males meet, they usually execute a lateral display with a stiff-legged walk, head erect. They will also arch their back and raise their white dorsal crests. When they fight, males lower their heads with present their horns before interlocking them. Each try to stab and fore the flanks of its opponent. Fights may be fatal and thus remain rare. Young males are usually chased from an exclusive area. It was previously thought that an age-based hierarchy among males but it seems this theory has been disproved.

Bushbucks spend 40% of their time foraging, 50% resting in cover, and 12% roaming (Waser, see also Estes). They are both diurnal and nocturnal but mostly nocturnal.

Reproduction: Bushbucks reproduce all year long. Gestion varies in length from 6 to 7 months. The fawn remains hidden in vegetal cover for the first few months following parturition before it can follow its mother. Reproductive behavior is similar to that of other antelopes. The male urine tests the female receptivity by following her in head-low posture in an attempt to rest its head on her rump prompting her to urinate. The female uses a specific crouch to do so.

Predators: Bushbucks are preyed upon by all big predators and especially leopards which are plentiful in habitat frequented by bushbucks. African wild dogs, spotted hyenas, lions, rock pythons and crocodiles also prey on bushbucks. Bushbuks use unusual evasive behavior by freezing in dense vegetation or lying low on the ground in the hope to go undetected.  Lions have been seen walking close to a bushbuck standing still without detecting it. If they are detected, they dive into cover. Young bushbucks are preyed upon by baboons, chimpanzees, honey badgers, caracals, servals, jackals and raptors.

Best places to see it: Although widespread and found in most national parks and reserves, the bushbuck cryptic habits make it unpredictable and hard to observe.