One of the biggest land mammals after the elephant and the rhino. Hippos are widespread in most watercourses in Subsaharan Africa even if its range has shrunk significantly especially in Western Africa. 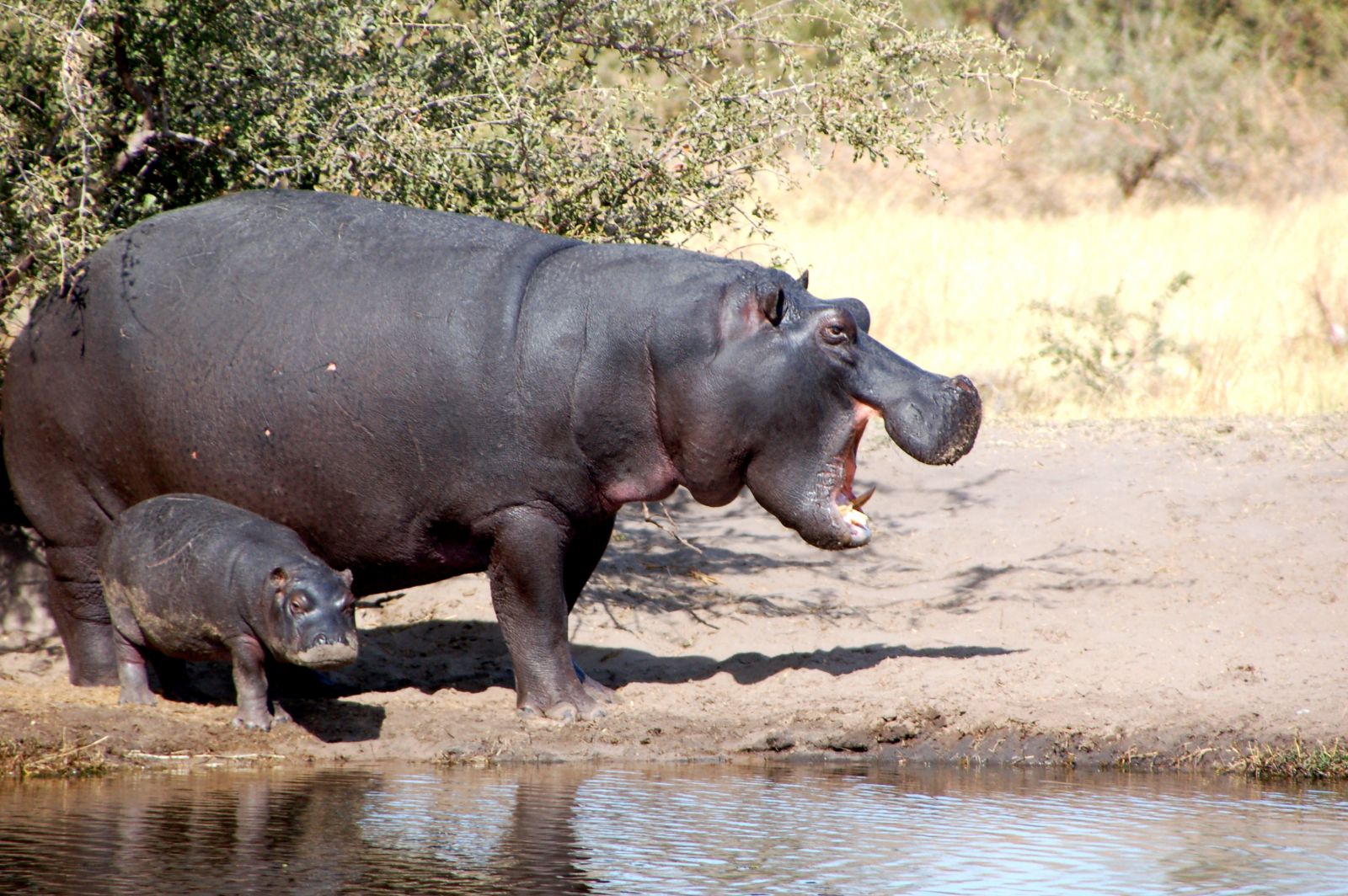 Habitat: Hippos are extremely dependent on water for thermoregulation puposes. Thus, they may be found in any fresh water body be it a river, a lake, marshes, swamps, mud holes, ponds, etc. It may also be found in estuaries such as St Lucy in South Africa where they even venture in the sea. Being grazer, it is essential for the hippo that the water body is in the vicinity of grassy savannah or any other form of grasslands where they can graze at night or in the early morning. Hippos are also found in gallery forests and woodlands even dense forests provided that some grassy clearings are nearby (Uganda, Democratic Republic of the Congo).

Food: The hippos is mostly a grazer but can browse occasionally (15% of the diet according to Cerling). Grasses form the major part of their diet but also woody plants and fruits fallen from trees. Their large jaws and mouth make it a bulk and unselective feeder able to clasp much grass in one mouthful. Their prehensil lips enable them to crop very short grasses.

Like elephants, hippos have an impact on the environment. When found in high density, they will reduce grazing areas and grasses which favor the spread of fires. When grasses disappear through overgrazing, they are replaced by bushy vegetation which are not fed upon by hippo, the density of which decreases as a result. However, the presence of bushy plants favors fires which will destroy this bushy vegetation which will be replaced by grasses on which hippos and other herbivores like waterbucks feed upon. It is thus a cycle in which the hippo plays a instrumental part. However, overgrazing by hippo can also be destructive and displace other herbivores such as he waterbucj (Spinage). In the Okavango, hippos create pathways and channels favorning the circulation of water which benefits the whole ecosystem. It is also a fertilizer through the dissemination of its feces which contain seeds which favors growth of vegetation in a given ecosystem.

Despite, its sharp canines or tusks, the hippo is not a carnivore even if it may happen that it kills antelopes such as wildebeests or impalas who probably had the misfortune to trespass on his territory. It is quite difficult to explain this behavior as the digestive track of hippos is not adapated to meat consumption. It may be that by feeding on dead animals it fulfills its needs in minerals which are usually absent from its diet.

Behavior and social structure: The social structure of hippos vary depending on whether they are on land or in the water. In the water where it spends most of its time, hippos are highly gregarious. A hippo herd may have as much as 20 to more than hundred individuals who tend to closely bunch together especially during the dry season when water levels recede.

A hippo herd is led by a territorial male who is dominant over all hippos dwelling in his territory. These territories are composed of river sections and their corresponding shorelines which may be as long as 50 to 100m or up to 250 to 500 m in lakes (Estes; Klingel). The territorial male has exclusive mating rights within his territory even if this does not prevent him from being challenged by another male. It seems that size and strength play a role in determining hierarchy in hippos. Territorial males usually keep their territory for many years from 4 to 8 years and are only forcibly removed.

Territories are marked by the dispersal of feces and urine through the rapid wagging of the tail. Feces do not delineate boundaries but provide information on the status of the releaser and help to orient other hippos who also add their on feces on the territory when they enter or leave the waters. The territory is also marked by the mere presence of the male who uses several postures and rituals to assert his dominance including the yawn exposing the impressive tusks, the roaring, grunting, powerful exhalation, head shaking and even bites. These postures are often used by two neighbouring territorial males when they are in presence of one another at the boundary separating their territories. Both males will spread their feces by wagging the tail while parallel walking with head held high. When a territorial male leaves his territory, he automatically loses his status and behaves submissively on the territory of the male in which he tresspassed. Territorial males tolerate other males provided that they behave submissively. Submission is expressed by a slight opening of the mouth and by running away if lunged at or lying down. It may happen than a dominant male spread his feces on the head or back of another.

Aside from territorial males, hippo herds may divided in two sub-groups : nurseries composed of cows and calves and bachelor herds. These two group may mix up. Bachelor herds regroup subadult males and adults with no reproductive rights which are tolerated by the dominant males provided that they remain submissive. They often spar between one another clashing jaws against jaws. Hippos are relatively aggressive animals and may fight quite often. Serious fights happen mostly when a male challenges the territorial male in a bid to displace him if he is of equivalent size or strength. If they are in the water, the two fighters break to the surface and ram each other jaws against jaws and try to bite one another until one caves and runs away. Fights can happen on land too after lengthy observation rounds with jaws wide open. Protagonists often end up covered with blood and death is not unheard of.

Nurseries enable mothers to better protect their calves againt trampling, drowning and attacks and even killings from the males and especially the territorial male. Infanticide is quite common in hippo (Verheyen) probably to boost mating opportunities. Mothers do not hesitate to coordinate their forces and mob attacking males including the dominant males in defense of their calves.

When hippos go on land, they become asocial and solitary, each one of them going their own way. They try to remain as little as possible on land. Hippos mostly go on land to feed at night where they do not have bear the heat and burn from the sunon their sensitive skins. They graze for up to five hours and return to the water (Estes) before dawn.

Reproduction: Hippos reproduce all year long but in some regions like in Uganda birth peaks are recorded during the rainy season. The dominant male sniffs the females rump to determine receptivity to which they react aggressively. When a female in oestrus is identified, the male pursues her until she turns to face hip and lock jaws with him. Once he subdues her mating can proceed during which the female's head is submerged.

The cow isolates to give birth after a gestation period of 240 days. The calf weighs 50 kg at birth. During the first ten days, the cow and calf isolate themselves from the herd and the cow will defend her calf savagely against all potential predators and any member of the herd. After a few weeks, the calf can follow the mother in the water and join nurseries. The calf can suckle under water.

Predators: Adults have no or very few predators. Only a determined pride of lions can succesfully tackle and bring down an adult hippo. To do so, they jump on the back of the hippo and bleed him to death with several bites in various places. Hippos are extremely difficult preys for lions and it is not unheard of lions being killed by a hippo during such attacks. Nile crocodiles regardless of size do not pose of threat and adult hippo dominate them. It may happen for adult hippos to be killed by elephants and there is one recorded case of an adult hippo being gored to death by a herd of buffalos. Conversely, it may happen than hippos attack elephants and rhinos when they disturb them without fatal outcomes.

Best places to see it: Present in all major parks and reserves with watercourses and ponds. There are however some hot spots such as Murchison Falls and Queen Elizabeth (Kazinga Channel) in Uganda, Selous and Katavi in Tanzania and South Luangwa in Zambia.