Like the impala, warthogs are ubiquitous and easily encountered in most national parks. It is member of the suidae family which also includes in Africa the bushpig and the giant forest hog. There are two species of warthogs in Africa: the common warthog (Phacochoerus africanus) which is the most widespread species in all Subsaharan Africa except the Congo Basin and the desert warthog (Phacochoerus aethiopicus) found in Northern Kenya, Somalia and southern Ethiopia. The two species are very similar but may be distinguished by their ears. The common warthog has leave-shaped ears while the desert warthog has bigger ears the tip of which points backwards. Additionally, the desert warthog has no upper incisors and rudimentary lower incisors. Both have very similar ecology. 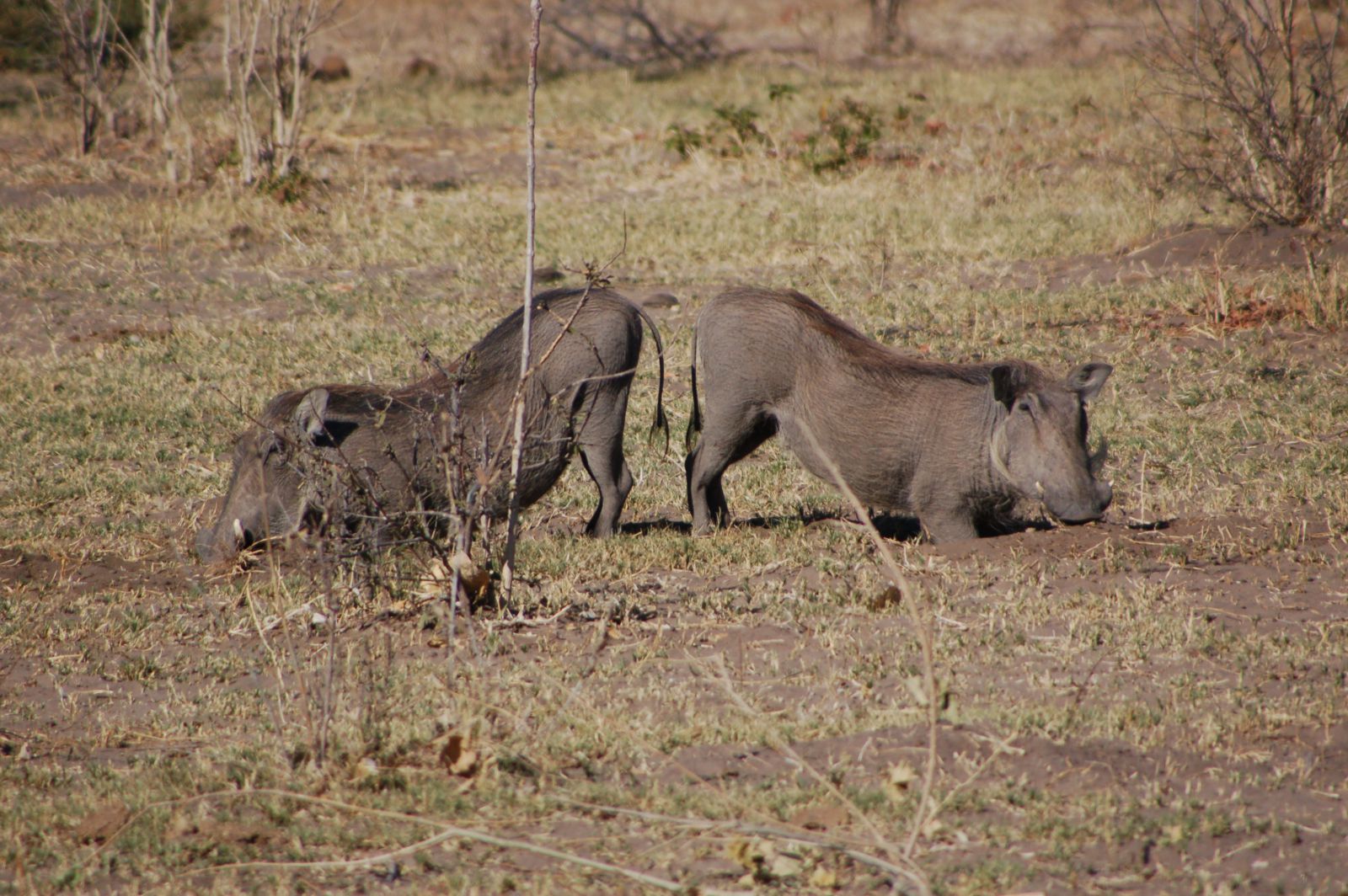 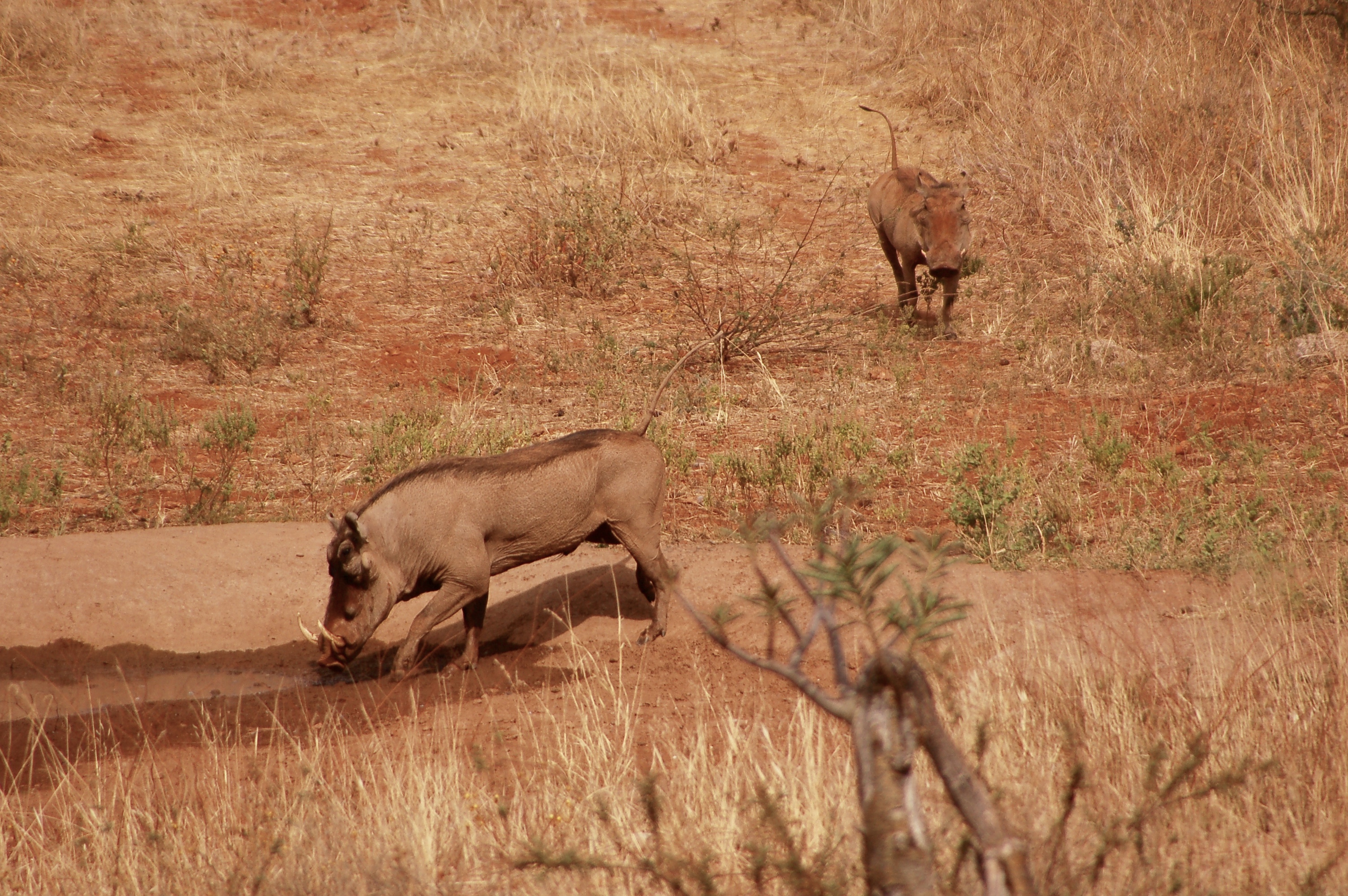 Habitat: Suidae adapted to all types of savannahs from grassy savannahs, grasslands, woodland savannahs, dry savannahs, mesic savannahs, but also open woodlands, bush. Warthogs avoid dense forests where the giant forest hog dwells. Although it can survive in arid environments, presence of water remains an essential requirement to their presence

Behavior and social structure: The warthog is a gragarious species which forms matriarchal sounders composed of an adult female with her pigglets and one or two subadult females from a previous litter. The biggest sow leads the herd and decides on all its activities and movements. Sounders have  5 individuals in average but sometimes several sounders can gather temporarily numbering as much as 20 warthogs.

After a yeard, young warthogs are evicted from the sounder. Young boars join bachelor herds while young sows wander alone and may be joined at some point by other related sows. Mature boars are generally solitary. The join sounders only on a temporary basis when a sow is in oestrus.

Warthogs are usually sedentary and remain in home range which is marked through their suborbital and lip glands. It is within this home range that they settle within a network of burrows and tunnels which may number as much as 10 entrances. These burrows are refuges against predators, cold weather and the rain. Home ranges of several sounder may overlap. More often than not, these burrows were digged up by aardvarks. Warthogs enter their burrow by walking backwards in order to be able to face an approaching predator if needed. Members of a sounder entertain close bonds. Members salute one another by rubbing their snout or through naso-oral or naso-nasal contacts or will sniff glandular areas. Allogrooming is also practiced.

Even if males are solitary, there is a hierarchy between them based on size on strength which was established when they were pigglets or during their bachelor days. Males are usually tolerant with one another but may clash over a female which is one of the reasons warthogs may fight over. Other causes of conflicts which involves both males and females, are competition to take possession of a hole or a mud pond. When warthogs are antagonistic to one another, they approach each other slowly in erect posture with the mane raised. One will then suddenly rush and charge the other who will most likely flee. If the other warthog stands his ground, it will degenerate into a fight where the two opponents will clash forehead against forehead while slashing with their upper tusks and their snout. It may happen that the weaker of the two, may lie down at some point with mane lowered while squealing to show submission. Generally, it will try to flee as soon as he can. Another sign of submission is to lie on the back and show the belly.

Warthogs are diurnal. They go back to their burrow before dark. Usually, it it is warm enough, they will emerge in the early morning to forage, but may remain in the burrow until it gets warmer. They usually forage in the morning and in the late afternoon.

Reproduction: Warthogs reproduce all year long but in regions where there is a clear alternance between dry season and rainy season, the rutting period usually occurs at the end of the rainy season or at the beginning of the dry season. During the rut, dominant males go from sounder to sounder to find a female in oestrus. They can be identified by the dark secretions flowing on their hind legs and frequent urination. Once identified, the male warthog runs after her prompting her to flee. The follows her in a bouding gait while clapping his jaws and salivating. Once he catches up to her, he rests his chin on her rump to appease her as a prelude to mating.

The sow isolates to give birth to a litter of 1 to 4 pigglets. The gestation period is 6 months. The sow remains in the burrow with the pigglets during the first week. During the first few weeks following parturition, the pigglets will suckle frequently from 12 to 17 times a day. They are weaned after 6 weeks. In the first weeks the neonates are particularly vulnerable to cold and rain waters flowing through the burrow.

Predators: Warthogs are no easy prey. They fight bravely when cornered. When they detect a predator, they will usually flee and take refuge in their burrow but will defend themselves valiantly if caught or to defend their young. To do so, warthogs use their sharp tusks which can cause gashing wounds which can get infected. There are cases on records of lions or leopards being gored and killed by warthogs. Cheetahs actually avoid adult warthogs. Lions and especially leopards are the adults warthogs' main predators. Lions do not hesitate to dig warthogs out of their burrows and leopards often wait at the exit of a burrow for a warthog to come out. Yet, this is not without risks for the cats, as it is especially dangerous to follow a warthog down his burrow. Killing it is also especially difficult due to the neck girth and thickness. Spotted hyenas are occasional predators of adult warthogs especially if they forage singly. Packs of wild dogs may prey on adult warthogs. Nile crocodiles are always a threat at waterholes. Pigglets are preyed upon by all predators from lions to hyenas and jackals in addition to baboons, honey badgers, pythons, caracals and raptors.

Best places to see it: Very common and easy to see in all the major parks and reserves in Eastern and Southern Africa which does not mean that it is easy to photograph. Warthogs have an important flight distance and it is difficult to get really close.