It is the rarest zebra's species and the biggest wild equid in the world. It is only found in Eastern Africa and more especially in Northern Kenya and Southern Ethiopia. It may be distinguished from the plains zebra by its bigger size, different stripe patterns and rounder and bigger ears. The stripes are much thinner and numerous on the flanks than in the plains zebra. Its ecology differs radically and is closer to that of onagers and some bovids rather than plains zebras. 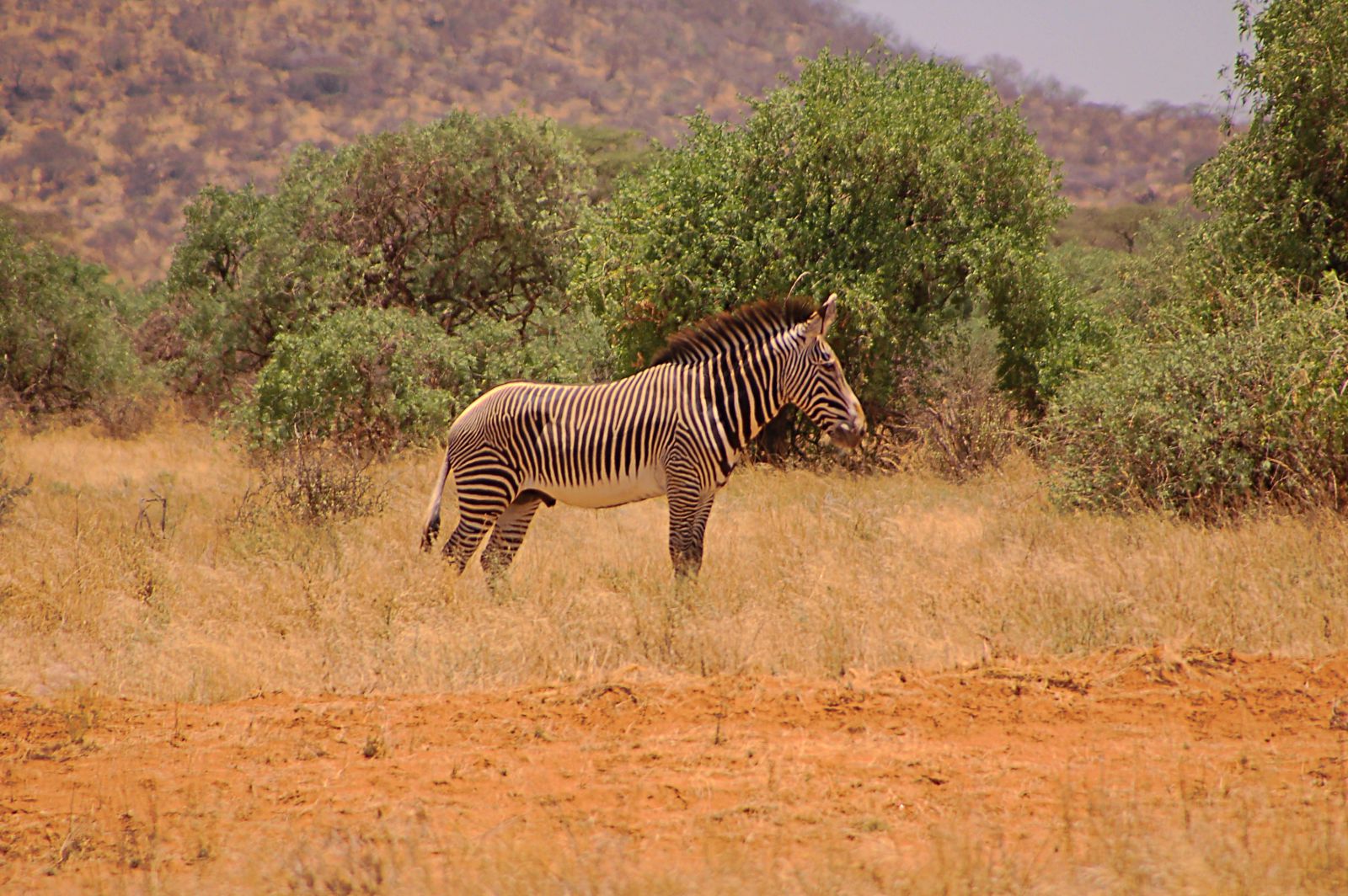 Food: Like plains zebras, Grevy's zebras are mostly grazers but contray to the plains zebra they may browse during the dry season. 30% of their diet is composed of foliage (Rowen & Ginsberg). They are able to feed on fibrous plant species which are unpalatable to other grazers giving it a competitive advantage. Although less dependent on water than the plains zebra, a permanent source of water remains a habitat requirement.  Grevy's zebras are mostly diurnal and spend up to 60% of their time foraging.

Behavior and social structure: Grevy's zebras social structure is completely different than that of the plains zebra. Three social structures can be distinguished: groups of mares with foals, territorial stallions and bachelor herds of stallions. Groups of mares and foals form flexible groups which could be described as fusion-scission as these gatherings are temporary without any visible hierarchw and members join and leave the group whenever they want. It actually quite common to see mares alone with their foals of the two latest generations.  Mares and foals roam on homeranges which may average several thousands km2 in size since Grevy's zebras live in arid landscapes with scarce feeding resources. It may happen that groups of mares and foals mix up with bachelor herds of non-territorial males to form gatherings of several hundreds of zebras. These gatherings are temporary and may be explained by the exceptional abundance of food in a given locality.

Non-territorial males gather in bachelor herds and are usually young stallions which just left their mother or the breeding herd where they originate in search of a territory. They are tolerated on the territory of territorials males unless there is mare in oestrus in which case they will be chased by the territorial male.

Territorial male lead a solitary life on their territory which average 10 km2. The establishment of a territory is extremely strategic as resources are so scarce in the arid environment where Grevy's zebras live that if male establishes himself on a territory rich in feeding resources, the more like will it attract females and boster his chance to reproduce. The territory is marked through dung piles strategically placed on the border of territories but also through several postures and much braying. When two neighboring territorial males meet, they get close to one another, head high, arched neck and touch nose before one lays his head on the rump or neck of the other followed by defecation bout. Domination is indicated by the erect and proud posture. It this not enough to deter a rival male, the stallion may lower its ears and threaten to bite while swishing his tail on his rump. This posture is also used more generally when Grevy's zebras feel threatened. Fights are rare among Grevy's zebras even among males usually occur when two males compete for a female in oestrus. Young stallions often joust when they are in bachelor herds in order to determine a hierarchy. Forms of fighting are similar to those found in plains zebras. Contestants usually fall on their knees and circle each other while trying to bite the hock of their opponent or bite the neck and head. They may also rear and deliver blows with their forehooves. Although solitary, the territorial stallion is not asocial and appreciates the presence of subordinate males provided that they do not its exclusive mating rights on his territory. Females also benefit from the presence of territorial males who protect her from non-territorial males.

Reproduction: Mating period is generally at the beginning of the rains. The mare attracts the attention of the stallion by frequent urinating. The later approaches slowly in erect posture and by sniffing her rump. The female may turn to sniff his nose and then suddenly turns back before running away with the male in close pursuit. The later will try to mate while running. After appeasing the female through much braying and domination postures, mating may begin.

The gestation period is one-year long. The female is very aggressive in the first days which follo birth and chase zebras which get too close from the foal. The foal is weaned after one year and leaves the mother after three years.

Predators: Lions, spotted hyenas and to a lesser extent pack of wild dogs when they are still present are the adults main predators with the Nile crocodile. However Grevy's zebras an even more difficult prey than plains zebras since they are much bigger. Its kick is lethal and even lions will a have hard time subduing this fierce animal which can break their jaws. Cheetahs and leopards prey on foals and subadults just like hyenas.

Best places to see it: Samburu, Meru and Laikipia in Kenya are the sole places where you can easily observe Grevy's zebras. They share the pastures there with plains zebra. They may be found in southern Ethiopia.