There is also another species of African buffalo, the forest buffalo (Syncerus nanus) dwelling the equatorial rainforests of Central Africa. It is still debated whether it should be considered as a subspecies which used to be the case or a full species. It seems that it has been elevated to full species. It is much smaller than the savannah buffalo with a maximal weight of 320 kg against 800 kg in average for a full grown savannah buffalo. Contrary to the late which is a typical mesic savannah inhabitant, forest buffalo is found solely in rainforests and clearings therein. 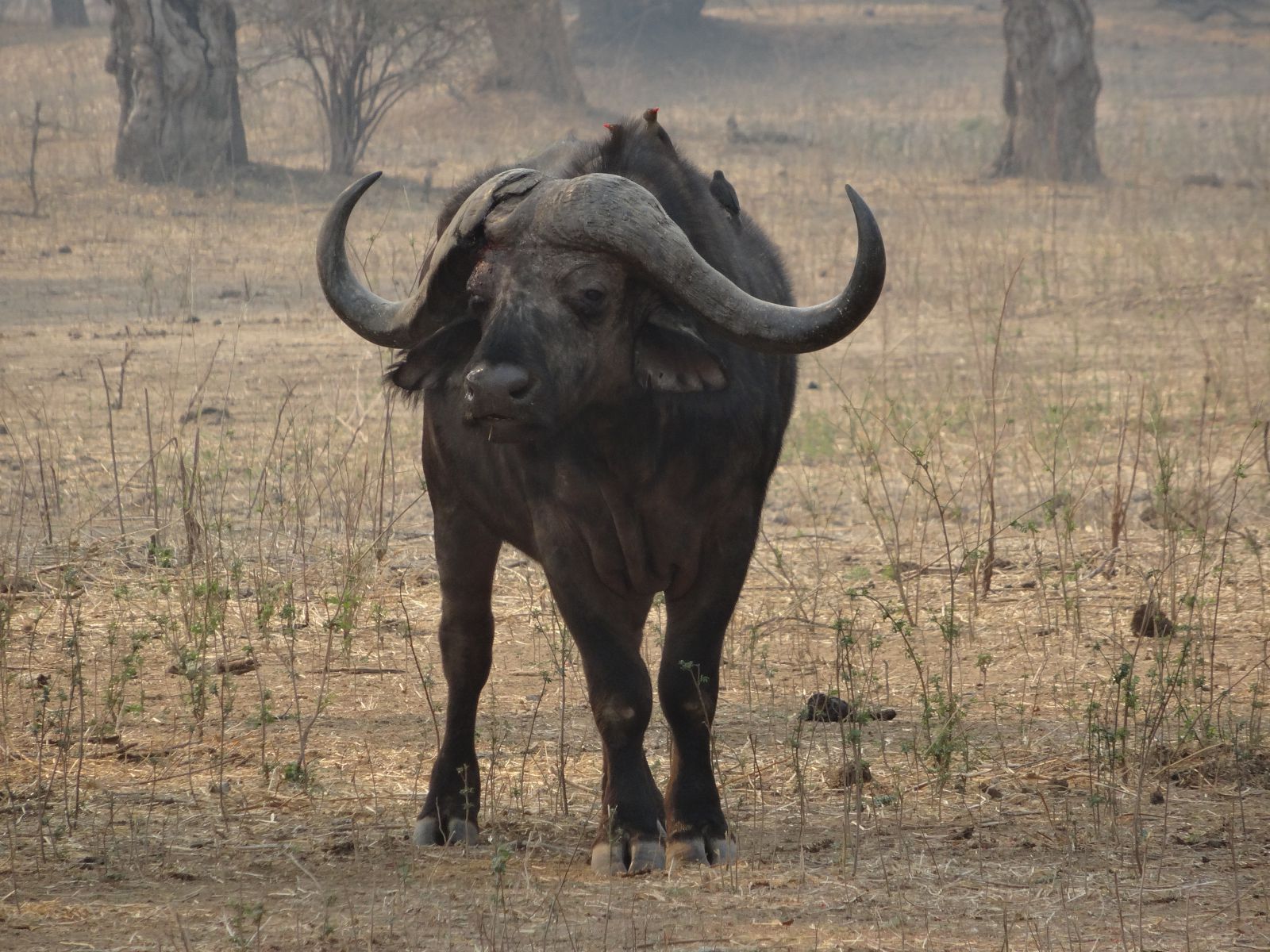 Habitat: Partial to mesic savannahs in Subsaharan Africa, it is also found from in dry bushlan, forested savannahs, miombo woodlands and even rainforests provided that water is present. Water is an essential requirement. Buffalos may even frequent dry areas provided that there is a permanent source of water. Buffalos are also found in mountain ranges such as the Kilimandjaro.

Food: Mostly a graze. Bufalos can sustain themselves with poor forage quality with little proteins. The feed mostly on the highest and coarsest grasses avoided by other grazers. This limits interspecific competition. By feeding on the highest grasses, shorter and more nutritious grasses become available to other herbivores such as gazelles and other selective grazers such as hartebeest. The African buffalo is what we call a bulk feeder like the the zebra. It is able to ingest large quantities of poor quality forage which compensates for its relatively low protein value.

During the dry season, buffalos can also browse if foliage is more nutritious than the grass available in the area.


Behavior: A usual gregarious species. There are three type of social structures.
The first one is the mixed herd composed of females, their young and adult males. There is a linear hierarchy among females based on age. Movements of the herd is decided by the female through some form of consensus descrubed as "voting" by Prins and Sinclair. It is a form of decision-making by the females of the herd where they regroup, hold their head at mid-height while seeming to face a given direction. They maintain this stance for a few minutes before browsing and eventually moving in the direction faced. The inclination angle of the head is a sign of the degree of consensus within the females involved. Females tend to stay within the same herd for the rest of their life. Herd of hundreds of individuals are more often than not aggregations of several herds which are unstable. Such aggregations form when feeding resources are in abundance in a given area. They are fusion-fission societies which form and break depending on environmental conditions similarly to what is found in giraffe herds.

Males switch between mixed herds and bachelor herds which is the second form of social structure and solitary lifestyle at the end of their life. Whether they are included in a mixed herd or a bachelor herd, males are not territorial. There is hierarchy among males based on age and size. Dominance is maintained through complex demonstration rituals. When another male approaches, the dominant male will make a lateral display, walking paralell to the intruding male with head held high to emphasize its size. The lower ranked male will reply with apeasement ritual where it will place its head below the belly of the dominant males. Mouth may be open. It will then retreat a with a few bounds and remain in alert posture (head raised, back arched, ready to flee) and eventually flee. If the males are of equal size they may then fight. Male fights are rare, short but violent. Subadult males often joust amicably.

At the end of their life, males may stay solitary which is the third form of social structure but may join other old males bachelor herds.

Reproduction: Females are sexually mature at around 5 years old and usually give birth to one calf. Twins are exceedingly rare. The gestion period varies from 330 to 346 days. Although females can reproduce all year long there is birth peak during the rainy season. Males test females urine through the "flehmen posture" to determine receptivity. They will rest their muzzle on the female's rump to prompt them to urinate and then test the urine with their tongue. When the female is in heat, the most dominant male will follow her closely to keep away other males. Less dominant male are displaced. If the female is receptive, the male will mount her.

Calf weigh between 30 to 50 kg at birth and weaned after 10 months in average depending on environmental conditions and interspecific competition. They are wholly dependent on their mother and the herd for protection as they are uncoordinated in the first weeks and find it difficult to follow the herd. The cow may hide them in dense vegetation until they are strong enough to follow. .

Predators: Lions are the main predators of adult buffalos which are by no means easy prey. Buffalos are extremely powerful animals et it is not rare that lions come out injured or die during these encounters. Besides, buffalos will not hesitate to come to the rescue of a captured buffalo by forming a wall of horns and then charge at the lions to scatter them. A single lion is exceptionally able to take down a buffalo but several lions are usually required to do so.