ROAN ANTELOPE
The roan antelope is of course another member of the hippotragini tribe like its close relative the sable antelope with which it shares the tragic history of decline. Formerly quite common throughout its range, it has almost disappeared from Eastern Africa except from Southern Tanzania and the most important populations are found in few localities scattered in Southern Africa. One distinguishes two subspecies which are very similar in appearance. The Southern roan antelope which discontinuous distribution goes from Northeastern South Africa to Ethiopia encompassing Zimbabwe, Zambia, Namibia, Angola, Malawi, Botswana, Rwanda, Uganda, Tanzania, Mozambique and Kenya. The second subspecies may be distinguished by its more vibrant coat with reddish hues. It is found in West Africa savannas straddling Senegal to Chad encompassing Mali, Burkina Faso, Benin, Central African Republic, Cameroon, Niger, Nigeria and Togo where it is the most dominant herbivore.


Close to the sable in apperance, it can be distinguished by its fawn coat, bigger size and height with much smaller curved horns. 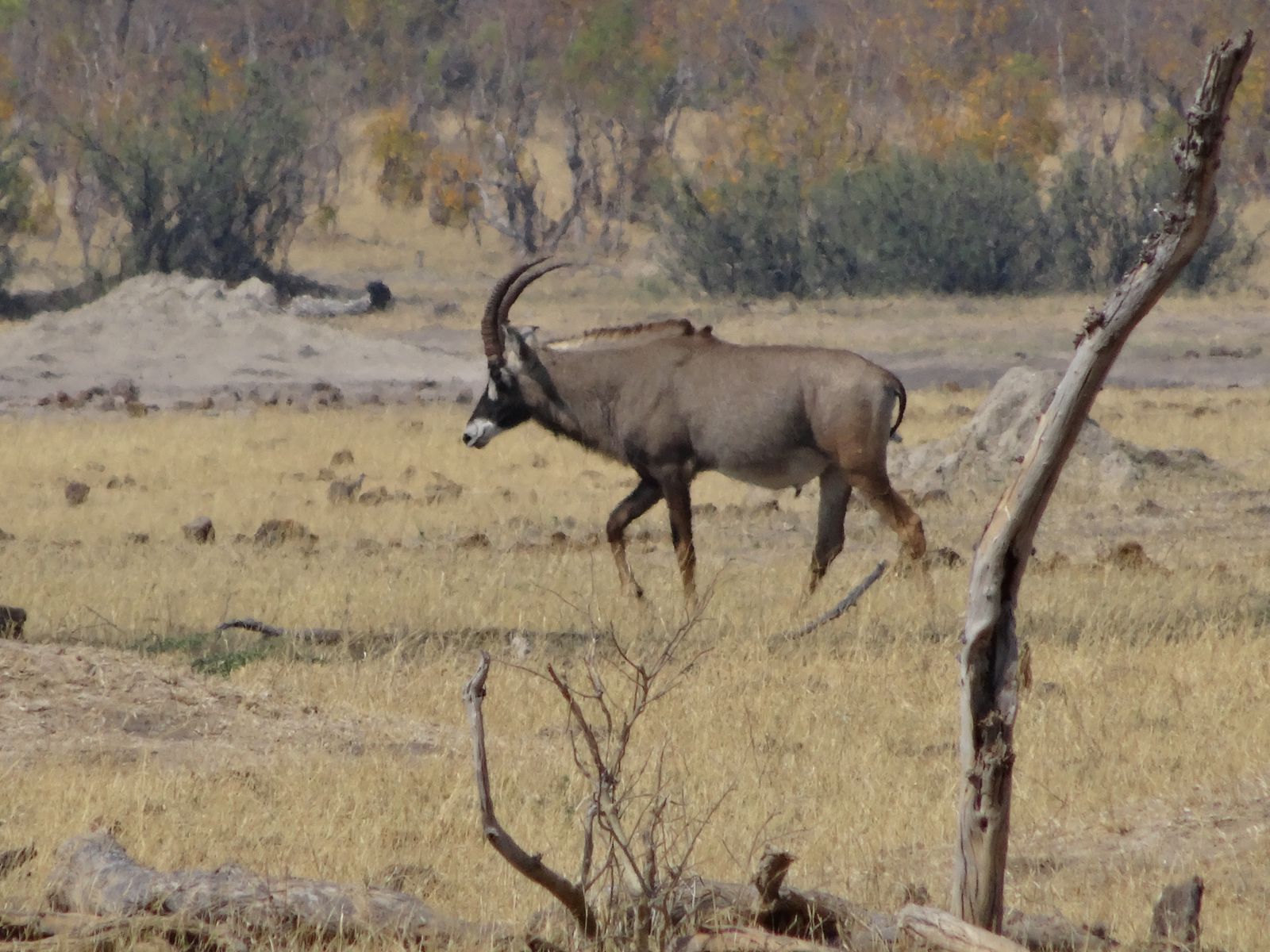 Food: The roan antelope is mostly a graze and browses ocasionally (5% according to Joubert) especially during the dry season. It has a selective diet as suggestion by its relatively narrow snout. They are partial to average height grasses between 5 to 30 cm tall (Chardonnet & Crosmary in Kingdon) with high nutritive value. They occasionally browse tree and shrub leaves. Inversely, in miombo forests they feed on woody plants with low nutritive value which is compensated by the lack of competition from other herbivores.  It feed on plants of greater height than the sable with preference for the higher part of the grass.

Roan suffers tremendously from competition from other large herbivores especially bulk feeders like zebras, wildebeests and buffalos which keep the grass at a very short height making it inaccessible to roans not to mention that they usually outnumber roans. This is why the roan population in the Kruger National Park almost went extinct due to overgrazing from the competiting bulk feeding herbivores. They thus avoid aggregations of bulk feeding herbivores. Roans depend on water and drink regularly. Like the sable it also visits salt licks frequently.

Behavior and social structure: The social structure of the roan seems more flexible than that of the sable especially as far as territoriality is concerned. Doubts are raised as to whether the roan is territorial or not. It seems that this depends on the locality. Roans are gregarious and sedentary. The basic social structure is that of the breeding herd composed of 4 to up to 20 females and young led by an dominant male. Temporary aggregations of over 100 may form when food is plentiful.

It seems does not defend resource-based territories in the usual sense but rather an area around female herd of which he is part. It seems to be particulary true when roans are in low density. If roans are in high density due to higher feeding resources, males may then form resource-based territories that they will delineate and defend by patrolling and mark through feces at regular intervals. They will also thrash vegetation with their horns which is both a visual and audible marker of territory.

Even when a male is attached to a breeding herd, the herd is led by a dominant female which decides movements and activities such as feeding bouts, drinking and movements. Male rarely interferes with the females decision although it may sometimes also decide the movements of the herd. The hierachy within the herd is determined by seniority, aside from the special status of the dominant male. The older females rule over the others and young regardless of gender. Herd members keep spatial distance between them. The herd, sendentary, roams an exclusive home range which may be as large as 120 km2. The is very active to deter other males to interact with the breeding herd and chase subadult males from the breeding herd when they reach three years old. Affirmation of dominance is the same as in most antelope species and include lateral display, erect and proud posture, mid or low horn presentation, horn shaking, horn sweeping on the rump of a subordinate animal. Roan antelopes have an appeasement ceremony when confronted by a dominant animal where they jump away with head held low when butted on the rump by a dominant individual.

Fights between roans are rare but violent. As with sables their fall on their front knees to fight and then engage in violent horn-clashing and sparring. Fights are more frequent in bachelor herds where young males joust to establish a hierarchy between themselves which may avoid future fights. Another occurence is when a young male will try to oust a dominant male from his breeding herd.

When a young male is chase from his breeding herd and is yet to establish a territory or take over a breeding herd of his own by displacing the alpha male, he joins bachelor herds which roam suboptimal feeding zones at the margins of breeding herds. Former dominant males which have been ousted from their breeding herd by a younger male may join bachelor herds too or remain solitary.

Roans are rather diurnal animals and will forage in the early morning until 9 where they will withdraw in cover during the hottest parts of the day to rest and chew the cud until late afternoon where they will forage again until dusk. They may have feeding bouts at night.

Reproductive behavior: It seems that roan antelopes reproduce perenially. The mating behavior is similar to that found in most antelope species. The dominant male will prance held high in erect and proud posture, make the lateral display. It will test the female's receptivity through flehmen followed by the laufschlag as a prelude to mating.

After a gestation lasting 9 to 9 months and half, the female isolates herself in vegetation to give birth. The calf remains hidden in vegetation for 6 weeks where the mother will visit him twice a day in the morning and late afternoon to enable him to suckle. This is a time of high vulnerability for the calf. It eventually  joins the herd and regroup with other calves under the surveillance of one adult female.

Predators: Like the sable, the roan is a formidable fighter which is seldom attacked by predators. This is good thing since their numbers are so low. Roans wlll not hesitate to stand their ground against predators and their flight distance is also one of the shortest of all antelopes. Reports mention a case where a group of roans stood their ground against two lions in ambush and eventually made them flee. Lions, spotted hyenas in group, packs of African wild dogs, and big Nile crocodiles are the adults main predators. According to Pienaar, leopards and cheetahs are occasional predators in the Kruger. There is one confirmed case of predation from cheetahs on fully grown adult roan bull (Spinage). Leopard may exceptionally take down adults but will most likely target subadults and calves.

Best places to see it:  The same as for sable. Kafue in Zambia is maybe the best park, with Chobe in Botswana, Hwange in Zimbabwe and to a lesser extent Ruaha and Mikumi in Tanzania and the Kruger in South Africa. As with sable, it is difficult to get closer than 30 metres, its flight distance in relation to vehicles is quite important. In my experience, Chobe in Botswana is one of the best place.