The African elephant is another member of the Big 5, and the biggest land animal on Earth and one of the most intelligent. It can live up to 60 years old. It is a fascinating animal to observe due to its extremely complex social structure. There used to a time where elephants were widespread all over Africa even in the Sahara and Northern Africa. Today, elephant is only present in Subsaharan Africa. Scattered populations remain in Western and Central Africa where they are on the verge of extinction. Some stable populations persist in Eastern Africa but poaching exerts significant pressure. Southern Africa populations are probably the only ones faring relatively well. 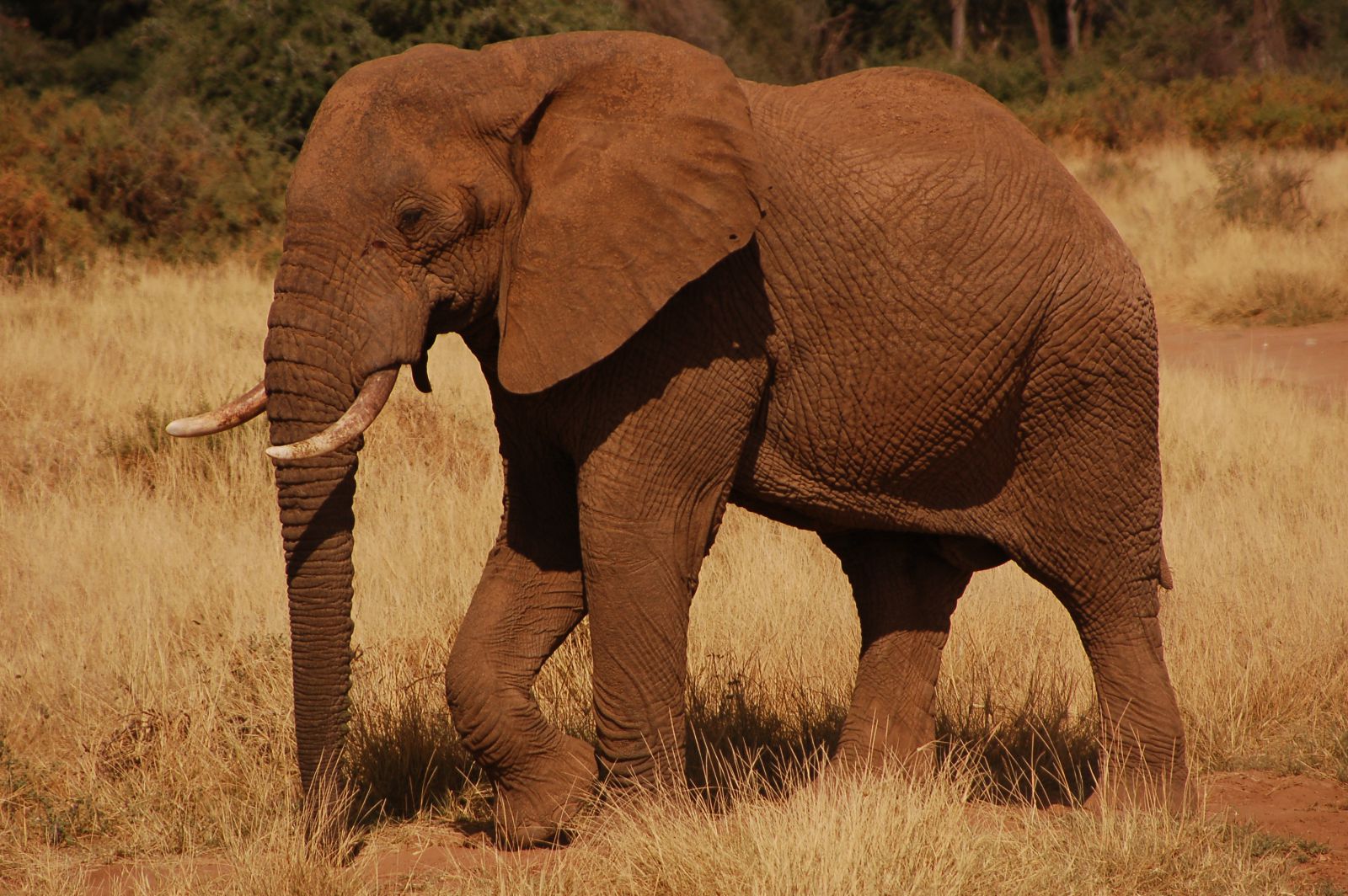 Habitat: Very adaptable, elephants can thrive in almost any habitat in Africa provided that there is enough water and food. It can be found from lowland rainforests to semi-deserts like in Namibia where elephants satisfy their water needs in mountain waters. Elephants are also present in all forest types in Africa : rainforests, montane forests, gallery-forests, wooded savannas, open woodlands. They are also partial to flood-plains, marshes and savannahs.

Food: The elephant's diet is the most diverse of all herbivores. 150 different species of vegetable matters may be consumed over a year. An elephant consumes 4 to 6% of his body weight daily (Estes) or at least 1 to 2% (Lindsay) which is 40 to 80 kg minimum of food. Consequently, they spend 60% of their time foraging. Elephants are mostly browsers. Their size, trunk enable them to size foliage up to 5m high which is as high as a bull giraffe can reach. In Mana Pools (Zimbabwe), bull elephants are notorious for rising on their hind legs to reach foliage high up in trees. They also feed on grasses especially during the rainy season and fall back on woody plants during the dry season like shrubs, forbs, and bark. Elephants, especially young ones, may fell down a tree to do so using their tusks and trump. They also feed on fruits and roots. Elephants try to feed on the most nutritious plants in great quantity as their digestive track is not the most efficient and only assimilates 44% of the food ingested. (Estes). Elephants are highly water dependent and need to drink 160l a day. Fingers are often pointed at elephants for their destructive impact on vegetation when they are too numerous. Yet, it is often forgotten that they contribute to regeneration of vegetation and soil fertilization through the seed spread through their feces.


Behavior and social structure: Elephant's society is matriarcal and sexes lead seggregated lives. The basic social structure is the herd composed of affiliated adult females with their subadult daughters and young of both sexes led by a matriarch who is the eldest and often biggest member of the herd. Herds may number between 2 to 25 individuals but average 10 individuals in most cases. Movements and activities of the herd are decided by the matriarch. The later is the memory of the herd who knows where waterholes and best pastures are located. When she dies, the herd is left disoriented for many days. When herds have too many members or when food is scarce, they may split. The new herd will have a new matriarch but they will keep close bonds with their former herd and will manifest their affection through a greeting ceremony which they won't indulge into if they meet a strange herd (Estes). During a greeting ceremony, the elephant with the lower social status inserts his trunk in the mouth of the dominant elephant. Other activities reinforce bonds between members of the herds such as bathing where the joy of the members of the herd may be felt. Mud baths are also enjoyed.

Males leave their natal herds around age 10 under the pressure of females which are less tolerant of their exuberant behavior. They wander alone but more often than not they join bachelor herds composed of males of all ages. These bachelor ehrds may have a dozen to over a hundred individuals. Bonds between males are not as strong as with females but relationships are amicable enough. It seems that there is hierarchy within bachelor herds based on seniority and size. Smaller and younger males will adopt a submission posture by lowering heads and withdrawing in presence of dominant males. They may also put their trunk in the dominant's animal mouth.  The dominant male hold his head high with trump hanging loose. He may touch the submissive individual's temporal gland with his trunk. When males of equivalent status meet, they size each other up and hold their heads high and approach one another until their tusks and base of the trunks touch. Thew assess the other's strength and attributes (size of the tusks, trunk and frame). The one who is able to hold his head the highest usually wins. These postures are also used in female herds.

Hierarchy between males is also determined when they join bachelor herds. Young males are quite belligerent and often spar amicably by pushing each other forehead against forehead, their trunks and tusks (once grown) entwined. More serious fights follow the same patterns except that both opponents try to make the other lose balance through violent twists and may even ram each other with the risk to gore the other with the tusks. Fights between mature males are rare but may be lethal and often caused by the presence of an estrus female. Fights may be more frequent and violent when males are in mutsch. The mutsch is a temporary state where the male has a surge of testosterone putting him in a state of high sexual tension which is noticeable by the dark secretions issued by its temporal glands, more than usual pungeant smell of its urine and caracteristic posture. During the mutsch, hierarchy between males is temporarily modified as male in mutsch regardless of his status is dominant over all other males due to his high-aggressivity. Males in mutsch usually isolate and wander alone until they meet a receptive female.

Elephants are not territorial and wander across home ranges which surface may vary from 50km2 to 12 000km2 depending on available feeding resources. The scarcer the feeding resources the bigger the home range. This is especially the case in dry areas such as in Namibia and in Sahel countries which still hold elephant populations. Communication between elephants plays an important role to maintain herd cohesion, to identify individuals and to coordinate movements of the herd. They use visual, olfactory, tactile and vocal means. Elephants are able to recongize each other's voice and coordinate their movements through the use of low frequency infrasounds why carry over several kms around and enable members to find ech other.

Elephant's social life is so rich that it is impossible to give a more detailed account here. The works of Cynthia Moss and Iain Douglas-Hamilton (among others) will provide much more details.

Reproduction: Elephants reproduce all year long but there is sometimes a birth peak in the middle of the rains when food is more plentiful. Females are relatively tolerant and let males approach when they want to test receptivity. In order to do so they will insert their trunk over the genital parts of the female and collect the secretions on their trunk and mouth it enabling the pheromones to hit their Jacobson organ. Feamles may be more wary, especially if they are in estrus (noticeable by their wide-opened eyes, head high) and will then avoid males. If the male is too persistent, she leaves the herd at fast pace, tail raised, head high. If the male insists and follows, it might turn into a chase which might last several hours. When the male eventually catches up, he rests his trunk on the cow's neck and head and eventually his chin and tusks on her rump as a prelude to mating. It seems that females have preference for experienced, older and bigger males which more often than not dominant males. They also stay with a male in mutsch as other males will give it a wide berth enabling the female to be free of their unwanted attention.

The gestation period is around 650 days which almost 22 months. The female gives birth in presence of the herd, standing with back legs slightly bent. The calf weighs around a 100 kg at birth and the mother and the rest of the herd help him get out of the foetal sac. The birth of a calf is joyful event which is welcomed with a lot of trumpeting and other shouts. He is subject to constant attention from the herd. The calf need his mother's milk during the first two years of his life. Males suckle more than females and mothers are more reluctant to answer the calls of their daughters. The bond between females and young is extremely strong and may last for 50 years. After one or two years, the calf bonds with other members of the herd who also help him to overcome obstacles in his path and protect him. Elephant calves are curious and playful.

Predators: Adult elephants are one of the rare animals in Africa which have no predators. A determined lion pride can attack calves and subadults up to 15 years of age. Savuti in Botswana is the only place in Africa where lions exceptionnally tackle adult elephants with more or less success (Dereck and Beverly Joubert). This may be explained by the departure of ungulates during the dry season which prompts lions to switch to elephants as prey in desperation. There is one cas on record of a successful attack on a bull elephant by lions (Melland) but his is an exceptional event. Spotted hyenas and leopards may prey on young and neonates (especially for the later).  When lions and spotted hyenas try to attack a calf, adults bunch up and make a close circle around it. There are several cases of unsuccessful attacks of Nile crocodiles on full grown elephants. There are even some YouTube videos of these spectacular events. In each case, the Nile crocodile sizes the trunk of the elephant which shakes the crocodile like a rag doll in return until it lets go. When confronted by lions, spotted hyenas or wild dogs, elephants react aggressively by trumpeting, ears spread, trunk raised and mock charge. This is enough to put any predator to flight.

Elephants are usually peaceful to other herbivores but may turn hostile during the dry season at waterholes. When they reach a waterhole, elephants scatter other animals by trumpeting. Rhinos, hippos, buffalos, lions, warthogs, one bull eland and even an oribi (Kingdon) have been killed at waterholes by elephants.Relationships with rhinos may be especially ridden with conflicts as the later are often displaced from waterholes. It is very rare for an elephant to kill another animal and more especially since it has an ambivalent understanding of death. Whether it is a member of the herd or another animal, elephants show clear signs of distress when confronted to the death of an animal. If it is a peer, elephants will remain close to the body, mourn it and touch it with their trunks and try to lift it as if to wake their fallen comrade. Mothers may stay close to their dead calves for days.

Best places to see it: Elephants can be seen in most parks and reserves in Africa. There are however some high spots like the Savuti and Chobe in Botswana, Amboseli in Kenya, the Selous in Tanzania, the Kruger and Addo in South Africa and Hwange in Zimbabwe. It is an animal which is easy to find and to observe.