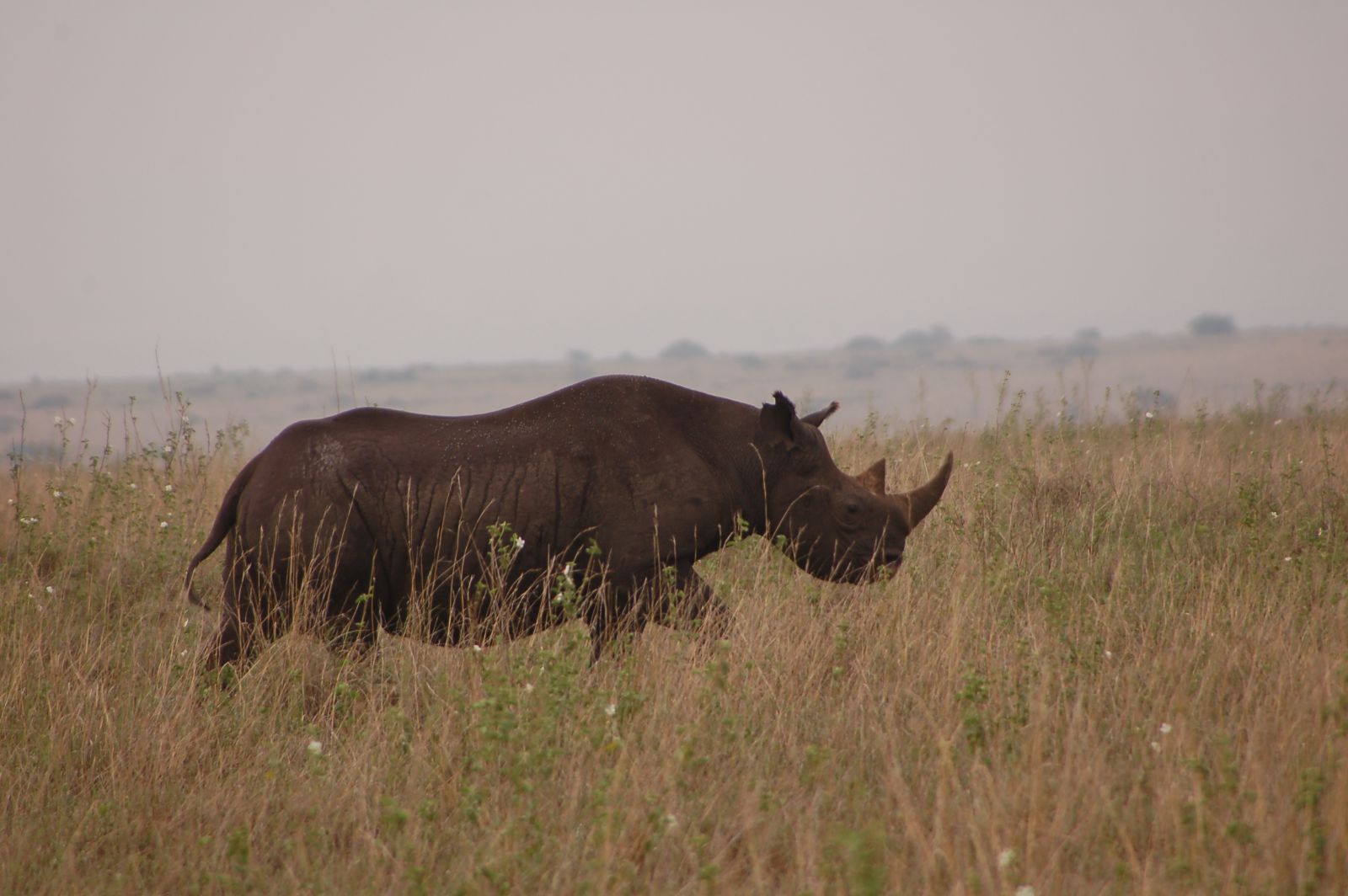 Habitat: The black rhino is more adaptable than the white rhino and may found in more diverse landscaptes from semi-deserts to forested habitats. Essential requirements are the presence of bush and woody plants on which it can feed and the presence of water. Black rhino seems partial to ecotones between bush and grassy savannahs. It may also be found in gallery-forests, mountane forests and wooded savannahs. It avoids dense forest and true deserts like the Sahara.

Food : The black rhino is a browser with a preference for woody species, leguminous and shrubs. More than 200 plants belonging to 50 different families have been recorded in its diet (Goddard, 1967). The black rhino also feeds on potentially toxic plants with high levels of tannin. The black rhino may nonetheless digest it thanks tannin inhibitors contained in its saliva. Its prehensil superior lip enable it to be quite selective in its diet. Its size enables it to feed up to 2m high. They also use their horn to take out bark from trees, break branches to feed on foliage and dig the ground in salt deposits. Black rhinos drink whenever they can since they are water-dependent and may walk great distances (8-25 kg) daily to satisfy their water needs. They may be able to go without water for 4 to 5 days if circumstances mandate it (Kingdon, 1979).

Behavior and social structure: The black rhino is slightly more solitary than the white rhino but nor is it asocial. Females are more sociable than males and it is not uncommon to find one adult female with subadults she had sired or not. Females live within home ranges which overlap and that they scent mark with urine sprays. Adult females may group temporarily. Meetings between adult rhinos aer amicable enough especially between females and even between males and females or two males around neutral ground such as a waterhole. Meetings may still be accompanied by mock charges, dominance postures between two males or male and female with lateral display from the male, snorting, shaking the head laterally. Sometimes two rhinos may get close to one another until their horns touch and engage in gentle horn-clashing and jousting until the two rhinos go back their own way.

Territoriality in black rhino is still debated. Black male rhinos seem territorial since they scent-mark the boundaries of their territory by urine spray and scatter dung by a backward kick from their hind paw. Subadult males and subordinate males are tolerated on the territory provided until they show signs of territoriality and challenge the territorial male prompting them to be chased away or even killed if they persist. Once chased, subadult males can associate with an adult female or remain on the fringes until they establish their own territory by ousting a territorial male. Territorial males have a solitary existence and will be eventually displaced by a younger and stronger male when they become too old to defend themselves. Male territories do not overlap. Conflicts between male rhinos often occur when another male trespasses on their territory. In this hypothesis, the territorial male get closer to the interlopper and issues a shrieking growl prompting the intruder to lower the head ready for combat. Generally, if the intruder will turn tail with the territorial male in close pursuit. More violent may occur with deliberate attempts to horn stab and gouge the opponent when males are of equivalent size and strength and one tries to disposess the other of his territory or if an estrus female is present. Territorial behavior may be subdued in more arid environments where black rhinos have to share waterholes.

Black rhinos are rather diurnal being most active at dawn, early morning and late afternoon where they forage. They rest during the hottes parts of the day being especially fond of mud bath in which they may roll.

Reproductive behavior: Black rhinos reproduce year long. When an estrus female enters a male's territory, the later gets closer with a siff-legged walk until his horn touches that of the female prompting the two rhinos to joust gently although the female may react more aggressively.Several mating attemps may unfold interspesed with feeding and walkling bouts before actual mating occurs (Estes).

The gestation period is 15 months and the female gives birth to a calf which weighs between 25 and 40kg at birth. The female is particularly aggressive during the first few weeks following birth and will chase her subadult calves which may 2 to 3 years of age at this time. Contrary to white rhino calves, the black rhino calf does not walk in front of his mother but rather follows her closely.

Predators: The adult black rhino although smaller than the white rhino is almost immune from predation. Adults may exceptionally fall prey to a determined pride of lions. A coalition of three male lions in Etosha National Park in Namibia killed three subadult rhinos.There is at least one case on record. There are rare instances where elephants, hippos and Nile crocodiles have killed black rhinos.

Aside from lions, subadult rhinos may fall prey to spotted hyenas. Calves may be preyed upon by lions, spotted hyenas and more rarely by leopards.

Best places to see it: The black rhino suffers from poaching because of its horn which is used in Chinese pharmacy for alleged aphrodisiac properties. The number of rhinos has plummeted dramatically over the years to such an extent that they have disappeared from certain countries such as Zambia. In Botswana, it may only be found in small numbers on Chief Island's in Botswana. In Southern Africa, they may be seen in Mana Pools in Zimbabwe but more specifically in Hluhluwe Umfolozi in South Africa where sightings are almost guaranteed.

In Eastern Africa, there a few santuaries, especially the Ngorongoro crater in Tanzania which has the highest density of rhino and the Nairobi National Park in Kenya. Nakuru also has a few but they may prove difficult to see. There are a few rhino in the Masai Mara in Kenya and in the Serengeti in Tanzania but they are especially hard to see because of their scarcity and the added difficulty to locate them in such a vast ecosystem.