The giraffe is the tallest land mammal. Eight subspecies are recognized which inhabit savannahs of sub-saharan Africa from Niger to South Africa surrounding the Congo Basin. 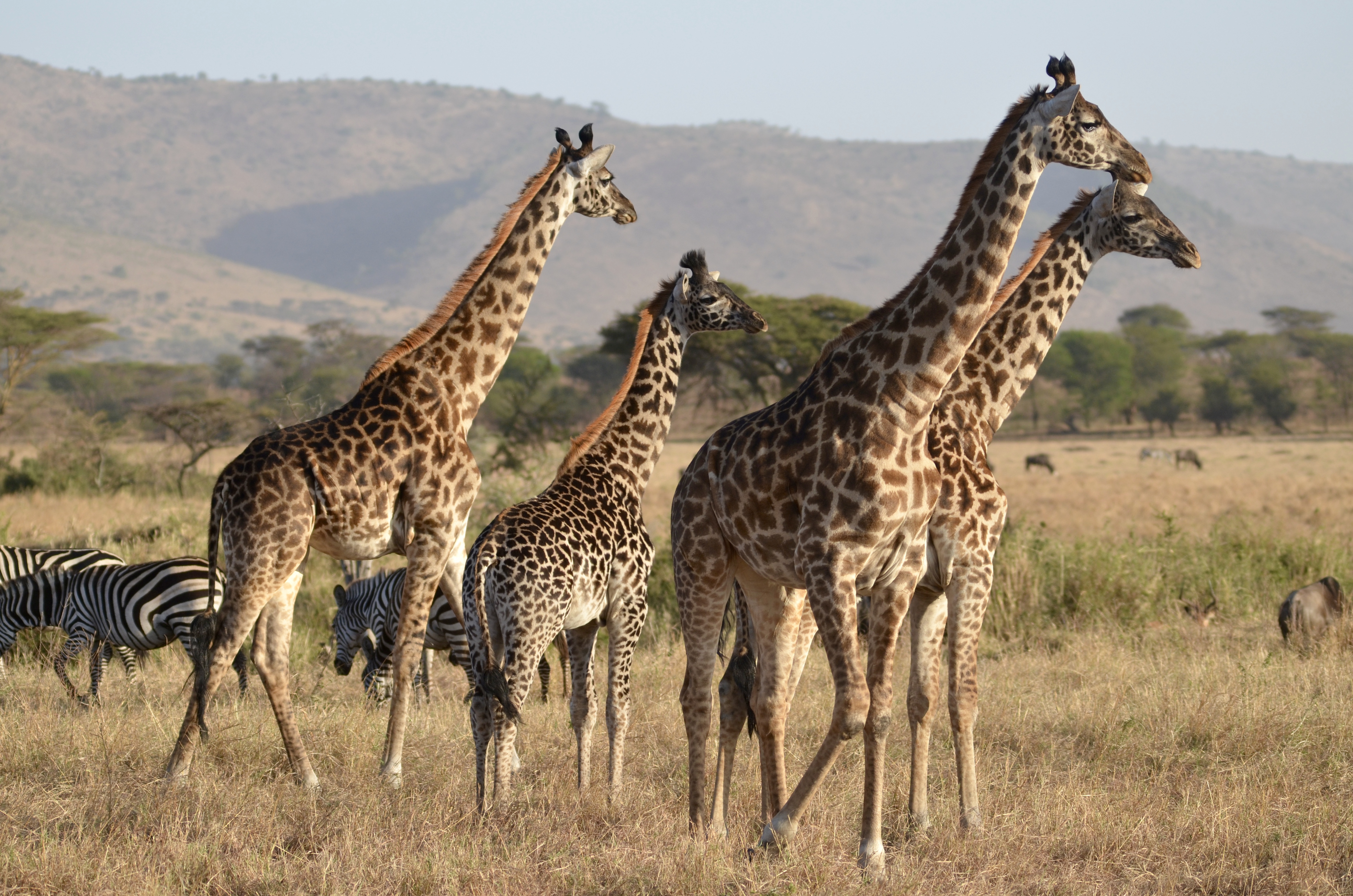 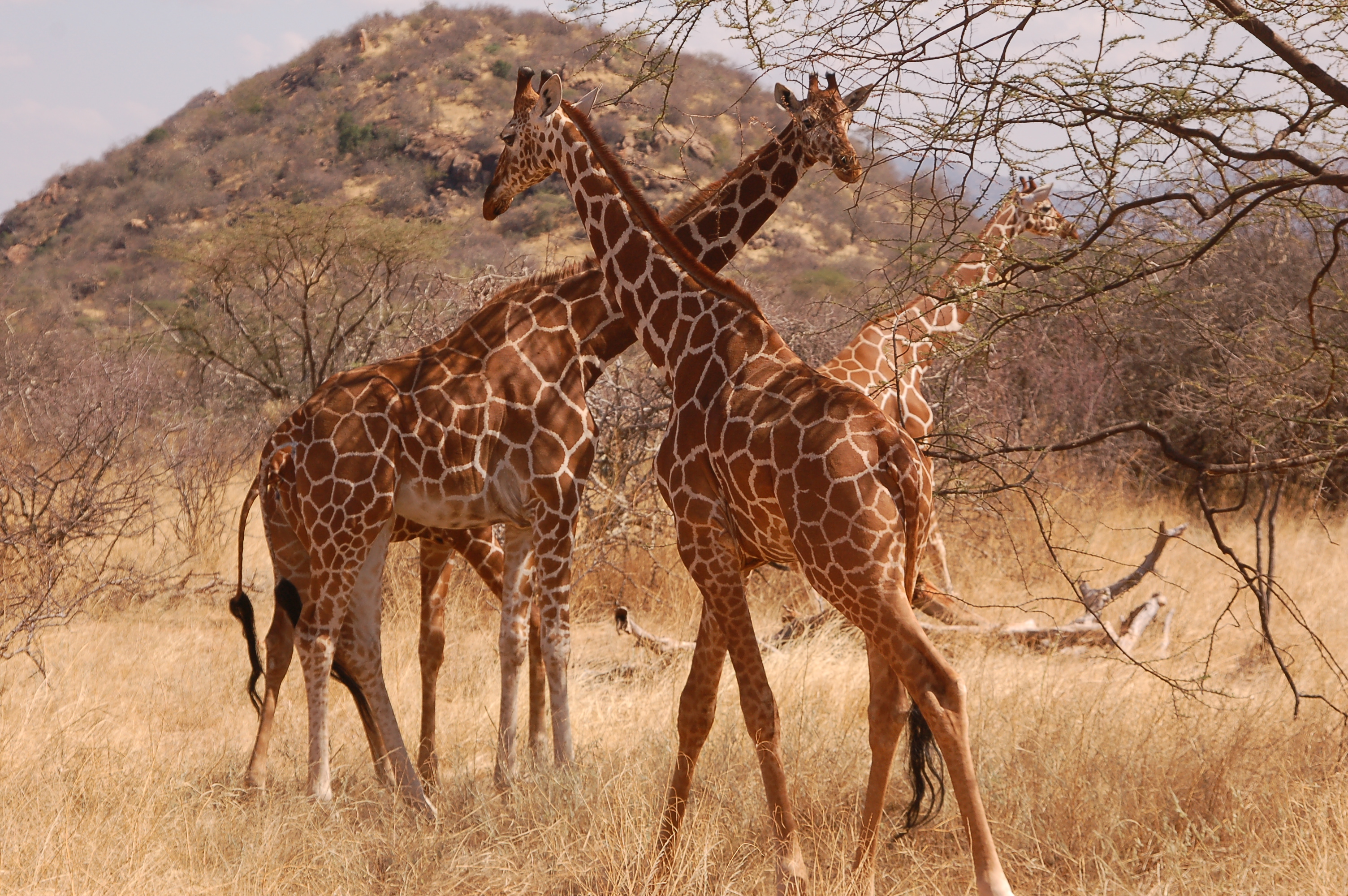 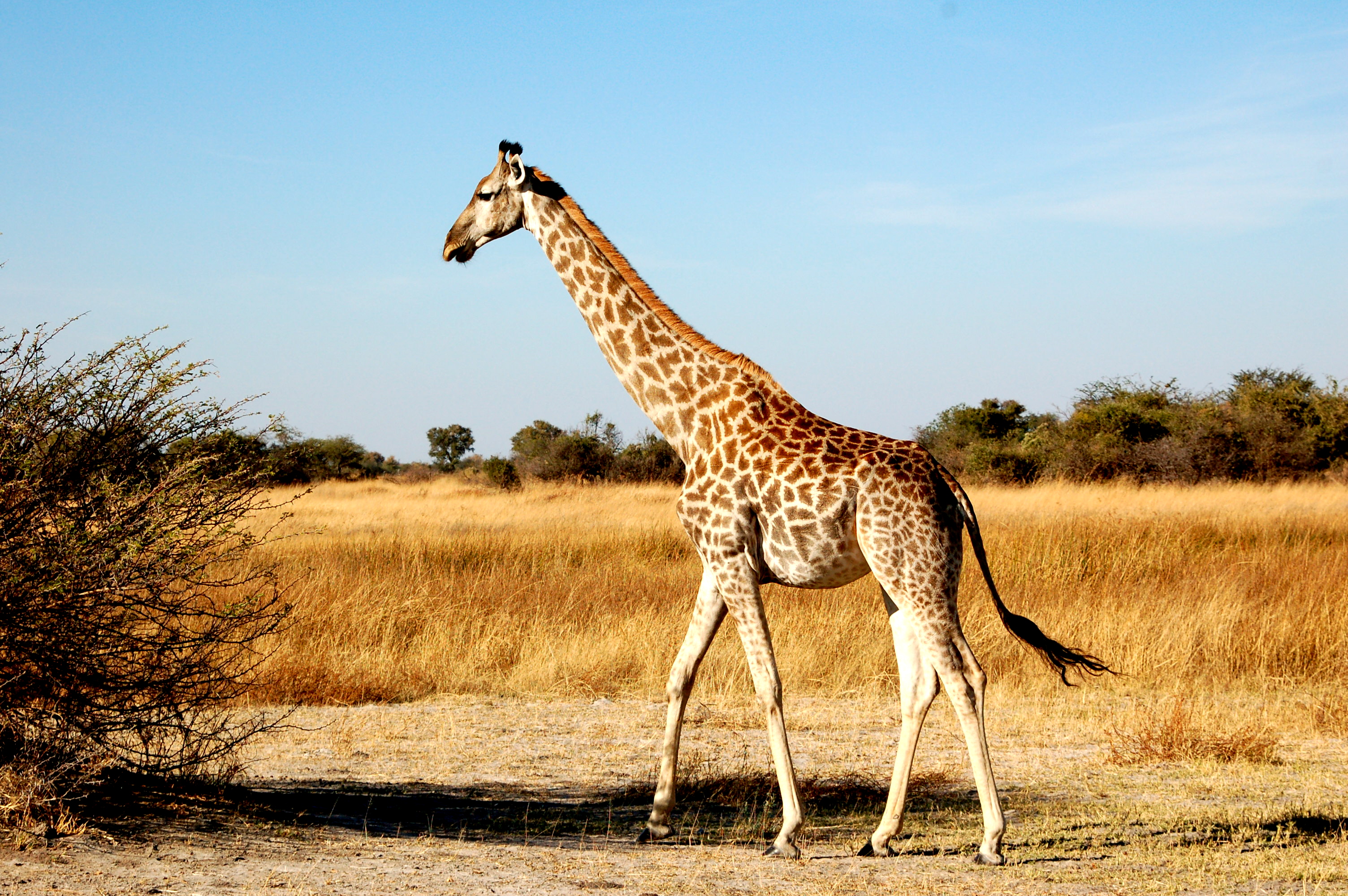 Habitat: Giraffes are generally partial to acacia savannahs and wooded savannahs but are very adaptable. They can be found also in miombo woodlands, open woodlands to semi-deserts such as the Kalahari or places as arid as Etosha or the Namib desert where they feed on vegetation growing along ephemeral rivercourses. It seems that they still prefer dry savannahs and other arid ecosystems rather than mesic savannahs thanks to several physiological adaptations like a cooling of blood vessels mecanism located in the snout to prevent the overheating of the brain and decrease waterloss. It seems that the blotches on their coat also play a thermoregulating role. They avoid dense forests where their close relative the okapi dwells and true deserts like the the Sahara.

Food: Essentially a browser. It fees on the leaves of trees, shrubs and bushes in a very selective way thanks to its prehensil lips and tongues. She feeds more particularly on young and tender leaves, buds and shoots. The giraffe is also very partial to twigs and especially those of acacia species which figure prominently in its diet. Yet, some acacia species have defense mechanism in the form of carnivorous ants (Crematogaster) which invade the giraffe's head prompting it to feed elsewhere. Some acacia species are also completely avoided due to their toxicity or unpalatibility. During the dry season, it may also feed on perennial leaves and vines (Leuthold & Leuthold). Giraffes may be destructive on tree species which do not have defense mechanism and may leave the tree lines without leaves. The size of the giraffe enable it to browse at heights of over 5m giving it a competitive advantage over other browsing herbivores. Only the elephant can reach similar height. Like the sable and roan antelopes, giraffes may lick bones to fulfill their calcium requirements.

Social structure and behavior: Giraffes' social structure is very flexible and is characterized as "fission-fusion" by zoologist Ann Dagg. Gregarious, giraffes welcome each other's company regardless of sex or age but there is no lasting bonds between them. Gatherings are always temporary (sometimes not more than few hours) and individuals join and leave freely. There is no formal leadership either in a herd. If there is segregation between sexes, it has more to do to dietary and habitat preferences with males preferring more dense and woody environments. Males sometimes regroup within bachelor herds especially when immature but tend to become solitary as they mature. There is a hierarchy among male giraffes based on seniority, size and neck girth. Hierarchy is based on the outcome of sparring matches occurring when males gather in bachelor herds. When a male wants to challenge another to rise in the hierarchy or if a female is contested by two males, a fight may ensue. Male giraffes fight by standing parallel to one another, legs slightly spread and swing their neck to use their head as a club to land blows on their opponent's flanks or neck. Fights may vary in intensity. Sometimes a few blows are enough for a victor to emerge. Fighting bouts are interspesed with several breaks enabling one of the males to break off the fight. When fights are more intense, head blows can really stun or even kill one of the opponents. There is a video where a male giraffe kills another with one well placed blow to the head of his opponent.  Hierarchy between males seeks to avoid resorting to fights. Generally immature males avoid dominant males. Fights only occur when one male tries to replace another in the hiearchy or when a female is sought after by two males of equivalent strength or status. Dominance is expressed by erect posture, held and neck held high, straight and vertical with chin raised. A male of inferior status shows submission by lowering the head, neck and ears and tucking the chin.

Giraffes are not territorial but evolve within home ranges the size of which varies depending on available feeding resources. There is no significant difference in size between home ranges of females and males which overlap significantly. In arid ecosystems like in the Tsavo in Kenya, home ranges can reach 160 km2 and up to 1500 km2 in Niger and Namibia where food is scarce.

Giraffes are rather diurnal and feed early in the morning after dawn and late afternoon until dusk. Females spend 72,4% of their time feeding while males spend 43,2% (Estes). The rest of the time is spent resting and chewing the cud in the hottest hours of the day and at night. Giraffes lie down at night to rest and chez the cud.

Reproduction: Giraffes reproduce all year long with a recurring birth peak during the rainy season. Mating behavior is very similar to bovini. When a male has identified a female in oestrus, it follows her, licks her tail or seizes it in his mouth. It can also rest his head on her rump. It will test her urine through flehmen (lip curl enabling the pheromones contained in the urine to reach the Jacobson's organ located in the mouth) to determine her receptivity. It then proceeds with the laufschlag (lunge of the front leg between the female's giraffe hind legs) as a prelude to mating. The male raises on his hind legs with his front legs lying gently on each side of the female's flanks.

The female isolates to give birth. It stands to do so and the calf falls from a height of 2m. It weights around 100 kg at birth. It remains hidden in vegetation for several weeks before joining the herd and nurseries where he bonds with other calves which are generally very playful. During the first few weeks, the mother giraffe remains in attendance and will confront and defend her calf against any predator including lions. The bond between the calf and the mother lasts between 14 to 22 months (Pratt & Anderson; Estes). Nurseries are also under the surveillance of at least one adult giraffe.

Predators: Lions are the sole predators able to bring down an adult giraffe. Giraffes are powerful foes which kicks can break a lion's skull. There are cases on records where adult giraffes killed lions. Leopards, spotted hyenas, packs of wild dogs and the very occasional cheetah take on calves.

Best places to see it:

- Masai giraffe can be seen in most established parks and reserves of Kenya and Tanzania except the Ngorongoro (Tanzania).
- Reticulated giraffe is found mainly in Samburu (Kenya).
- Rothschild giraffe are found in Nakuru (Kenya) and in Murchison Falls (Uganda).

Giraffes are easy to see even outside parks and are often found along roads.