The wildebeest is an emblematic species of the African savannahs of Eastern and Southern Africa. Contrary to what appearances may suggest, the wildebeest is an antelope from the Alcelaphini Tribe like the topi and the hartebeest. It is a big and powerful antelope with a bovine demeanor. Four subspecies can be distinguished. The biggest is the blue wildebeest (Connochaetes taurinus) with a dark greyish coat widespread in Southern Africa from North-Eastern South Africa up to Zambia including Botswana, Zimbabwe, Namibia, Mozambique and Angola. The Johnston's wildebeest (Connochaetes johnstoni) has a lighter coat and may be distinguished by a white stripe barring its snount transversally. It has a limited range spanning northern Mozambique, Eastern Zambia and Southern Tanzania, especially in the Selous Game Reserve. The Western white-bearded wildebeest (Connochaetes mearnsi) is probably the most well-known subspecies featuring regularly on documentary shows in TV. It is present in the Mara-Serengeti ecosystem spanning Kenya and Tanzania where it migrates seasonally and annually which is one of the most impressive natural shows on Earth. It is the smallest subspecies with the darkest coat with bluish shades and the emponymous wide beard. It has to be distinguished from the Eastern white-beared wildebeest (Connochaetes albojubatus) with the lightest coat of all subspecies found in North-eastern Tanzania and South-eastern Kenya. Knowledge on wildebeest's ecology owes a lot to the research of Richard Despard Estes. 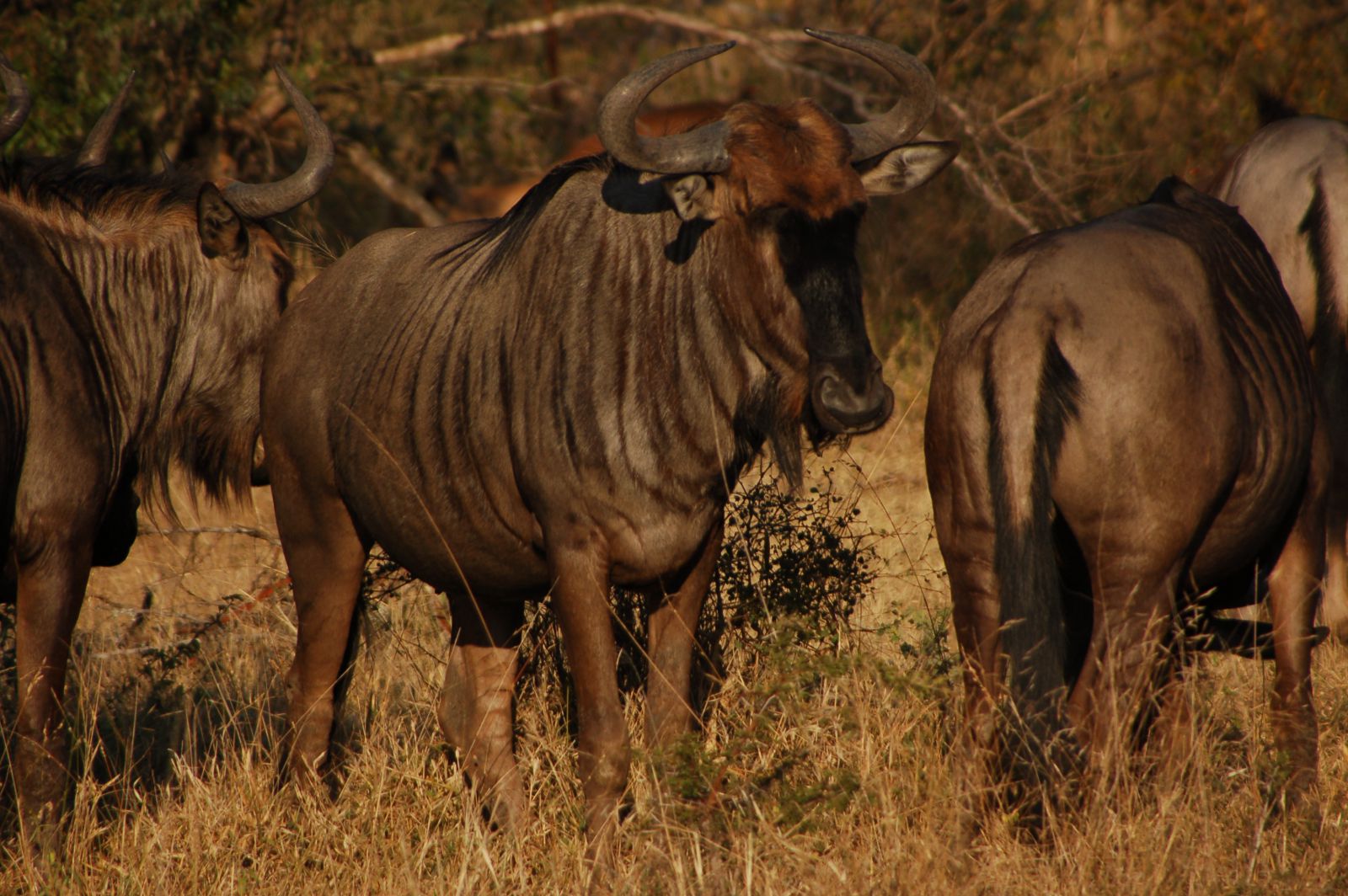 Habitat:  Wildebeeests are partial to open habitats and especially grasslands, acacia savannahs, short-grass plains and lightly wooded savannahs. They never stray away from more than 20 km of a waterhole.

Food: A strict grazer or hypergrazer. Its wide snout, dental formula and prehensile lips tend to demonstrate that the wildebeest is a crop-grazer able to crop large quantities of short grasses in one bite. It feeds mostly on highly nutritious species of short grasses. This explains why they migrate and follow the rain which will provide them with green and fresh grasses that they relish.

Behavior and social structure: The wildebeest is a highly gregarious and territorial species. Territorial behavior may be found both in sedentary and migratory herds.

Sedentary herds follow the usual social structure found in other antelopes. They are composed of nursery herds of affiliated females and youngs which may number as much as 25 or 30. Bonds between females are strong, especially the mother-daugher bond, and strange females are usually met with hostility.  Each breeding herd overlap the territories of several males. Mature males establish territoties often after ousting a territorial male after a fight. Territories are relatively small and territorial males are thus quite close from one another. They maintain the status quo between them through sophisticated territorial rituals like the mutual urine testing which is highly unusual behavior among antelopes. More conventionally they will scrap and horn the ground, defecate and roll on the ground. In typical topi or hartebeest fashion (the wildebeest close relatives), the male will stand in erect posture conspicuously in the middle of its territory, if possible on a termite mound or any other salient point of its territory. Estes describes 30 different territorial behaviors among which the swishing of the tail and horn-speeping. When faced by an intruder, the territorial male will come to him in a rocking canter. If the intruder stands his ground, the territorial male will leap aside and make a lateral display. Sometimes confrontation may degenerate into a fight where the two wildebeests will drop on their knees and lock horns and push one another through front-pressing. During the rut, they may ignore territorial ritual and ram any male showing interest in an oestrous female. Most fights occur during the rutting period or in the framework of territorial disputes. Before establishing territories, young males dwell in bachelor herds at the margin of territorial networks. Females may also express dominance by rubbing their head against the rump of a female of lesser status. Males do the same.

Territorial behavior is also found in migratory herds except in a more ephemeral fashion. Migratory herds are temporary fluid aggregations of females and young accompanied by mature males. When the herd is on the move, females and males mix together. As soon as the herd stops, males establish small ephemeral territories in a bid to retain passing oestrous females. When the herd departs, the territories disappear. They will also take the lead when the herd is faced by an obstacle such as a river or dense vegetation.

Wildebeests migrate to follow the rains which are synonymous with greener pastures with green and tender short-grasses. In the Mara-Serengeti ecosystem, wildebeests stay in the Ngorongoro and southern Serengeti from November to April which is the rainy season. In April-May, the migration begins towards Kenya going through the Western corridor and across the Grumeti river and its killer crocs which claim a high toll. In June/July they reach the Mara river which is a most significant obstacles with its steep river banks, strong currents and lurking crocodiles among the biggest in Africa. Wildebeest dies in thousands also because of they crush one another by trying to climb the banks or by drowning. From July to October, the wildebeests, stay in the Masai Mara in Kenya before going back to the Serengeti in October. Wildebeests migration of lesser scale are also present in Southern Africa as they are inhibited by veterinary fences raised by farmers. Migration still occurs and may be observed in Botswana in the Mgkadikadi Pan.

Wildebeest spend more than half their time resting and chewing the cud and a thid of the time foraging. The rest of the time is spent in social interactions. Wildebeests can be active day and night and can even feed when the moon is full.

Reproductive behavior: Wildebeest may reproduce all year long but the the rut is usually synchronized with the end of the rainy season and the beginning of the migration. It is a period of intense competition between males as they are in close presence to one another due to the small size of their territories. Each male will attempt to hold as much females as possible on their territory and will not hesitate to confront other territorial males in a rocking canter and engage in either fighting and chasing them around. Competition between males is so intense that they neither feed nor rest during the whole period leaving them completely spent.

The mating ritual is somehow similar to that of other antelopes with some behaviors specific to the wildebeest. An oestrous female may be recognized by holding its tail on the side. Male follows the female in the head-low posture until she urinates. The male will  test the urine by curling the lips to enable the pheromones within the female's urine to reach the Jacobson's organ in its mouth enabling it to determine the female's receptivity to mate (flehmen). He will then try to mount her. If the female does not hold still or refuses to be mounted, the male may raise on its hind legs to display his penis in full erection. This behavior is unique to the wildebeest.

The birth period is also synchronized like the oestrous periods for females. They are programmed to begin two months before the onset of the rains which are period of food abundance. It lasts three months. Synchronisation of births seek to ensure the highest survival of calves in the face of heavy predation. Calves are so numerous that their sheer number will soften whatever impact the predators may have especially since calves are very conspicurous in the open habitats favored by wildebeests. Wildebeests populations are limited by food-availability rather than predator control.

Predators: Lions and spotted hyenas are adults wildebeests main and most usual predators. Packs of wild dogs and coalitions of male cheetahs may also take a toll. Solitary cheetahs and leopards are occasional predators. Although fully capable to take down adult wildebeests single-handedly especially leopards, it is not without risk of injury for a solitary hunter. Thus a single cheetah or a leopard will usually tackle subadults and calves which are easier and more manageable to take down. Wildebeests are not as defenseless as wildlife documentaries portray them. Although powerless against a single lion, they may stand their ground against a lone hyena, a cheetah and even a leopard. Similarly, cows will defend their young against all odd even when confronted by a whole pack of spotted hyenas or wild dogs even if in most cases her efforts will prove futile. She is usually successful in defending her calf against a lone hyena, cheetah or leopard. Nile crocodiles are also important predators of adult wildebeests. Calves are preyed upon by all big cats, hyenas and even jackals.

Best places to see it: The savannahs of East Africa are the best places to observe wildebeests especially during the migration in the Serengeti/Ngorongoro (Tanzania) and the Masai Mara (Kenya). Wildebeests population are not as dense in Southern Africa and they are usually found in smaller groups in most game reserves in the subregion.