The nyala is magnificent antelope which is a member of the tragelaphini (bush antelopes with spiraled horns). It's got an intermediary size between the bushbuck and the greater kudu, and looks like a mix of the two. Sexual dimorphism is significant in nyala. Indeed, the male is more than twice the size of the female with a dark fur with white stripes on the flanks. It bears a dewlap and magnificent lyrate horns whereas the female is hornless. The female has tawny/orange coat with more pronouced white longitudinal stripes on the flanks. The nyala has a limited range centered around the Limpopo basin between the north of South Africa, southern Mozambique and southern Zimbabwe. 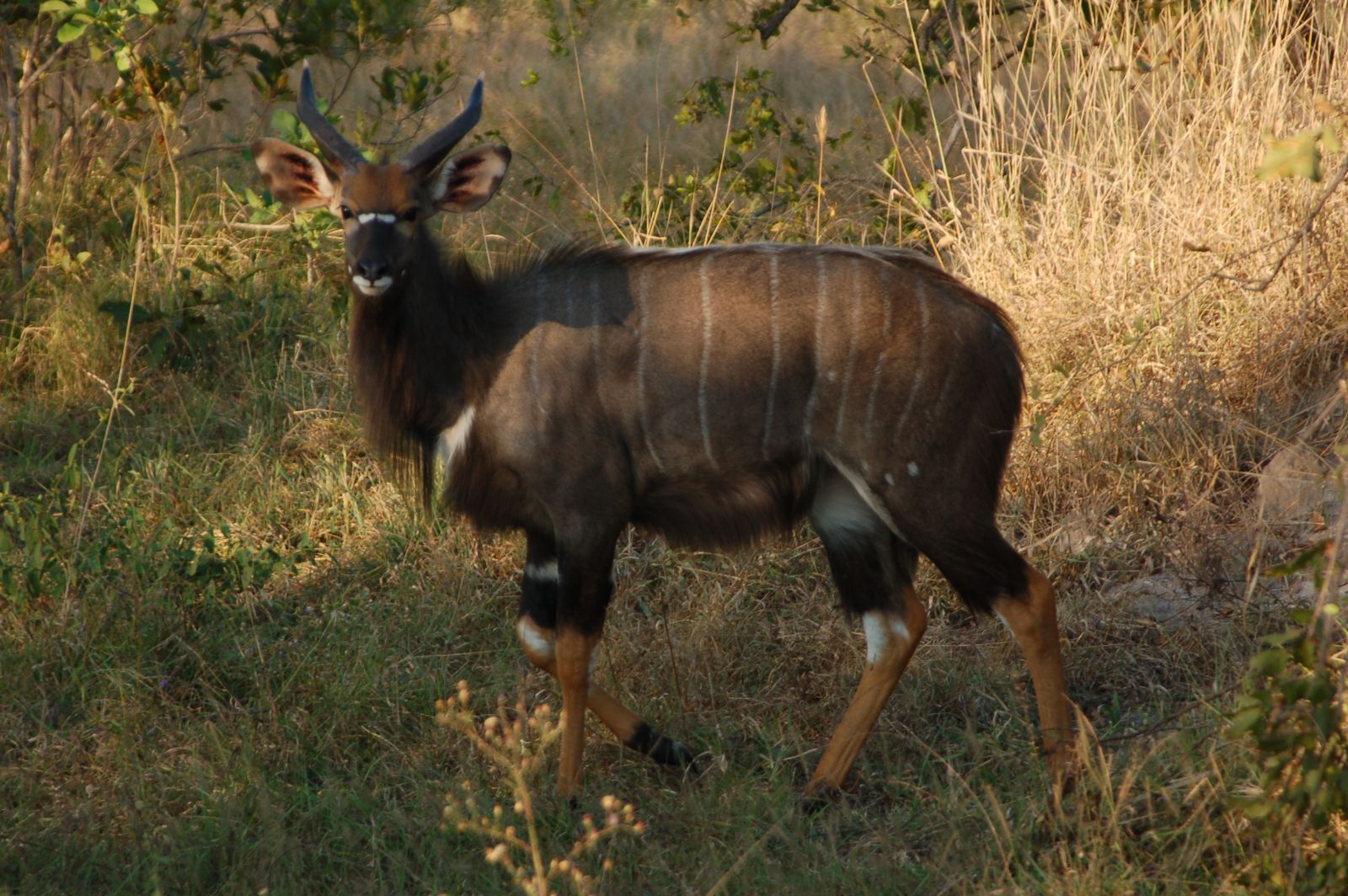 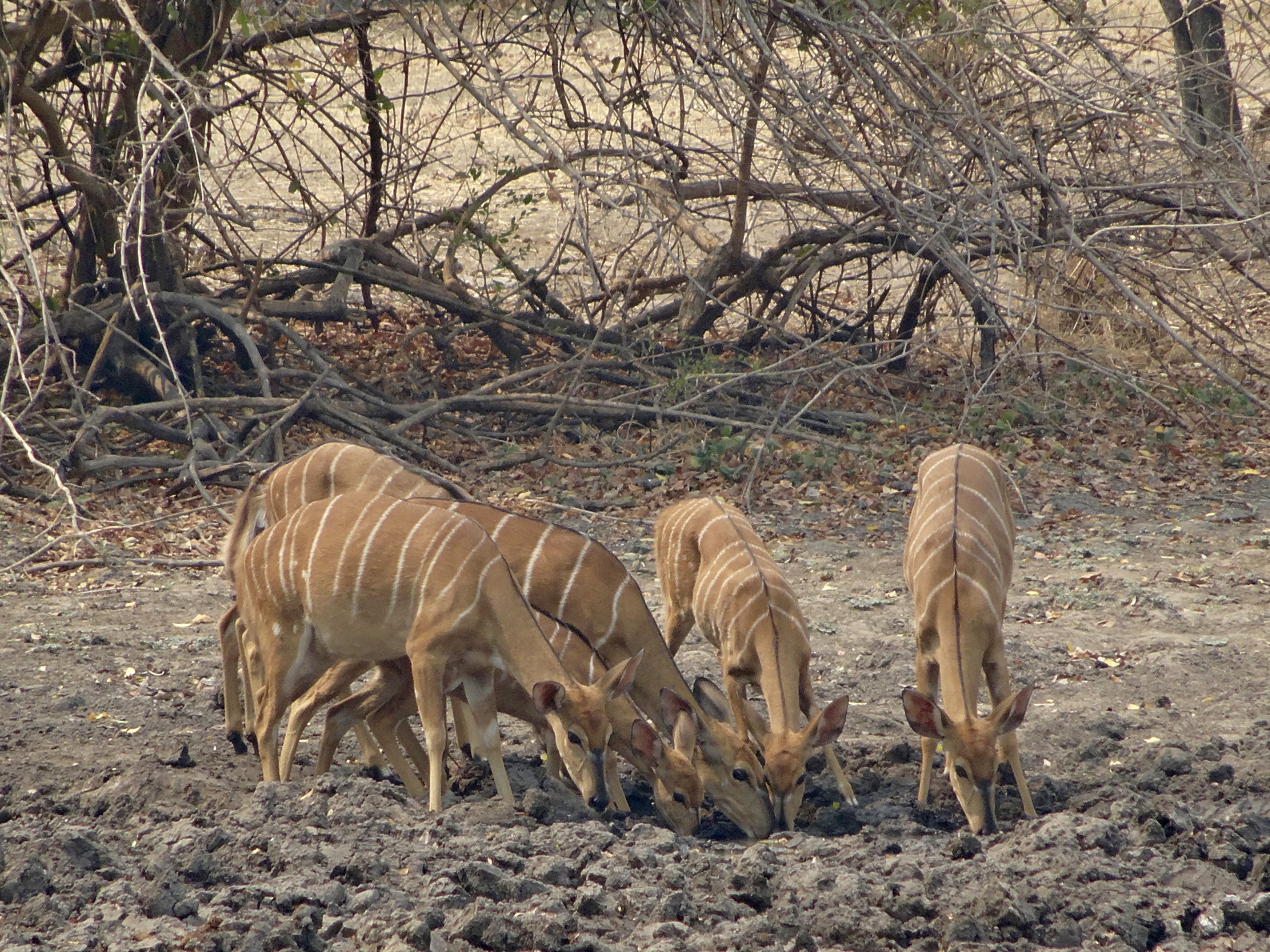 Habitat: Nyala is partial to dense habitat. It thrives in dense thickets, forests, reverine forests, woodlands and wooded savannahs. It may be found also in hilly country with appropriate cover and in ecotones between woodlands and grasslands at night.

Food: An intermediate feeder. Nyala either grazes or browses depending of the season. It is more likely to browse during the dry season where it feed on various browse plants and fruits. More than 108 of browse plants have been recorded in its diet (Tello & Gelder). During the rainy season, it feeds more readily on several green grass species and forbs and may venture in the open to look for them.

Behavior: The basic social structure si that of the female herd and their young of various ages. The herd is composed of 5/6 related females and their young. Young males leave the herd after a year and a half and associate with other young males of the same age for very short spans of time. As they mature, they tend to more and more solitary.

Nyalas are not territorial and males usually tolerate each other despite their solitary habits. Conflict may arise in presence of an oestrous female. However, most fights can be avoided due to various rituals and postures. When confronted by a rival a male will assert its dominance by a lateral display, head tucked, arched back with erected dorsal ridge and tail curved over the back. This enables the male to emphasize its size, power and dewlap.
Dominant male may also adopt the stiff-legged walk or horn vegetation nearby. These rituals are usually sufficient to prompt the weaker male to move away. Real fights are rare and consist of clash and push with horns. Young males are more likely to spar.

Nyalas move within overlaping home ranges. They are active at dawn and dusk and rest during the hottest hours of the day between 10 am and 2 pm.

Reproduction: Nyalas reproduce all year long with two peaks in autumn and spring. Gestatoin period is 7 months. Males test females' receptivity by pressing their nose and smelling the base of the tail which then promts flehmen (opening of the mouth with lips curled to enable the male to test females' pheromones through their Jacobson organ in their mouth). If the female is receptive, the male will follow her by resting his head on her rump while the female keeps walking and urinating every so often prompting the male to tes the urine. When ready, she stops walking to enable the male to mount.

Females isolate to give birth. Immediately after birth, they eat the placenta and lick the young to remove all odors and traces which could attract predators. The young remains hidden in dense vegetation for the two first weeks (10-18 days) until it is strong enough to follow his mother.

Predators: Nyalas are preyed upon by all the major predators of the African savannah. Leopard may take the higher toll considering the fact that they are partial to the same habitats as nyalas. Spotted hyenas, African wild dogs, and lions are also important predators. Cheetahs also take down full grown nyalas. In Phinda, South Africa, coalitions of male cheetahs acquired quite a reputation for tacking down full-grown bull nyalas. Nile crocodiles are a constant threat to adult nyalas when they come down to drink. Females and youngs may also fall prey to rock pythons. Baboons, caracals, jackals, honey badgers, great raptors may also prey on young nyalas.

Best places to see it: Nyalas are common and are easily spotted in Sabi Sand, Kruger, and Hluhluwe-Umfolozi in South Africa. There is also a small nyala population in Mana Pools, Zimbabwe.