The Ethiopian wolf is middle-sized canine slightly bigger than a jackal but not as big as an African wild dog. It is the rarest canid in Africa endemic to the Ethiopian highlands where only a few hundred individuals subsist. 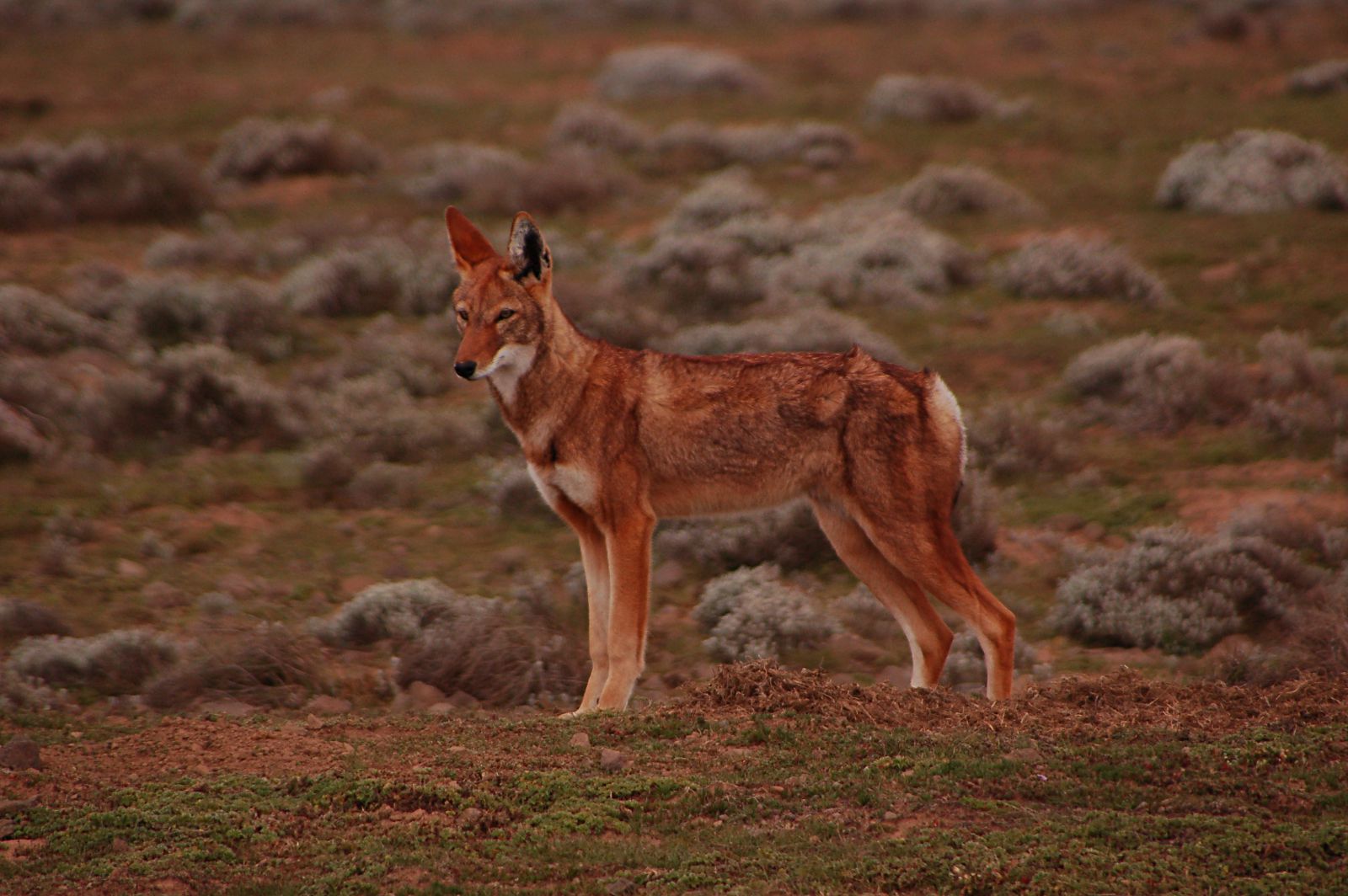 Habitat: The Ethiopian wolf inhabits Afro-alpine grasslands of the Ethiopian highlands above the treeline from 3200 m high onwards. He is partial to open habitat with low vegetation cover such as short grasses and a few shrubs.

More occasional preys include the fawns of antelope species such as common duiker, mountain nyala and Bohor reedbuck. It may also feed on eggs and scavenge.

Ethiopian wolves forage singly. When a prey is spotted, they creep on it belly to the ground before seizing it in their jaws after a short rush. Sometimes they may pursue rodents over longer distances.

Behaviour and social structure: Ethiopian wolves despite the fact that they hunt singly are actually part of a pack which may number between 3 to 20 individuals. Packs are territorial and defend their territory against trespassing packs. These territories are relatively small, less than 10 km2 in average and confrontations with competing packs are thus frequent. It is in defence of their territory that social behaviour can often be observed as members of the pack will scent-mark the territory and engage in social greetings rituals. These greetings rituals are similar to those found in other canid species and involve licking the partner's face. Ethiopian wolves also have a rich repertoire of vocalizations to communicate between themselves. The howl deserves special mention as it is used to communicate with distant pack members.

There is a strict hierarchy between each gender of a pack. This hierarchy is maintained through various dominance and submission postures.

Gestation lasts for 60 days in average. The female gives birth up to five pups. She gives birth below a rock, a crevice or even in the open. The pups emerge from the den after three weeks following birth. They are often displaced by the mother from one den to the other. Contrary to what happens with female African wild dogs, allomothering is tolerated. Pups are weaned after ten weeks. They join the pack on their patrols after six months and reach adult size after two years.

Predators: There are few other predators in the Afro-alpine grasslands where the Ethiopian wolves dwell. Great raptors such as the tawny eagle are a major threat to pups who are actively defended by the adults. Leopards which usually roam the lower elevations may be an occasional threat.

Best places to see it: The Bale mountains and especially the Saneti plateau offer by far the best opportunities well ahead of the Simien mountains where sightings are much more random.