Lechwes belong to the reduncini family just like the waterbuck. It is a middle-sized antelope which vaguely looks like an impala but taller and bigger. It is a semi-aquatic antelope which bears long and pointy hooves which are adapted to life in the swamps. It is the most aquatic of all antelopes after the sitatunga. 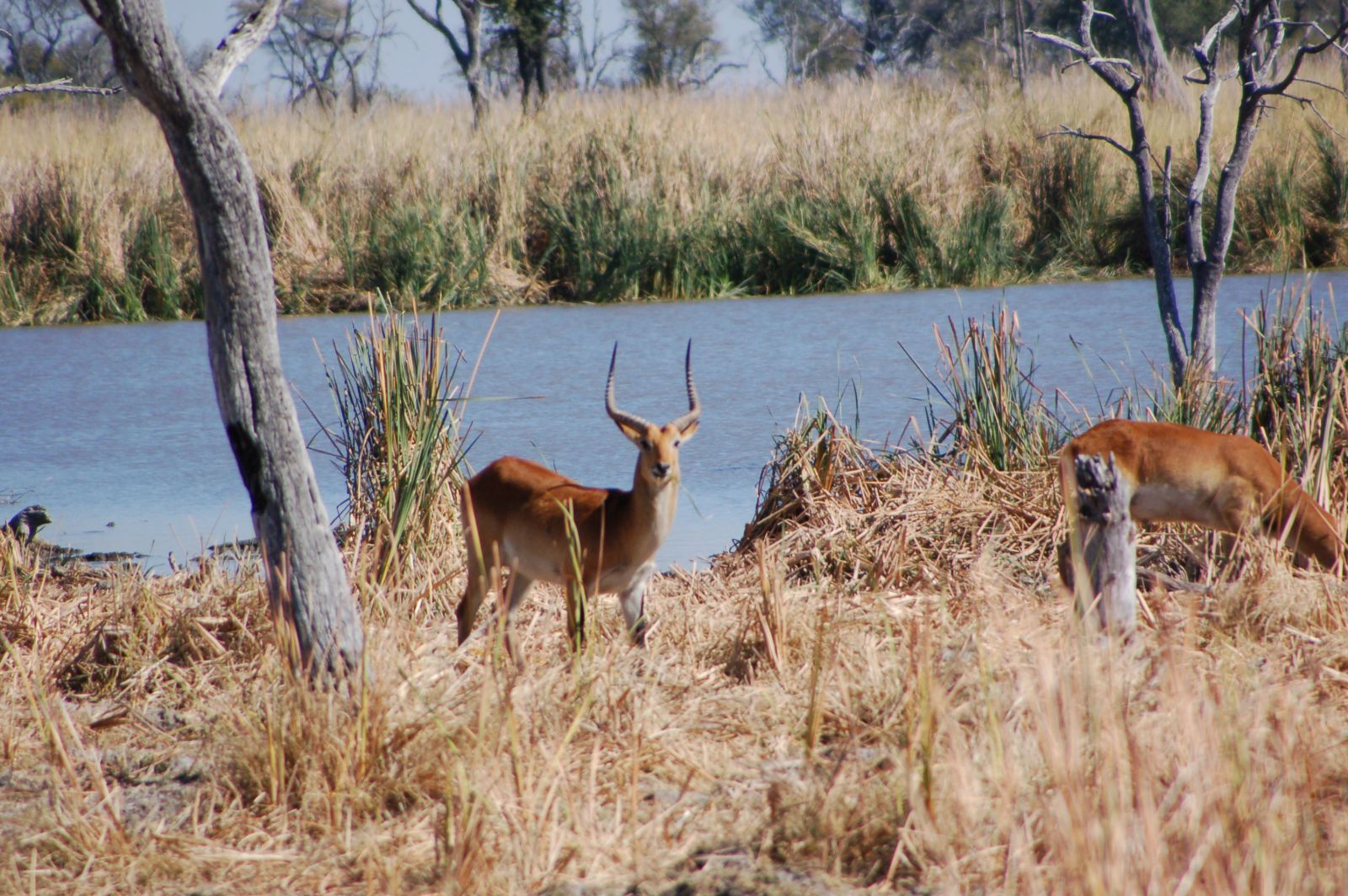 Habitat: Lechwes are partial to wetlands, lagoons, marshes and floodplains of less than 1 metre in depth. Yet, they are not averse to cross deep water to find greener pastures. They also roam woodlands adjacent to water. They are never far from water as they move somewhat clumsily on firm land.

Food: Lechwes are moslty grazers feeding on various species of grasses and aquatic plants. They can forage half-submerged with water up to their shoulder.

Social behavior: Lechwes social structure is very flexible and diverse depending on the subspecies and ecological conditions. It is an extremely gregarious antelope which can form herds of several hundreds of individuals. One can distinguish several types of herds. The most common is the mixed herd composed mostly of females and their young and dominant males. Dominant males form territories where they try to hold the passing females similarlay to wildebeests. Dominance is conveyed through several postures and displays. Territorial males usually stand erect in the centre of their territory, chin forward and with penile display. They also tend to thrash surrounding vegetation with their horns. Non-territorial males are tolerated if they do not try to mate. They may form bachelor herds at the periphery of mixed herds. Considering lechwes high-densities, male territories tend to be small and competition is high. If territorial and dominance displays are not sufficient, fights may ensue where the competitors will lock horns or push one another forehead against forehead at ground level. The weaker one will disengage.

During the rut, some lechwe subspecies may form leks. Leks are reproduction arenas composed of several micro-territories each held by a dominant male. Females will specifically and willingly fo to leks to reproduce. Only dominant male can occupy a spot on the lek. This allows females to avoid harassment from non-territorial males in mixed herds. Indeed, the female is also the one choosing her suitor. This also allows the dominant males to reproduce with many females in very limited times. Leks also provide opportunities for non-dominant males to mate as they try to intercept females when they go or leave the lek.

Lekking is especially prevalent with the Kafue lechwe and to a lesser extent with the black lechwe. Lekking is rare with the red lechwe and only happens in areas of very high lechwer density. Lekking tend to happen when feeding resources attract very high densities of lechwe to a same spot. In these conditions, keeping and defending territories when males are so numerous would be exhausting for territorial males whereas monopolizing territories in the mating arena which is off limit to non-dominant males lessens competition somewhat. Lekking is also prevalent with the Buffon kob which is a close relative and with some subspecies of topis.

Reproductive behavior: Lechwes reproduce all year long but there is peak in the wet season. Males test females receptivity by testing their urine through flehmen. If receptive, the male does the laufshlag (lunge of the foreleg between the hind legs of the female or to the abdomen) before mounting. Gestation lasts 7 months and a half. Female isolate to give birth. The calf remains hidden in vegetation for the first few weeks. The mother comes to visit the calf regularly during the day to enable it to suckle. After a few weeks, it joins the herd where he may gather into nurseries with other calves of the year.

Predators: Lions, leopards, cheetahs, African wild dogs, spotted hyenas, crocodiles all predate on lechwes. Lechwes will not hesitate to dive into water to evade predators and easily outdistance predators in water. They are not as fast on land as their hooves are adapted to wetlands and constitute a handicap on land. Rock pythons also prey on female lechwes and calves. The later are also hunted by jackals, honey badgers and raptors.

Best places to see it: The Okavango Delta in Botswana boasts the highest concentration of lechwes where they are easily seen. Big herds are also found on the Busunga Plains in the north of Kafue in Zambia.