An arboreal primate which is easily identified thanks to its beautiful thick white and black coat. Nine subspecies may be distinguished in the forested ecosystems of Equatorial Africa from Nigeria, Gabon and Cameroon in the West to western Ethiopia, Kenya, Tanzania in the East going through the Central African Republic and Uganda. Despite a wide distribution, it is quite difficult to see due to its arboreal lifestyle and the diminishing forest cover in which it lives. 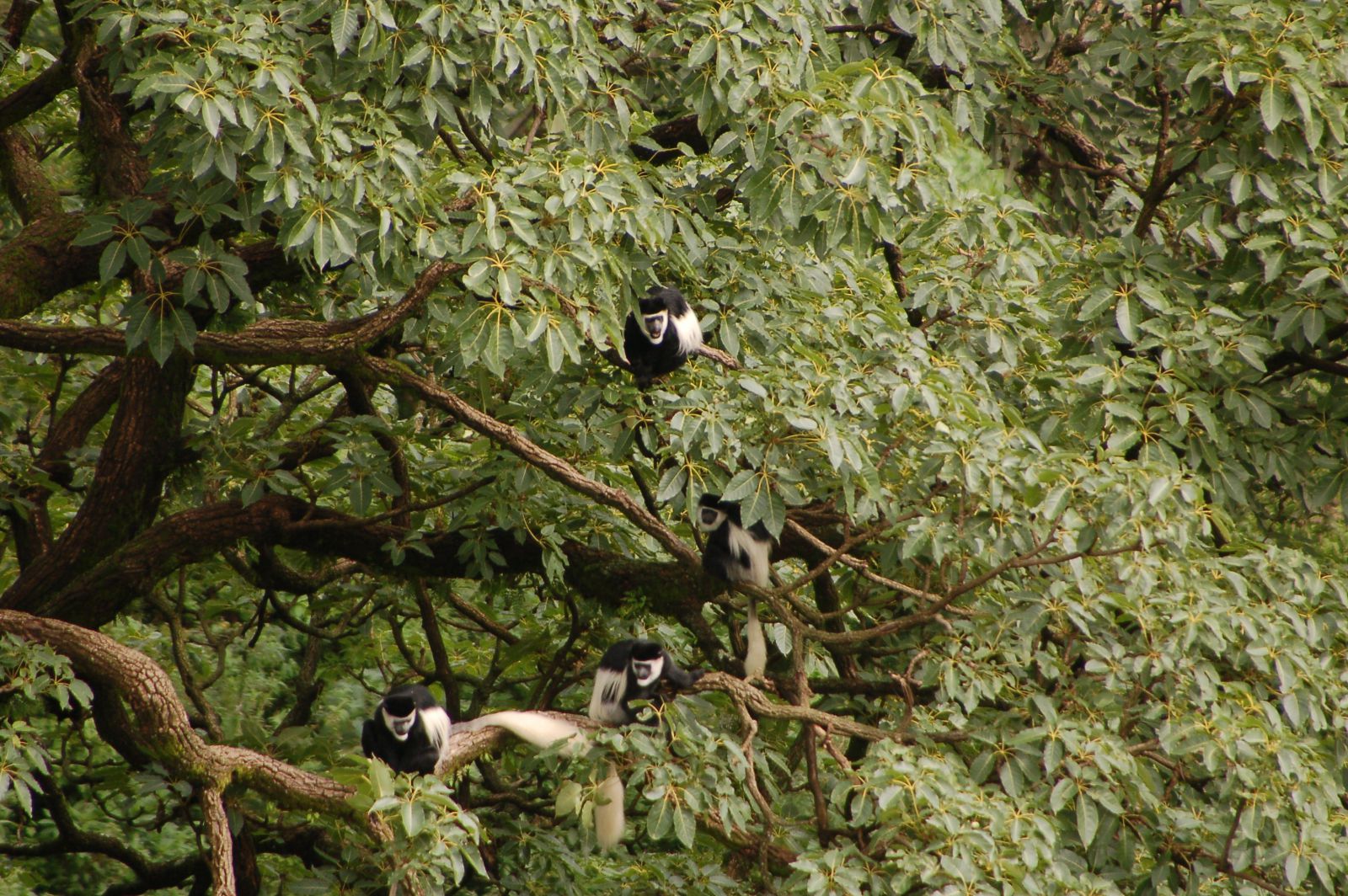 Habitat: All forest ecosystems from primary and secondary evergreen lowland forests to forest galleries, moist montane forests and forests adjacent to rivers and other major waterways.

Food: Folivorous mostly. It feeds on a wide variety of foliage being especially partial to young  leaves which are rich in protein and low in fibre. Yet, guerezas are able to digest mature leaves despite their high alkaloid levels which is useful when food is scarce. Guerezas also feed on unripe fruits contrary to other monkeys and especially try to extract the pulp. This enables them to fend off competition.

Social behaviour: Guereza colobus live in troops numbering a dozen individuals comprising several females and their young accompanied by an alpha male and sometimes 1 to up to 5 male followers. There is also hierarchy among females with the oldest female taking the lead especially to determine the movements of the troop. Aside from this family troops, there all-male troops composed of young males who left their natal troops and band together bidding their time until they are strong enough to oust an alpha male from this troop and takeover which may also lead to infanticide. The presence of all-male troops in the periphery of a family troop is often the sign of an upcoming takeover as soon as the alpha male shows signs of weakness.

Troops live within home ranges which are quite small due to the sedentary life-style fo guerezas and the cohesion within a troop materialized by the weak social distancing between members of the troop. Yet; the alpha male sometimes with his followers display territorial behaviour. They often use powerful calls to indicate their presence and the existence of the territory to ensure spacing with the other troops. They also use visual signal by sitting on the uppermost branches of a tree with a stiff leg stance where they leave their legs dangling in the air while displaying as well their genitals. Another tactic is also to launch themselves in the air to land on lower branches using the sound from the crash to indicate territorial presence. Each troop defend its home range and the resources that it holds and confrontation between troops can be quite agonistic.

Because of their folivorous lifestyle, guereza colobus have a very sedentary lifestyle. They spend have their time resting, taking sunbaths and sometimes just sit there motionless almost in lethargy. A third of the time is devoted to foraging, more often than not in the same tree or group of trees where they had their sunbath. They do not need to move that much as a single tree of group of trees will provide them all the food that they need. A certain amount of time is also spent grooming and playing which reinforces social cohesion within the troop. Females are young are usually more involved in grooming than the alpha male. They go back to their sleeping tree as night sets in.

Reproductive behaviour: There is no mating period nor is there apparent signs of receptivity among female guerezas. Both males and females are likely to initiate mating by approaching the wanted partner while emitting some mouth-clicking or tongue smackiing sounds. Females sometimes present their hind to males while crouching in order to sollicit mating. The gestation period lasts 158 days and the female gives birth to one baby. The later hangs to the female's belly in the first weeks following parturition. The young is often handled by other members of the troops, especially females. When the baby begins to show distress, the mother takes him back. She may also prevent other members to take it from her.

Predators: Big raptors and especially the crowned eagle are the main predators although adults seem more than able to defend themselves against them, especially the alpha male who will not hesitate to confront the eagle if needed. When attacked, the troop can also dive below the canopy to the lowest branches in a crash. The leopard also preys on colobus opportunistically. Potential predators include African golden cats and rock pythons. The arboreal lifestyle of guereza colobus put them out of reach of other usual African savannah predators.

Best place to see them: Hard to say. Although present in the gallery forests of the Senregeti's Western Corridor, spotting them remains quite random. Harenna Forest in the Bale Mountains is the only place where I could have a glimpse of them.