The hartebeest is a big antelope from the alcephalini tribe which also includes the wildebeest and the topi. Like the later, it has a sloping back resulting from its forequarter being higher than his hindquarter. It is easily recognizable by its long and narrow face and snout. Seven subspecies of hartebeests may be distinguished which differentiate from one another by the shape of their horns and the color of their coats. One of the rarest subspecies is Swayne's hartebeest (Alcephalus swaynei) endemic to Ethiopia and critically endangered. Its has a very dark brown coat and is probably the darkest subspecies alongside the red hartebeest (Alcephalus caama) of the Kalahari desert with its vibrant reddish coat with dark patches on the legs and shoulders reminiscent of topis. Contrary to Swayne's hartebeest, the red hartebeest remains common and widespread in Botswana, Namibia, Zimbabwe and northern South Africa. It one of the most emblematic antelopes of the Kalahari alongside the gemsbok and the springbok. The tora hartebeest (Alcelaphus tora) is another critically endangered subspecies localised in Ethiopia and Erythrea. It can be distinguished by its horns which have a wide span and diverge laterally more so than any other subspecies. The Lichtenstein's hartebeest (Alcelaphus Lichtensteinii) is another subspecies found in the miombo best around the rainforests of the Congo Basin. Its horns are shorter than in other subspecies but it is one of the biggest.  It is found mostly in southern Tanzania especially in the Selous Game Reserve, in Zambia, Zimbabwe, Angola, Mozambique. The lelwel (Alcelaphus lelwel) is one of the most distinguishable subpsecies as its face and snount are even more narrow than usually the case in hartebeests. Its horns are also very long and vertical with the tips pointing backwards. Its coat is somewhat darker than other Eastern African subspecies with reddish hues. It is found in the Central African Republic, Chad, the Democratic Republic of the Congo, Ethiopia, Kenya, Sudan, Tanzania and Uganda. The largest subspecies is the Western hartebeest (Alcelaphus major) recognizable by its large size, its coat which the palest of all subspecies and its long and thick and very ringed U-shaped horns. The last subspecies, the Coke's hartebeest (Alcelaphus cooki) is also the most widely known as it is present in Southern Kenya and Tanzania in the Mara-Serengeti ecosystem. 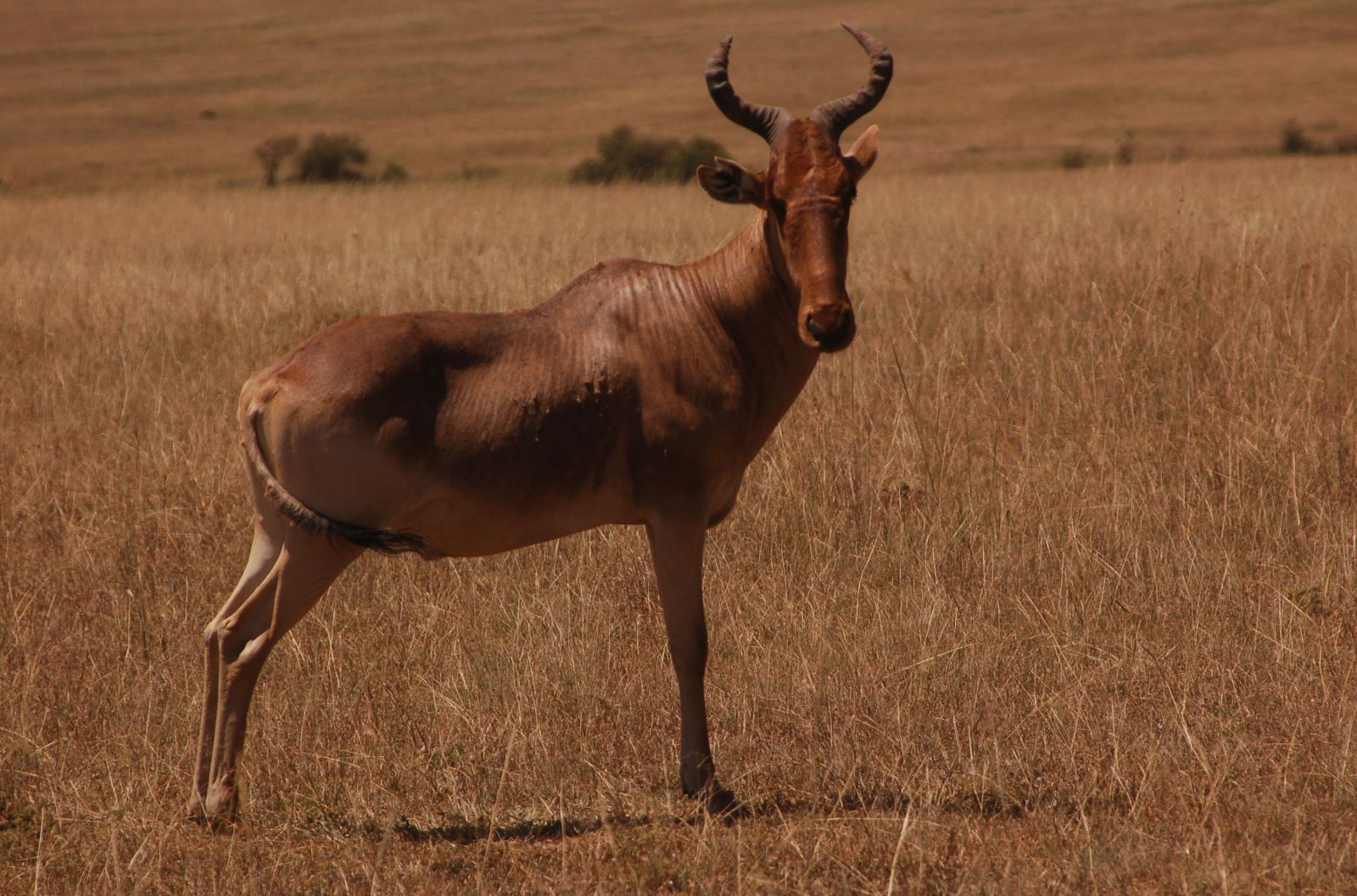 MEASUREMENTS (varies from one subspecies to the other)

Habitat: Typical savannah species especially grasslands and wooded savannahs even though it is rarely found in the middle of open plains contrary to wildebeests and topis. Instead, it is more partial to ecotones between woodlands and grasslands. The Lichstenstein's hartebest actually enters miombo woodlands. At the opposite end of the spectrum, the red hartebeest is found in semi-deserts and arid landscapes of Southern Africa. The Tora hartebeest was also found in arid habitats.

Food: The hartebeest's long and narrow snouts indicates that it is a very selective feeder. It feeds mostly on mid-height grasses (high up to the knee) from which it crops green swards and flushes but also sheath and leaf blades. It can also feed on senescence grasses. Its highly efficient digestive system coupled with its low metabolic requirements enable the hartebeest to fulfill all its energetic needs despite limited food intake. It can thus survive in arid landscapes or during the dry season and outcopet other grazers like the the roan antelope which have to switch to browse and less palatable foliage. Hartebeests drink regularly but can go without water for a few days.

Males mark their territories by using their preorbital glands which release a dark substance which is wiped on vegetal stems which inserted in the glands. However, male hartebeest are more likely to use defecation to mark their territory especially through the use of dung piles strategically located at the border of territories. These dung piles attract neighboring males which will execute a territotorial ritual where each in turn will sniff the dung piles, paw it and eventually kneel to rub their head and horns in it. Other more typical alcephalini territorial behavior is for the male to stand erect in proud posture conspicuously within his territory, if possible on an elevated position. Rock canter and cavorting are also usual territorial displays.

When an intruder trespasses, if it is of an inferior status, it will usually run away as soon as it sees the territorial male. If the two males have similar status and are of equivalent strength, the intruder may perfor neck-sliding to determine the status of the territorial male where he will nimble the neck of the territorial male. The later may respond through lateral display. Another behavior typical of the hartebeest of both sexes is to shoulder-wipe where they will suddenly wipe their heads on each shoulder when confronted by another hartebeest.

Female herds have a loose structure and females are not closely connected to one another.The bond between a cow and her calf is the only solid relationship. These female herds cross male territories in search of forage. The later will then try to prevent the females to leave his territory in the hope to mate. They can become aggressive against accompanying calf which may prompt retaliatory behavior fom the females. Young males leace their mother after a year and join bachelor herds composed of other young males or more mature males in search of territories or who have just been ousted from their territories. They sometimes try to win it back bt often have to settle for substandard marginal territories on the fringes of the richest ones.

Reproduction: Hartebeests reproduce all year long. When a female enters a male's territory, the later will circle her and lick her genitals which may promt her to urinate. Contrary to all other antelopes, the male does not test the female's receptivity through flehmen. Instead he may then make a lateral display to prevent her from running way as is often the case and gets closer to her in low-stretch posture with ears lowered. If the female does not run away, mating may proceed. It may be disturbed by neighboring males in the hope that the fleeing female will enter their territory.

Gestation lasts 8 months. The female isolates herself in vegetation to give birth. The calf remains hidden in vegetation during the first few weeks and come out only to suckle. For some hartebeest subspecies, birth peaks are recorded at the beginning of the rainy seasons where food is more plentiful. This is especially the case of the Coke's hartebeest. Once the calf joins the herd, it may join other calves in nurseries. Females are sexually mature after 16 to 18 months and 18 months for the males. However, males do not mate before establishing a territory of their own.

Predators: Lions, spotted hyenas, packs of African wild dogs, crocodiles are the main predators of adults. Leopards and cheetahs also prey on adults but prefer the young and subadults. Hartebeest rarely fall prey to predators thanks to their high speed. They may also defend themselves against a lone hyena, cheetah or leopard. There is at least one case on record of a leopard dying its wounds inflicted by the hartebeest he killed.
Calves are also preyed upon by jackals, hyenas, baboons and rock pythons.