The gerenuk is an odd looking species with a very long neck similar to that of a giraffe. It is endemic to Eastern Africa where it survives in arid landscapes and thorny savannahs. Like other arid species such as the oryx, the eland and other gazelles, the gerenuk has a system of thermo regulation in order to cool the temperature of its brain. One can distinguish two sub-species: the northern gerenuk (Litocranius sclateri) and the southern gerenuk (Litocranius walleri). The two sub-species are very similar in apperance and hard to distinguish from one another. The northern gerenuk is slightly bigger with a longer neck albeit with shorter horns. It is present in Ethiopia, Djibouti and Somalia while the southern gerenuk is present in the same countries but also in Kenya and Tanzania. 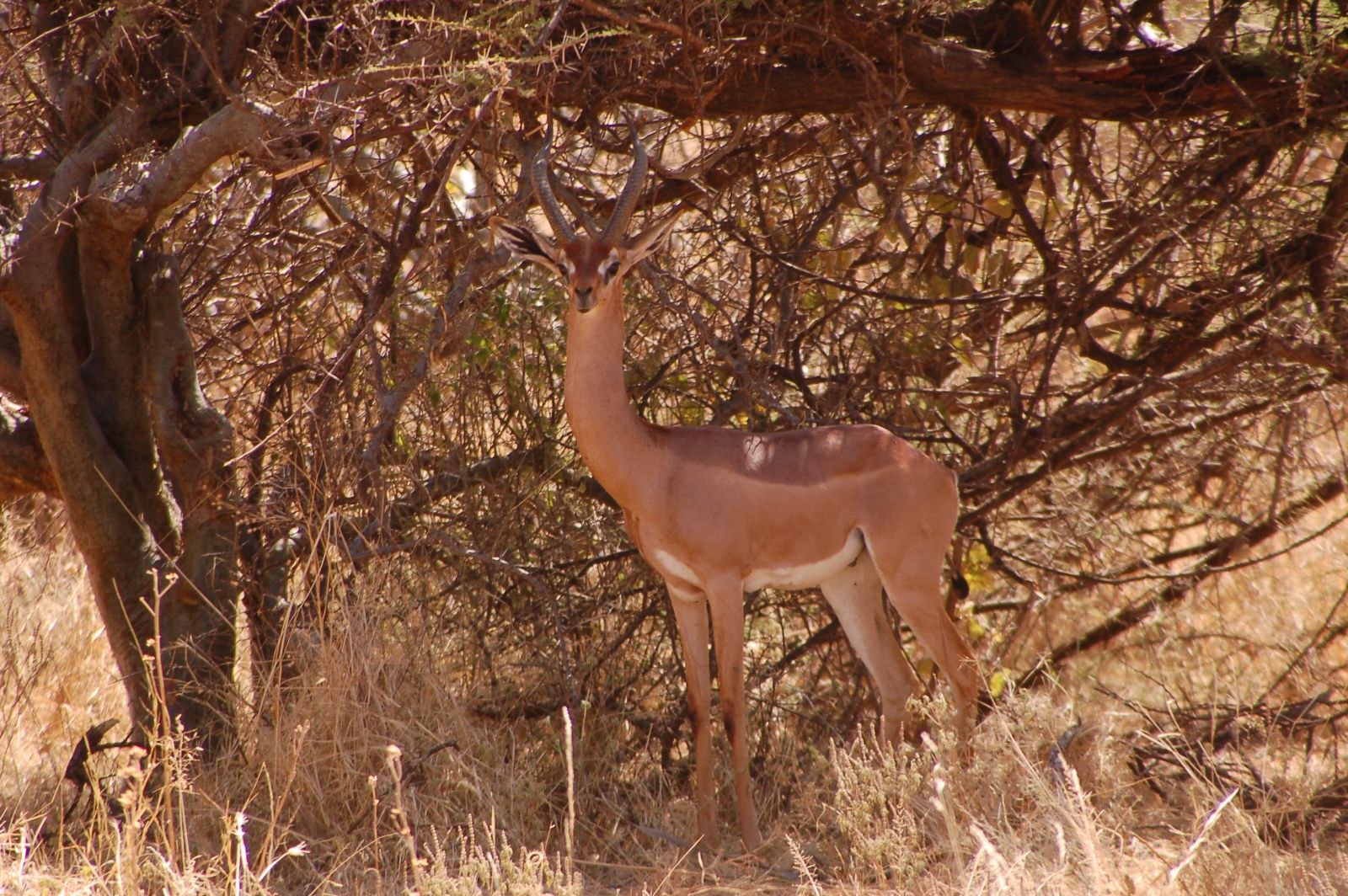 Food: An exclusive browser. It feeds mostly on acacia leaves, stems, flowers and even fruits. Its anatomy is entirely adapted to its browsing diet. Indeed, in addition to its long neck, it can raise on its hind legs to reach foliage out of reach from most browsers giving it an advantage over competition.

Behavior: Gerenuk lives in small groups of 5/6 individuals although gatherings of more up to 20 individuals may happen when feeding resources are plentiful. The social structure is flexible with individuals joining and leaving the groups as they please. It may include one male and several females. The only stable social structure is the mother and its young. Both males and females can also choose to live singly. Females with young can associate on the short/medium periods of time. Young males can associate in bachelor herds.

Adult males are territorial. They mark their territory by depositing a secretion on twigs and stems by using their protruding preorbital glands. They may also use urine and feces to a lesser extent or visually by standing erect in the middle of their territory similarly to topis and hartebeests.

Females have home ranges which may overlap and encompass several male territories. They rarely extend beyond 4 km2 and are usually around 1,5 to 3,5 km2.

Adult males dominate females when they are associated in mixed herds or when they meet randomly. A male can chase a female if they seek the same feeding spot. Other males are not tolerated by the territorial male. Yet, fights between males are rare. Shows of strength like vegetation thrashing or raking the ground with the horns are usually enough to deter intruders. The long and slim neck of the gerenouk is not suited for prolonged head-on clashes. Rather, males lock horns and give sudden but vigorous head nods or shakes. Raising the tail up is a sign of submission.

Reproduction: The female reaches sexual maturity at 1 year old. Gestation lasts between 28 to 29 weeks.
Courtship is similar to other antilopine. The male comes close to the female rump and kicks her hind legs with his outstretched foreleg ("laufschlag") prompting her to urinate. The male tests the female's urine to determine her receptivity through "flehmen". If the female is receptive, the male raises on his hindlegs, his forelegs dangling on each side of the female's rump and the copulation begins.

At birth, the calf remains hidden in vegetation. The female licks it to remove all odors and eat the placenta in order to thwart predators. The female will visit the calf periodically to enable it to suckle in the first weeks. It will begin to follow its mother after a month.

Predators: The gerenuk is preyed on by all major predators of the African savannah beginning with cheetah, leopard, wild dogs, hyenas, lion, Nile crocodile, and pythons. Fawns may be preyed upon by jackals, caracals and raptors.

Best places to see it: Not common anywhere, they are yet easily seen in the Samburu and Meru reserves in Kenya. One can see them with luck in the Tarangire in Tanzania which is the southern most limit of their range.