The sloth bear is one of the smallest sub-species of bears. It is the most widespread Indian bear which is found in the whole country from Southern India and Ceylan to the foothills of the Himalayas. They are solitary and adults only meet to mate. During the mating period, males fight one another in order to mate with the females and establish dominance. Females will mate with the males taking into account the hierarchy between them. Mothers carry the young on their back. Sloth bears are not territorial. They posess home ranges which can range fro 2 km2 in Sri Lanka for a female to more than 100 km2 for male bear in India. Males' home ranges are bigger than those of females. Sloth bears' home ranges overlap widely with one another but female bears maintain an exclusive areas within their range that they will defend more agressively. Sloth bears communicate with one another with the use of olfactive signals which are spread on trees and rocks through their claws.

Contrary to most bears, the sloth bear is an insectivore and feeds mainly on termites. The bear uses its long and powerful claws to break termite mounds before sucking up the termites in its jaw which is deprived of upper incisors for this specific purpose. The noise they made when they suck up is heard miles away. The lips and snout of this bear is very mobile and adapted to their dietary habit. 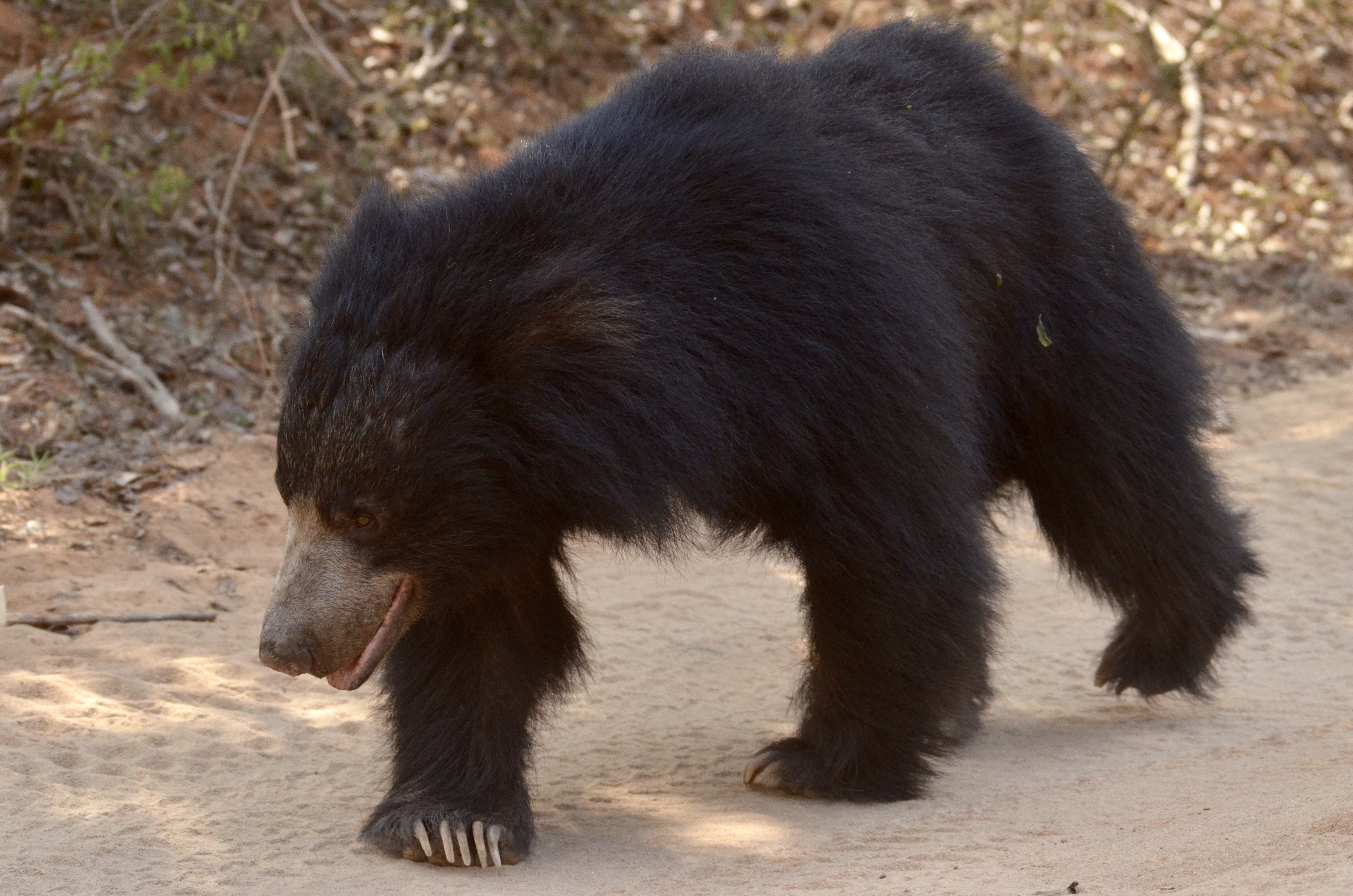 Predators: Tigers are the only animals which seriously pose a threat to an adult. However, the two predators avoid each other and most encounters involve intimidation charges without consequence. However on rare occasions, tigers may tackle an adult bear if easier prey is scarce or if the bear comes too close from tiger cubs. There are some documented cases where tigers have killed an adult bear. Bears on the other hand may sometimes be bold enouch to steal a tiger's kill. In most cases it seems that the size and experience of the protagonists involved will decide on the issue of the encounter.

Leopards represent a potential threat for an adult bear, especially since they are able to follow bears in trees. However, leopards will usually not tangle with adult bears and are more likely to take a cub. In Sri Lanka, a female leopard, managed to chase an adult bear away from its kill but sometimes the bear may succeed in stealing the leopard's prey.

Dholes when they are in pack may represent a more serious threat than a leopard. The sheer force of numbers allow them to chase away an inquisitive bear. However it is highly unlikely that they will consider the bear as prey. A big and determined dhole pack may overcome an adult bear even if some dholes may lose their life in the process similarly to what happens with tigers.

Best places to see it: Sloth bears are present in most Indian parks and reserves. However they are very hard to see due to their shyness and nocturnal habits. Sightings are never guaranteed whatever the park and patience and luck are needed. It seems that Tadoba in Maharashtra offers the most regular sightings. There are also numerous in Mudumalai in Tamil Nadu. Personally, I saw two sloth bears in the span of three days in Badhavgarh but this is not the norm. With a bit of luck you may see it in Kanha and Ranthambore.


They way more easier to see in Sri Lanka in Yala National Park and Wilpattu. Three days in the park should allow you to see one.  From May to June you may see them in trees eating palu fruits.