The hamadryas is a member of the Papio family which also includes the olive baboon (Papio anubis), the Guinea baboon (Papio papio), the yellow baboon (Papio cynocephalus), the kinda baboon (Papio kindae) and the chacma baboon (Papio ursinus). The hamadryas is adapated to arid and semiarid habitats of the Horn Africa and may also be found in the Arabic Peninsular in Yemen and western Saudi Arabia. It may be distinguished from other baboons by its white-greyish mane which is very visible in males and their pinkish faces. 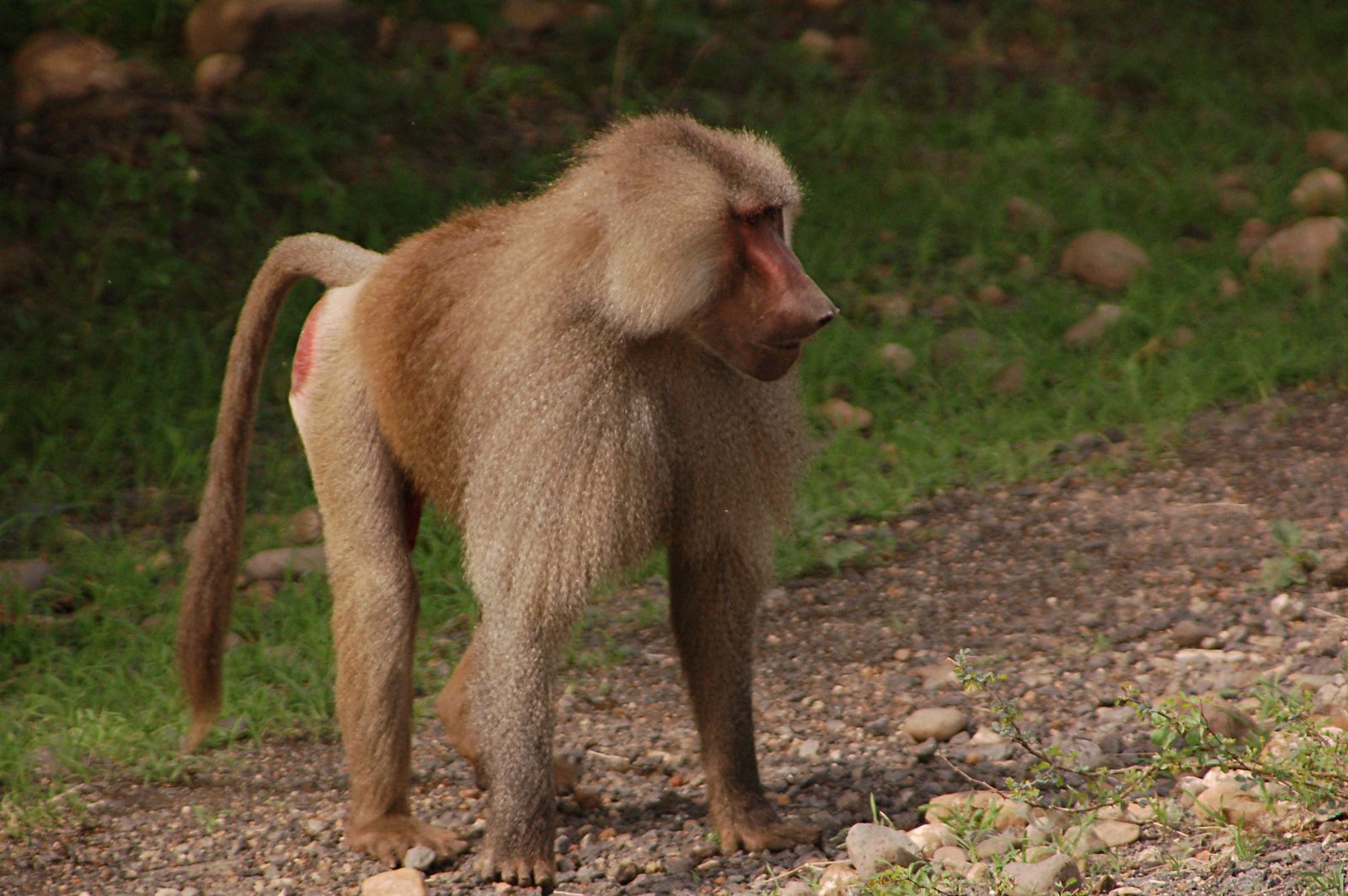 Food: The hamadryas is omnivorous feeding on plants and occasionally on small animals. Like other baboons, it feeds on flowers, foliage, seeds, rhizomes, tubes, pods, fruits and especially those from the doum palm tree. Opportunistic, they also feed on insects, lagomorphs, lizards, scorpions and arthropods.

Social behavior: The basic social structure is that of the single-male unit comprising up to a dozen individuals comprising several females and young led by a single male. The later has absolute power on the unit and will not hesitate to force females to remain within the group by threatening and biting them. When feeding resources allow, several single-male units will gather into a clan which numbering several dozens or even hundreds of individuals. These clans will also include solitary but non-dominant males, subordinate males and young adolescent males. It seems that males within a clan are affiliated. When a clan forms, the usually solitary males are then forced to interact with one another through grooming between solitary males or presenting rituals also called notification. These interactions mitigate competition between males to access and control females which is usually fierce. Like in other baboon species, females may also have their favourites among the males in exchange of their protection against harassment from other males or dominant females who would want to take their juveniles.

There is social stratus above the clan which is the troop composed of several clans. Females usually remain within their natal clan unless they are forced to join another clan as a result of males’ confrontations. Males leave the clan after reaching puberty. Like with other baboons, hamadryas dwell within home ranges the size of which may reach several dozen km2.

Hamadryas are diurnal and like other baboons find refuge in rocks or cliffs during the night to protect themselves from predators.

Reproductive behaviour: There is not mating season like with other baboons. The male leading the unit enjoys exclusive mating rights. Like with other baboons, females' receptivity can be identified by the swollen and scarlet red or pink skin around the perineum. The gestation period varies from 165 to 184 days. The baby hangs on its mothers' belly in the few weeks following parturition.

Predators: Few predators remain the hamadryas geographical range. In the rare zones where they remain like the Awash National Park in Ethiopia, leopards are the main predators followed by spotted hyenas and lions. Nile crocodiles and Seba pythons are potential predators. Great raptors are also a threat for young.

Best places to see it: Awash National Park in Ethiopia is probably the best place to see them. Elsewhere within their range, observation is random.