The plains zebra is one of the most frequently observed ungulate of the savannahs of Eastern and Southern Africa. One must not confuse the plains with zebra with two other zebra species which as the Grevy's zebra and the mountain zebra. The Grevy's zebra (Equus grevyi) is much bigger and is indeed the biggest wild equid in the world. It differs from the plains zebra also by its stripes patterns which are much more numerous, thinner. Its ears are bigger and rounder. Even their ecology is different. Grevy's zebras inhabit arid and dry savannahs while plains zebras inhabit more mesic ones. Also Grevy's zebra is territorial while the plains zebra is more nomadic and lives in harem centered around a stallion. Grevy's zebras are found mostly from southern Ethiopia to northern Kenya where they may be sympatric with plains zebras. The other species is the mountain zebra (Equus zebra) which is also slightly bigger than the plains zebra with a distinctive dewlap which is usually absent in other species. Mountain zebra have a narrow geographic range in the moutain ranges and arid zones of southern Angoloa and northern Namibia. There is also one population in the Cape region.

Five subpsecies of plains zebras can be distinguished which differ from one other mostly through their stripe patterns. Among these five subspecies, there is the Burchell zebra (Equus quagga burchelli) found in South Africa, Namibia and southern Botswana with its shadow stripes. Very similar is the Chapman's zebra (Equus quagga chapmani) which is the biggest subspecies with stripes going down to the hooves and who also bears shadow stripes. It is found mostly in South Africa, Northern Zimbabwe and Botswana, southern Angola and Namibia. Northerly, one finds the Boehm's or Grant's zebra (Equus quagga boehmi) which is the smallest subspecies with rather large stripes going down to the hooves. Its distribution follows the Rift Valley from Western Zambia to Ethiopia going through Tanzania, Kenya, Western Uganda and the South-Eastern part of the Democratic Republic of the Congo. Two subspecies have very limited ranges beginning with the half-maned zebra which looks very similar to the Boehm's zebra except for its very short or quasi absent mane and somewhat larger size. It is found in Kenya in the vicinity of Baringo Lake, Western Uganda and south-eastern Sudan. Finally, the Crawshay's zebra is a relatively big sub-species with thin and numerous stripes which join under the belly. It is quite easily observed in the Luangwa valley in Zambia, in south-western tanzania and Malai. 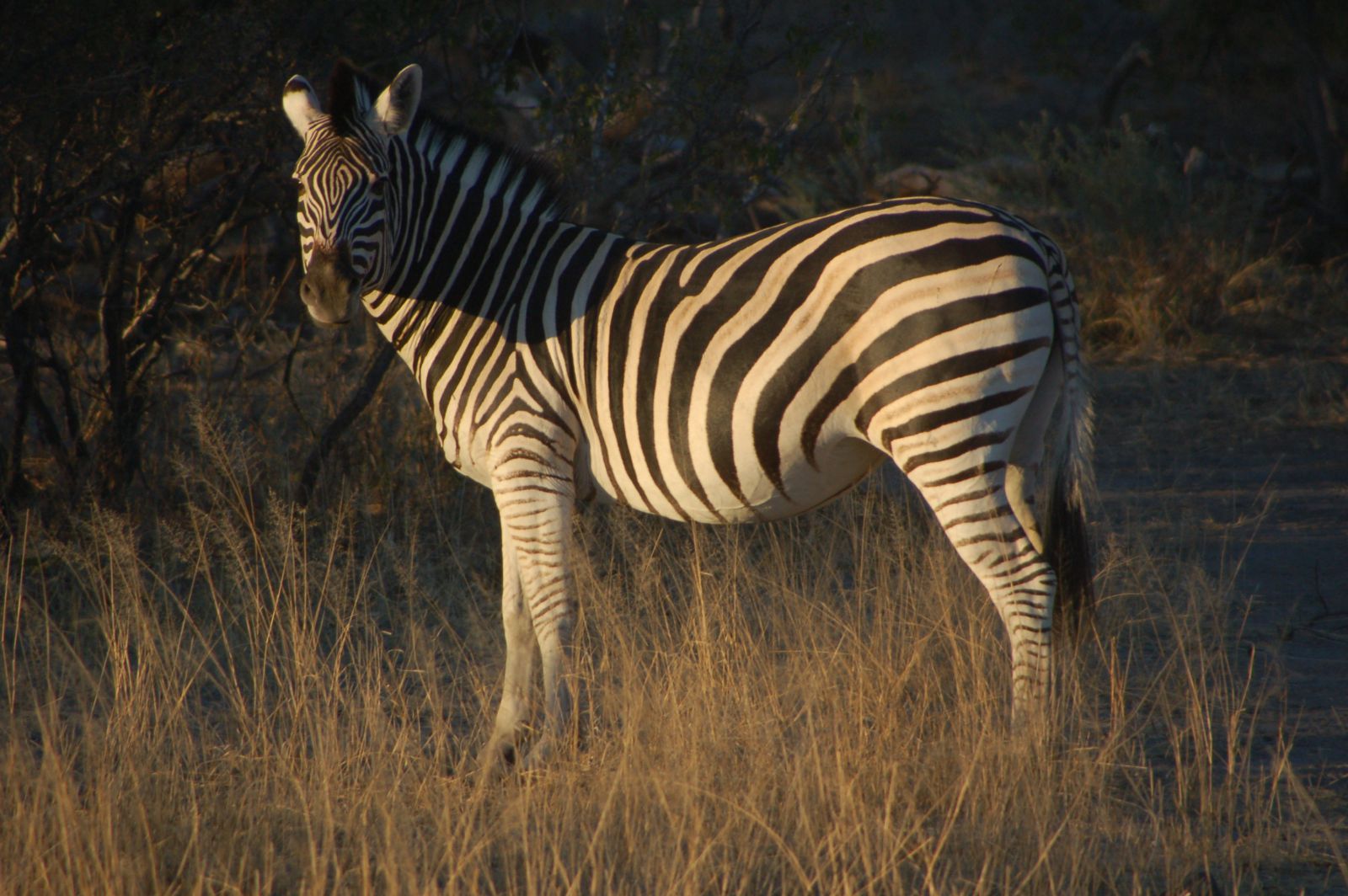 MEASUREMENTS (may vary from one subspecies to the other)

Food: A strict grazer. 90% of their diet is made of grasses with more than 50 different species recorded (Smuts). Zebras are bulk and non-selective grazers and feed on whatever grass species is the most common and more readily available. Their digestive track is not as sophiticated as bovids but processes food faster enabling zebras to ingest large quantity of forage in short periods of time which compensates for the low-nutritive value of the grasses their feed on. This is especially the case during the dry season where they feed mostly on fibrous plant species of less palatable to other grazers. Zebras play major ecological role as they feed on the tallest grasses cropping them to a height which is preferred to other grazers such as gazelles and wildebeests. This explains why wildebeests and zebras are often found together as the later's presence benefits the former.  Zebras are water dependent and their grazing pastures are never too far away from a waterhole.

Behavior and social structure: The basic social structure is centered around a harem composed of  a family stallion with several females and their young. There is a hierarchy among the members of the harem on which the stallion has complete dominance. After the stallion, the highest-ranking member is the alpha female who heads the herd and decides its movement and activities. It is followed by the other females based on their rank. The female who ranks the lowest is the last in the line. The stallion also brings up the rear as he protects his harem from other stallions and predators. Hierarchy among females is determined through brief fights involving bites and rearing with hind legs.

Plains zebras are not territorial. Rather, they roam through home ranges which may reach 400 to 600 km2 in average (Klingel) sometimes less if feeding resources are plentiful and perennial enough like the Kruger in South Africa or in the Ngorongoro in Tanzania. Plains zebras are rather diurnal and spend most of their day grazing which is almost 50% of their time. The rest of the time is spent resting and moving around. Before night falls, they gather in resting locations where they will spend the night and barely move. They may graze during the night.

Zebras show much solidarity between them. Lost members will be searched by the other zebras of the group who will also assist a member in distress or under attack by a predator. Zebras also groom one another especially around the neck and head areas reinforcing bonds between themselves. Grooming is mostly done between the stallion and some females and between the mare and the foal. Strangely, mares rarely groom eachother.  Nasal contacts are also frequent between all members of the herd. There is also a specific bonding ritual which occurs around dungpiles where all members will gather sniff and lip-curl before adding their own droppings to the pile.

When young stallions reach puberty, they leave the herd willingly and gather with other males in bachelor herds which can number as much as 15 stallions. They stay together until they form their own harem. This is done by abducting a fillie from harem which may cause a fight with the family stallion as the later will try to prevent his daughter from leaving the herd. Yet, if there are many persistant suitors around the harem, the family stallion will eventually tire from the constant defense of his harem which will taken advantage of my younger stallions to abduct a fillie to found their own harem. However, the abducted fillie can be taken away from the abductor by another young stallion. The abduction of fillies causes much ritual fighting between family stallions and interlopers which can still be quite violent. During fights, males stand side by side and try to bite one another on the head and neck, they also rear and kick with the hooves on their forepaws. The fight can also lead the two contestants to fall on their knees circling each other in a bid to seize the hock of the other. If one manages to do so, it does not let go until the other lies down on the flank motionless. And yet this might not put an end to the fight. Fights can also involve kicking with the hindlegs.  Fights can also be caused by the presence of a female in oestrus. Family stallions are not displaced through fighting. Rather, when they lose condition, a younger stallion will eventually notice it and shadow the movements of the harem until it take full control of it displacing peacefully the family stallion who may end up alone. It might take several weeks for the new stallion to be accepted by the females. The new family stallion may resort to infanticite and force a female to abort or kill a new-born foal.

Reproduction: Plains zebras reproduce all year long. When in oestrus, the mare adopts a distinctive facial expression with mouth open, hind legs slightly apart with tail slightly raised. It urinates more frequently than usual which will usually pick up the interest of the stallion who will follow her and sniff the genital area and gently nimble at her neck and head. Female may react aggressively by kicking with her hind legs and running away with the stallion in hot pursuit. Mating takes place when the female is ready by adopting the characteristic mating posture. Other females may express jealousy towards the female chosen by the stallion especially if it ranks low in the hierarchy and my bite and chase her (Estes).

After a one year gestation, the mare gives birth while laying on her flank usually under the watch of the family stallion. The foal weighs around 30 kg at birth and is very precocious. It can stand after 10 mn and sucke after an hour. It is weaned after a year. During the first days, the mother is quite agressive with other members of the harem and may threaten and chase them if they get too close to the foal in order to ensure that foal get imprint her smell and presence.

Predators: Lions, groups of spotted hyenas and to a lesser extent packs of wild dogs are the main predators of adult zebras. Yet, the zebra is a very difficult prey even for lions. They are very fast, strong and their hooves are extremely dangerous. One kick can break a lion's or hyena's jaw. There is one case on record where stallion killed a spotted hyena with kick to the head. A lioness also died of starvation after her jaws got broken by a zebra kick. Stallions are particularly aggressive, brave and valliant when defending their harems and will not hesitate to stand their ground against a group a hyenas or a pack of wild dogs through vicious kicking and biting. A zebra stallion was observed (Cullen) fighting a group of five hyenas one of which was seized by the rump of the back by the stallion and thrown away while another one received a kick on the head prompting the other 3 hyenas to flee. Sometimes other members of the harem will help the stallion stand his ground against pack of wild dogs or lions by forming a circle or half circle around the preadators to observe their movements. Females also defend their foals viantly against hyenas and wild dogs and will put to flight a solitary hyena, leopard or cheetah.

Coalition of male cheetahs occasionally prey on adult zebras but solitary cheetahs and leopards prefer to tackle foals and subadults. Leopard may exceptionally tackle adult zebras which are dangerous and big prey for a solitary hunter. There is however a video on Youtube and pictures of a limping male leopard killing effortlessly a full grown zebra mare that he ambushed just after she crossed the Mara river in Kenya where she was first attacked by a Nile crocodile. Nile crocodiles pose a threat to adult zebras when they come to drink or cross rivers. But there again, zebras will defend themselves by biting the crocodile's eye which is thei weak spot in their armored body. Zebras are also more prudent than wildebeests when approaching water.

Foals and subadults, aside from lions, hyeanas and packs of wild dogs are also regularly preyed upon by leopards and cheetahs.

Best places to see it: Zebras are present in most Eastern and Southern African parks and reserves. They are very easy to see. The Masai Mara in Kenya, the Ngorongoro and the Serengeti in Tanzania, Moremi, Chobe in Botswana and the Kruger in South Africa have especially good and frequent sightings.