There are three species of jackals in Africa with similar behaviour traits which explains why they are being dealt with together. The African golden wolf is none other than the formerly named golden jackal (Canis aureus). This change of name was justified by recent genetic studies which showed that it was more closely related to the wolf (Canis lupus) than the jackal despite the fact that its biology is closer to that of the jackal than the wolf but for marginal wolf species like the Arabian or Indian wolf. The golden jackal denomination now applies to one species of jackal widespread in Asia from the Near East to South-East Asia with a similar biology with what is now called the African golden wolf.  The African golden wolf is a small canid found in the whole Northern and Western Africa down to Kenya and northern Tanzania in East Africa. It can be distinguished by its relatively uniform tan to greyish coat with a white underbelly. The black-backed jackal (Canis mesomelas) as the name indicates has a wide black patch on the back similar to a saddle on an otherwise tanned coat. It is one of the most easily observed species on a safari which is found mostly in Southern and Eastern Africa. The last species is the side-striped jackal (Canis adustus) which has a greyish coat with more or less distinguishable black stripe on its flanks. It has a white tail tip while that of the African golden wolf is black which helps distinguish both species. The side-striped jackal is found in the Sahel, in Eastern Africa down to Southern Africa in north-eastern South Africa. The three species of jackals are often sympatric in many localities and especially in Eastern Africa. When this occurs, each species has its own ecological niche. The African golden wolf will favour the most arid and desertic biotopes while the side-striped jackal will occupy the woodlands. The black-backed jackal will occupy the grasslands and savannahs which is an intermediary biotope between that of the side-striped jackal and that of the African golden wolf. In the Ngorongoro crater, the three species live in close proximity. Within this setting, the side-striped jackal will remain more elusive and in the shadows of the other two species and hunt the smallest preys such as insects and rodents while the other two will more conspicuous. This is especially the case of the black-backed jackal who more than the other two species specializes in stealing food under the nose of lions and hyenas while the golden wolf will take a step back and is more likely to hunt by himself. 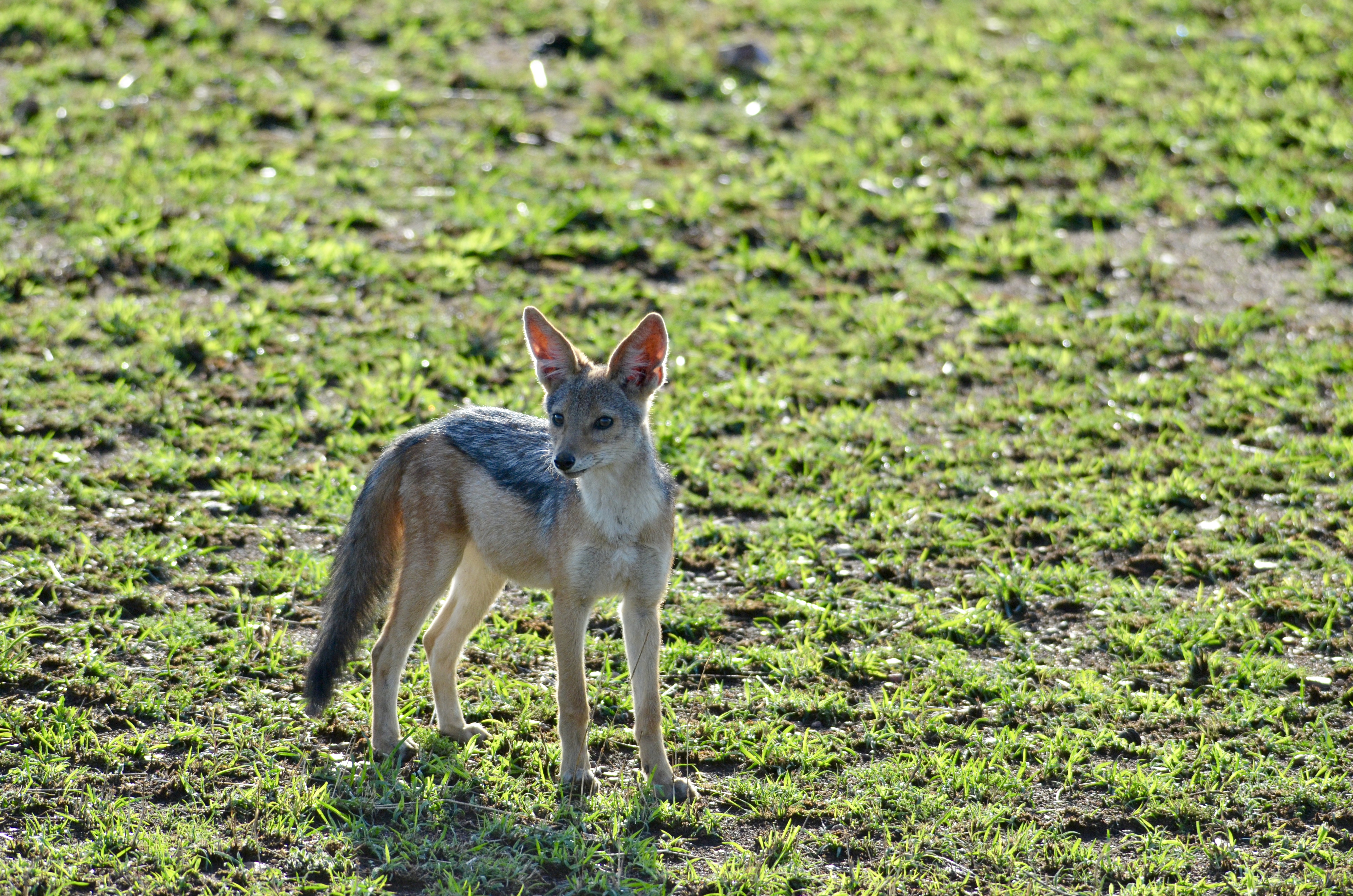 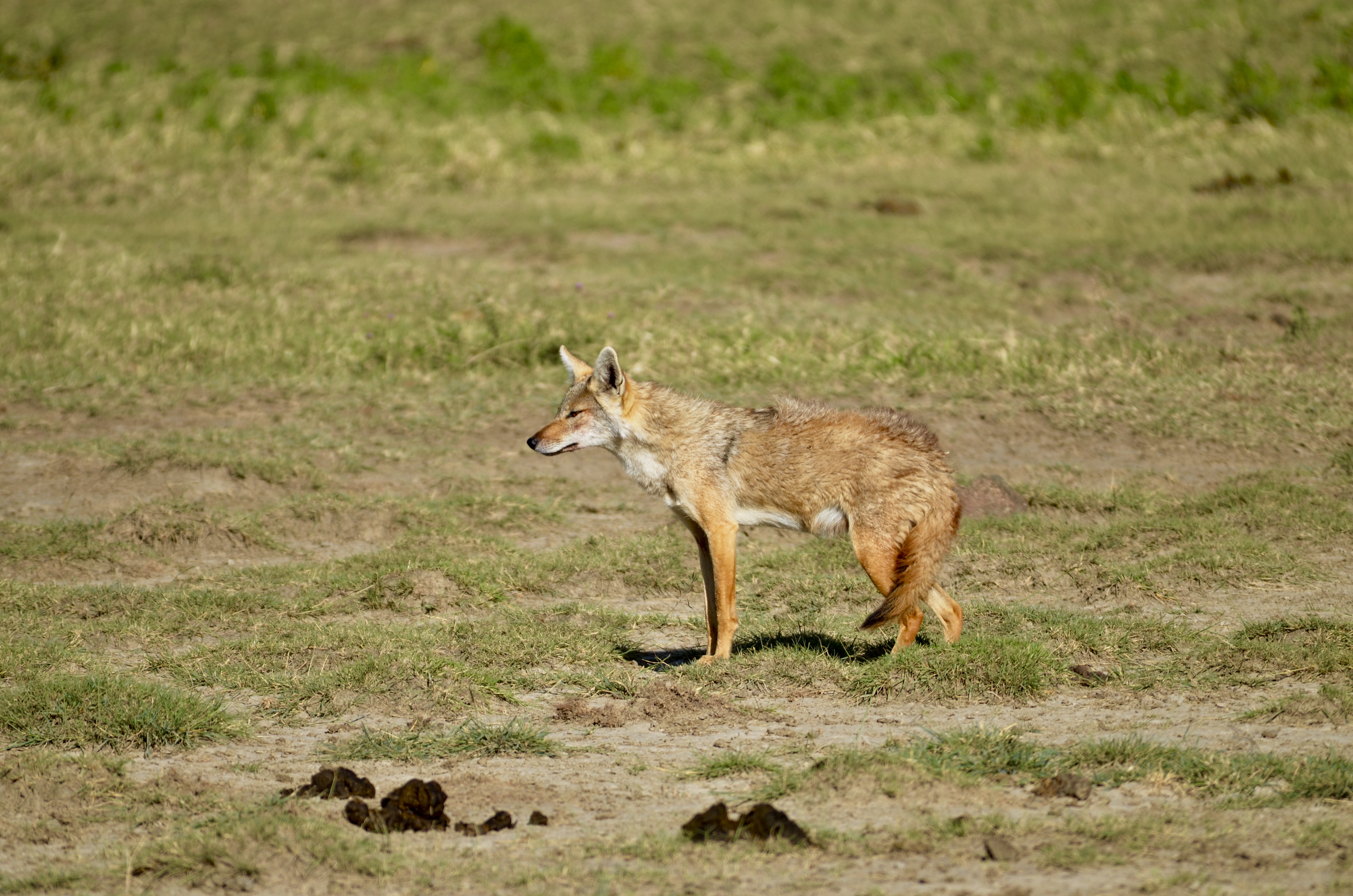 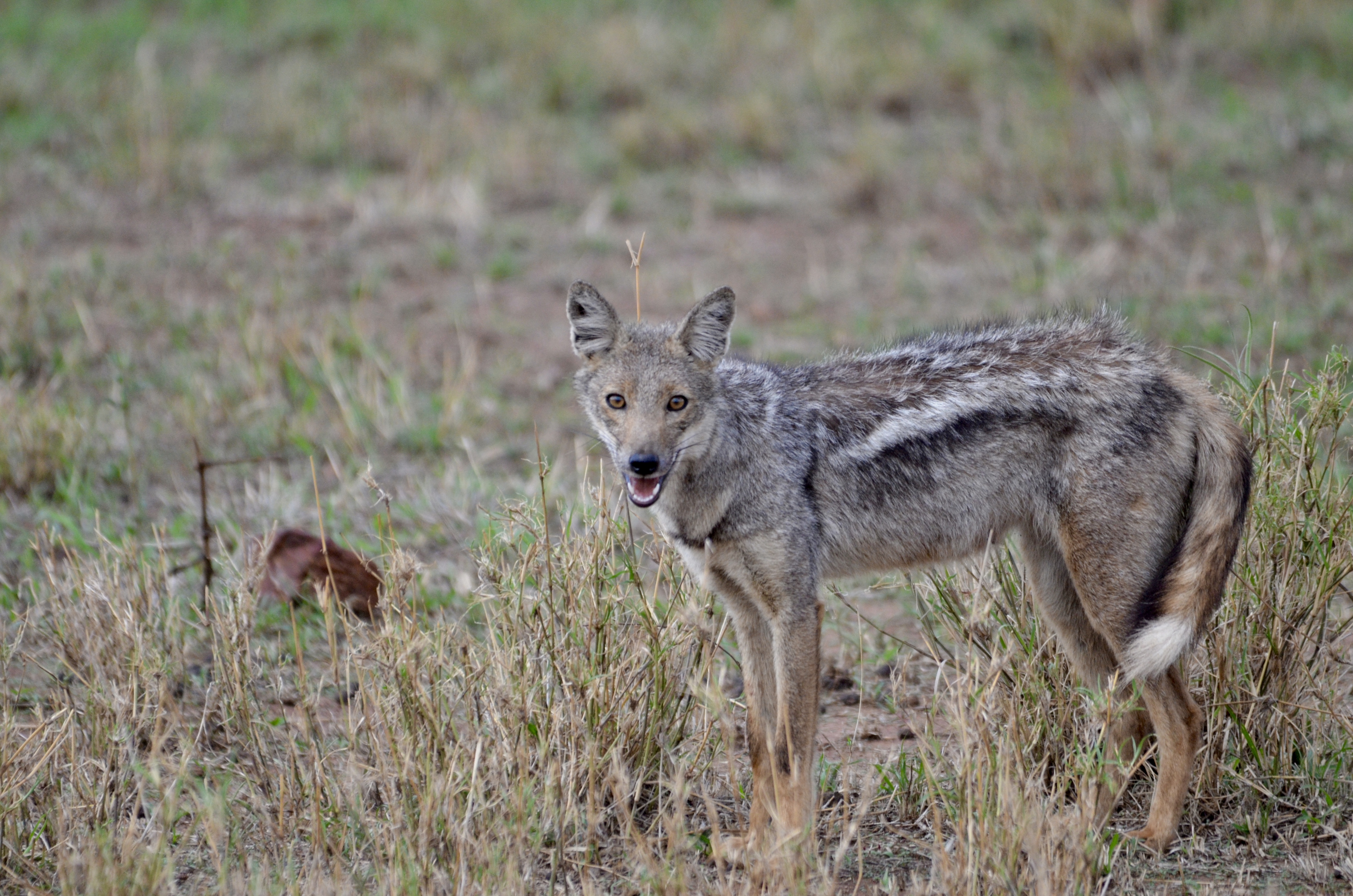 Habitat: All three species of jackal are able to live in a wide variety of biotopes. The African golden wolf is probably best adapted to arid environments, deserts and steppes, as it is even found in the Sahara. It is interesting to note that the golden jackal to which it has long been assimilated is present in the dense forests of Southeast Asia in Burma and Indochina, which is obviously a biotope at the opposite end of the spectrum, suggesting that the distinction between the golden wolf and the golden jackal is perhaps not as superficial as one might think at first glance. The black-backed Jackal is a savannah species par excellence but is highly adaptable and able to survive in a wide variety of biotopes ranging from the desert coasts of Namibia, through grassy savannahs, wooded savannahs and bush, to mountain meadows. The striped jackal is more likely to be found in wooded areas, whether it be wooded savannahs or miombo, at the edge of tropical rainforests, especially when sympatric with other jackal species. It is also found in swamps, grasslands and bush if the vegetation is sufficiently abundant.

Feeding ecology: Jackals are opportunistic and omnivorous predators and scavengers. They are capable of taking down prey two to three times their ozn weight, especially in groups, but this is relatively rare. In general, jackals feed on small prey such as insects, arthropods, rodents, lizards, snakes, lagomorphs and gazelle and antelope fawns such as impala, topi, wildebeest, hartebeest which are usually their largest preys. Exceptionally, a jackal or a pair of jackals may attack an adult Thompson's gazelle or springbok. The largest prey ever taken is an adult impala. Black-backed jackals in Namibia are also capable of attacking adult Cape fur seals, although they prefer to attack pups. When hunting rodents or small prey, the jackal uses the fox or serval technique of slowly approaching and leaping high into the air  with its paws joined together before landing on the rodent and grabbing it in its mouth to finish it off with a bite to the neck. When hunting larger prey such as antelope fawns or adult gazelles, it uses the classic canid technique of exhausting its prey and harassing it with bites until it succumbs. If the gazelle fawn, wildebeest or topi calf is protected by the mother which is more often than not the case, one jackal distracts the mother while the other jackal grabs the calf. Hunting in groups facilitates the hunting of small ungulates. An adult gazelle of any species is often able to fend off a lone jackal. Sometimes jackals will join hunting parties of hyenas or hunting cheetahs when hunting in the hope of getting a share of the remains.

A willing scavenger, the jackal feeds on prey left behind by larger predators.  It seems that the black-backed jackal is more daring than the golden wolf and the side-striped jackal in that it does not hesitate to steal meat from lions and hyenas without incurring their wrath. The golden wolf and the striped jackal seem to be more cautious and generally wait until the large predators have left before feeding on the remains. According to R.D. Estes, golden wolves may be bold in the presence of a lone hyena. While one jackal harasses it by biting its legs and evading it, the other takes advantage of the opportunity to steal its food. They will also not hesitate to steal meat from wild dogs and to face a lone wild dog with a growl if it comes to claim its due. All species of jackal dominate vultures regardless of their numbers.

Jackals also feed on plant material such as fruit.

Social structure and behaviour: All jackal species are monogamous and territorial. The basic social structure of the jackal is the monogamous pair, sometimes accompanied by helpers, which are usually young sub-adult jackals from a previous litter. The pair remains together for life and loses its territory if one member of the pair dies. The pair mark and defend their territory together against foreign jackals of the same sex. In African golden wolves, auxiliary jackals help defend the territory. Territories vary in size from 1 to 3 km2. Despite the territories, several jackals up to fifteen may gather around a large herbivore carcass.

The presence of young helpers allows the pair to search for food or patrol the territory while leaving their young under the supervision of the sub-adults, which greatly increases the chances of survival of a litter. The adult pair brings food back to the burrow which they share with the auxiliary jackals. They do, however, regurgitate food to the young. There seems to be more cohesion between a family of African golden wolves than between members of a family of black-backed jackals. Indeed, in the latter, the pups seem to be more aggressive and competitive with each other to the point of establishing a stricter hierarchy that will determine which of them will remain in the den as a helper and which will have to leave in search of a mate to establish a territory. In African golden wolves, the pups stay in the den as helpers for a longer period of time before emigrating. It is during emigration that a young female jackal will eventually meet a young male from a neighbouring territory with whom she will form a lifelong monogamous pair. Jackals use a whole repertoire of calls and howls to communicate with each other. There is also an alarm call to signal the approach of a predator. Tactile contact is also important in maintaining social cohesion through mutual grooming and other greeting rituals.
Jackals are more nocturnal animals but are often active during the day.

Breeding behaviour: Jackals breed all year round but there may be a breeding peak from May to August in some areas. Breeding behaviour is marked by several phases. The first phase is patrolling and joint marking of territory with faeces and urine. In the second phase, the female spreads her tail to one side and the two jackals approach each other with mane raised and much wailing and stand close together in a "T" formation allowing the female to lick the male's genitals while he nuzzles her. The third phase is the actual mating.

Gestation is about 60 days and jackal litters can consist of up to six pups. They open their eyes at about ten days and are weaned after two months. The young are quite playful. The parents and helpers defend them against predators up to the size of a hyena, which they will not hesitate to attack by biting its hind legs until it flees. However, they can do nothing against large felids.

Predators: The leopard is probably the most significant predator. While jackals will not hesitate to mingle with lions and hyenas around a carcass, they will avoid a carcass eaten by a leopard that might add them to the menu. Hyenas may opportunistically kill a jackal or steal its food, but a pair of jackals can effectively defend themselves against a lone hyena. Lions generally ignore jackals to the point of tolerating them around carcasses but could potentially prey on them. Cheetahs like to chase jackals but rarely kill them even if they are capable of doing so. Nile crocodiles and pythons, on the other hand, pose a real threat even to adult jackals. Caracals also dominate jackals in one-on-one encounters and can sometimes prevail over a pair. Caracals and jackals often compete for prey as their diets are very similar. Jackals will also give way to the ratel in a dispute over food but adult jackals will fight back if the ratel is trying to prey on a pup. The young are also threatened by large raptors.