There are five species of rhinos in the world, two of which live on the African continent including the black anf the white rhino. The white rhino is not really white but greyish just like the black rhino (diceros bircornis) which is only black by name. The reason why it is called the white rhino is because the Boeurs called it Weitrenoster: the wide-nose rhinoceros. The British understood white instead of white and it became the white rhino. It is the biggest terresrtrial mammal in Africa after the elephant and the biggest rhino species just in front of the Indian rhino (Rhinoceros unicornis). Until very recently, two subspecies of white rhinos could be distinguished, the northern white rhino (Ceratotherium sumum cottoni) and the southern white rhino (Ceratotherium simum). The later is only present in Southern and Eastern Africa (Kenya and Uganda) while the northern white rhino used to be present in Uganda, Sudan, South Sudan, Chad, Centrel African Republic. It is now extinct in the wild as a result of rhino horn trafficking. 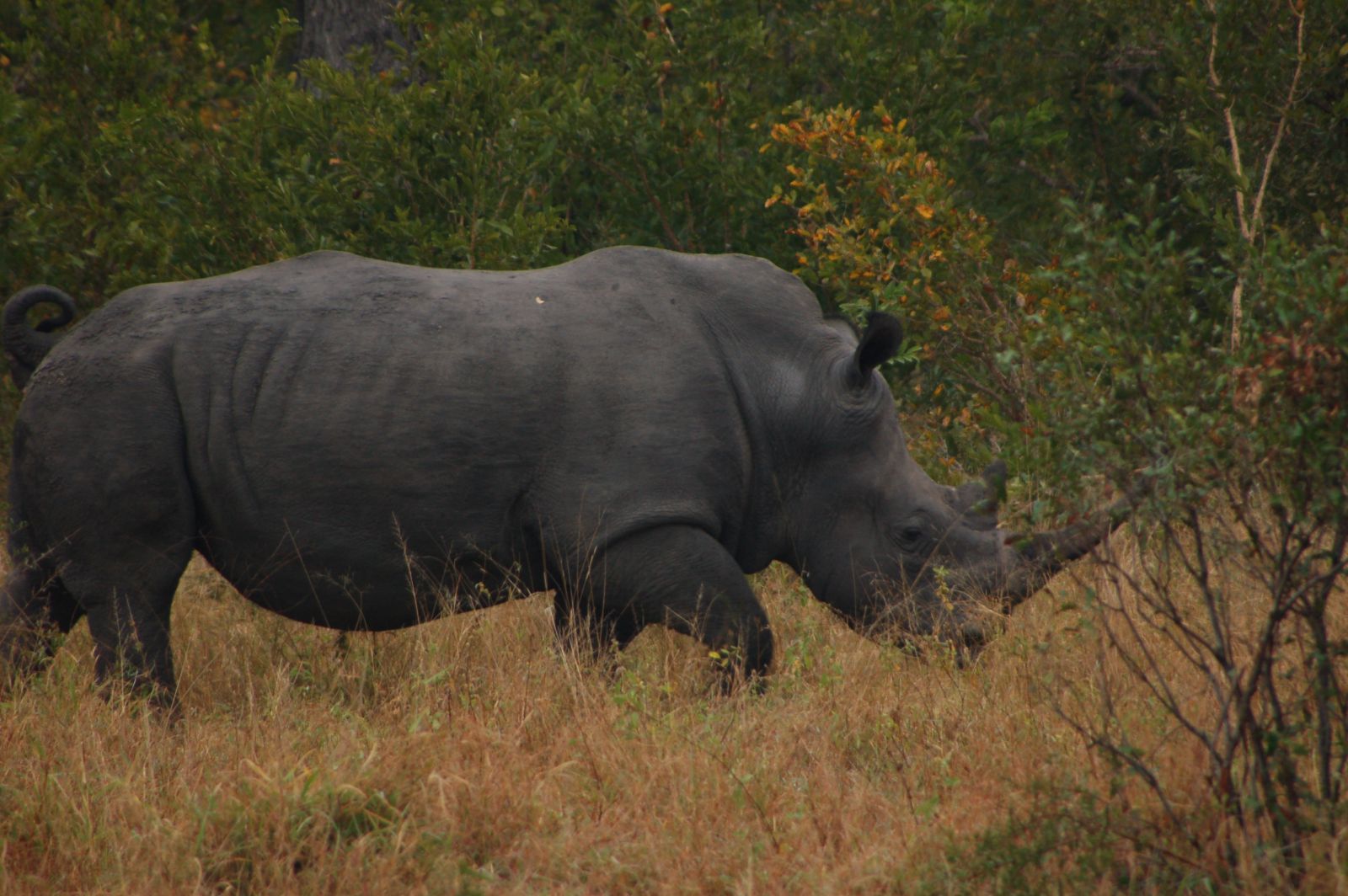 Habitat: Partial to wooded savannahs but it may be found in bushland and more open savannahs provided that there some form of tree cover and more importantly a permanent source of water which is requirement.

Food: A strict and bulk grazer. White rhinos are partial to short green grasses less than 10 cm high that it crops effortlessly thanks to its wide lips, the lower one being covered with a callous substance and the upper one being more prehensile enabling to seize large quantities of grass in one bite. White rhinos are highly water-dependent species and drink regularly usually at the end of the day or even at night.

Behavior and social structure: White rhinos are more social than black rhinos although calling it gregarious would be a bit of a stretch. Males establish territories where they tolerate satellite males provided that they adopt a submissive bahvior. These territories vary in size depending on feeding resources available and the density of the rhino population. When white rhinos are numerous, the territories tend to be small from 1km2 to 10 km2 while they may reach a 100 km2 in more arid areas with more scattered rhino populations. Male rhinos territories do not overlap. They are scent-marked with sprays of urine along the borders and dung scattering where the male  kicks a dung pile with his hind foot. When a strange male trespasses, the territorial male gets closer with the head held high and ears cocked. It may wipe the ground with his horn and get closer to the intruder until his horn clashes with that of the interloper while staring at him. He may clash horns with him repeatedly. If the intruder is no match, he will take a submissive posture with ears pointing backwards while shrieking in a bid to sue for peace. This is especially the case when the intruder is an adult male whose bulk does not allow him to run away quickly exposing him to horning in the rear by the territorial male. It is preferrable for adult subordinate males to stand their ground while acknowleding submission. Younger males or subadules who are nimbler and quicker will run away from such confrontation as soon as they get the chance.

When two territorial males meet at the border of their respective territory, they will also clash with their horns while staring at each other. Every now and then they will wipe their horns on the ground which is a sign of dominance. They then usually go back to their respective territory. More serious fights may occur when territorial male leaves his territory to drink and has to cross the territory of another male to do so or more frequently when he attempts to go back to his territory after a drink. Usually when a territorial male crosses the territory of another he adopts a submissive posture until he gets back to his own turf. However, if he fails to adopt a submissive posture while trespassing, a serious fight may ensue. When rhino fights they ram each other with their shoulders. If the fight escalates then may try to gore and thrust each other with their horns. Fights between white rhinos remain very rare. Serious fights may also develop when one male tries to take over the territory of another or if two territorial males court an oestrous female present on the border of their respective territory.

Female of white rhino are not territorial. Rather they occupy overlapping home-ranges which are usually around 10km2 in size. Their social structure is very flexible. More often than not they form a duo with their latest calf but may also be accompanied by an older daughter or an unaffiliated subadult rhino. More important groups numbering as much as a dozen rhinos may form  centered around a calfless adult female rhino and several male or female subadult rhinos or several calfless female rhinos may group together for short period of times.

White rhinos are active day and night. Half their time is spent foraging which is usually done early in the morning or late afternoon as with most grazers. They rest in the shade during the hottest part of the day and especially indulge in mud baths in order to get rid of ticks and parasites.

Reproduction: When a territorial male identifies a female in oestrus, he will try to prevent her from leaving his territory with any other rhino accompanying her. He will block her path while shrieking. The male urine tests the female's receptivity through flehmen (lip-curl to enable the pheromones contained the female's urine to reach the Jacobson's organ when they will be analyzed to determine receptivity). If the female is receptive, the male emits a hic-throb sound. The female reacts aggressively through mock-charges and much roaring. After several hours and her aggressivity lowers, the male may be able to rest his chin on her rump as prelude to mating.

The gestation period is 16 months. The female isolates to give birth to a single hornless calf weighiing around 60 kg. The calf will be able to stand after an hour. A month later he is able to accompany his mother and walks in front of her. He also runs in front of her to escape potential predators. It is weaned after one year.

Predators: Like elephants, full-grown adult rhinos are immune to predation. Calves may be taken by lions, spotted hyenas and potentially by Nile crocodiles and leopards.

There are cases on records from South Africa where orphaned young male elephants have killed adult rhinos but this is very rare.

Best places to see it: Similarly to the black rhino, the white rhino is found only in a few parks. Almost absent from Zambia, it is only found on Chief's Island in Moremi in Botswana. On the contrary it is easily seen in Hluhluwe game reserve and to a lesser extent in the Kruger in South Africa.

In Eastern Africa, only Nakuru National Park, in Kenya has a substantial population which is easily seen. Lewa Wildlife Conservancy is also a good bet.