The Serengeti Thompson gazelle is a small antelope endemic to East Africa.
It dwells West of the Rift Valley and is confined to the Mara-Serengeti ecosystem.
It is very similar to the Eastern Thompson Gazelle found East of the Rift Valley. It differs from it by its smaller size and by its face markings which are more pronunced.
Since the two species are not sympatric, there are no risks of misidentification in the field. 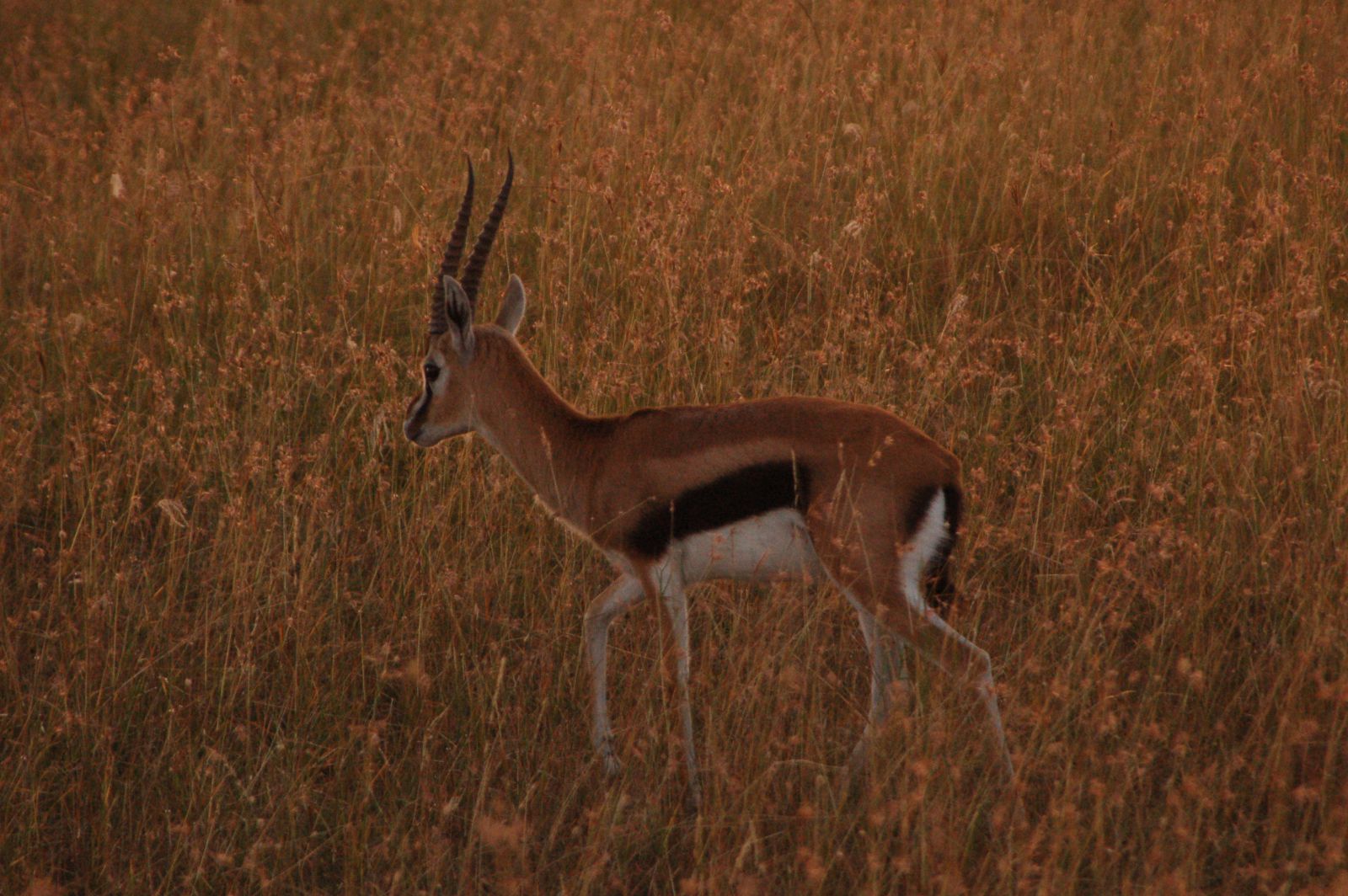 Habitat: Infeodated to dry short-grass plains and savannahs. According to Estes, it can also be found in tall-grass savannahs and open wooded savannahs especially during the migration. Based on the observation of Vesey-Fitzegerald quoted by Hashim and Kingdon, this species is partial to grass savannahs which have already been grazed and trampled by bigger species of herbivores such as zebras and wildebeests. It is quite frequent to find Thompson's gazelles in short-grass savannahs long after the other big herbivores have fone. Thompson's gazelles resist better than most other herbivores to periods of drought although it remains water-dependant contrary to the Sahel gazelles such as the slender-horned gazelle (Gazella leptoceros) and the dorcas gazelle (Gazella dorcas).

Feeding ecology: The Thompson's gazelle is mostly a grazer with 90% of its diet composed of grass of different kinds. However they have a prefer short species of grass. This is why they rely on bigger herbivores such as wildebeests, buffalos, topis, hartebeests and zebras to crop the grass at their preferred length which also makes other species of grass that they prefer accessible to them. However, it may browse and feed on forbs, shrubs, seeds and fruits during the dry season if grass is not nutritious enough to fulfill its needs. Contrary to zebras who can survive on poor nutritious forage, Thompson's gazelles have a high metabolism and need high nutritious plants to sustain themselves. They are particularly fond of lush and tender shoots and green grass.

Behavior: Thompson's gazelle is a gregarious species even if interactions between members of a same group are few and far between. Traditionally, one can distinguish three forms of social aggregations. Mixed groups, bachelor herds and female groups. Mixed groups may be composed of hundreds of individuals in periods of abundance or during the migration.

Males are territorial. Territories vary in size from 10 to 30 ha. Their boundaries are set through a secretion deposited on twigs and branches through by the males' preorbital glands. Urine and feces in the form of dungpiles strategically located are also used to mark territories. Territorial males try to keep females passing through their territories. They do so by standing in their way when they try to leave. It is rare for males to keep a territory beyon a year. Territorial behavior is not exhibited at all times and males may leave their territory to follow migratory herds or if ecological conditions require it (food and habitat).

Female groups are loosely composed and roam a home-range the size of which varies from 1 to 3 km in dimeter according to Kingdon.

Thompson gazelles have four activity peaks with feeding time in early morning, at noon, dusk and at midnight. The rest of the time they lie down to chew the cud. The also seek shadow in the hottest time of the day.

Reproduction: Thompson's gazelle's reproduction is similar to those of other antelope species. The male approaches the female in the head-low posture and nuzzles the female's rump prompting the later to urinate. The male will smell the female's urine through flehmen to determine its receptivity. If receptive and provided that the female does not run away, the male will execute the "laufschlag". It is a kick of one of the front legs held straight to the female's hind legs which is a prelude to copulation which is done while walking.

Females give birth to a calf after gestation period vayring in length from 160 to 180 days. For parturition, female isolate themselves in dense bush to avoid attention from predators. Young remain hidden in the first weeks and the female lick them to remove odors which might attract predators. Females visit their offspring on a daily basis to suckle and clean them. After 2 months, the young spend more and more time with his mother and eventually joins the herd.

Although birth can often happen at any time of the year, there is often a birth peak during the rainy season when food is abundance. Births peak also enable to mitigate loss to predators.

Predators: Thompson's gazelle is preyed upon by all the great predators of the African savannah from lions to jackals, caracals, rock pythons and Nile crocodiles. Because of its speed, the Thompson's gazelle is no easy prey. The cheetah is its main predator followed by African wild dog and leopard. It is rarely preyed upon by lion due to its small size and speed. The ratio between energy cost and energy gain does not make it an interesting species to hunt on regular basis for lions. The same goes for the spotted hyena who prefers to hunt the fawns who are easier prey. Fawns are also preyed upon by raptors, honey badgers, servals and jackals.

Best places to see it: Thompson'S gazelle is extremely easy to observe in the Serengeti-Mara ecosystem in Kenya and Tanzania, but also in the Nairobi National Park and Amboselli in Kenya.