The quitentessenial antelope typical of the Eastern and Southern African bus. The impala is very common in its whole range and in high density. You can drive hours in the bush without seeing anything except impala. A friend of mine compared them to pigeons in New York or Paris. The impala's success lies in its faculty to adapt to various biomes and feed from a wide range of plants.

Despite looking like an oversized gazelle, it is actually a mid-sized antelope and the unique member of the Aepycerotini tribe. A second race of impala exists at the border of Namibia nad Abgoloa called the dark-faced impala. 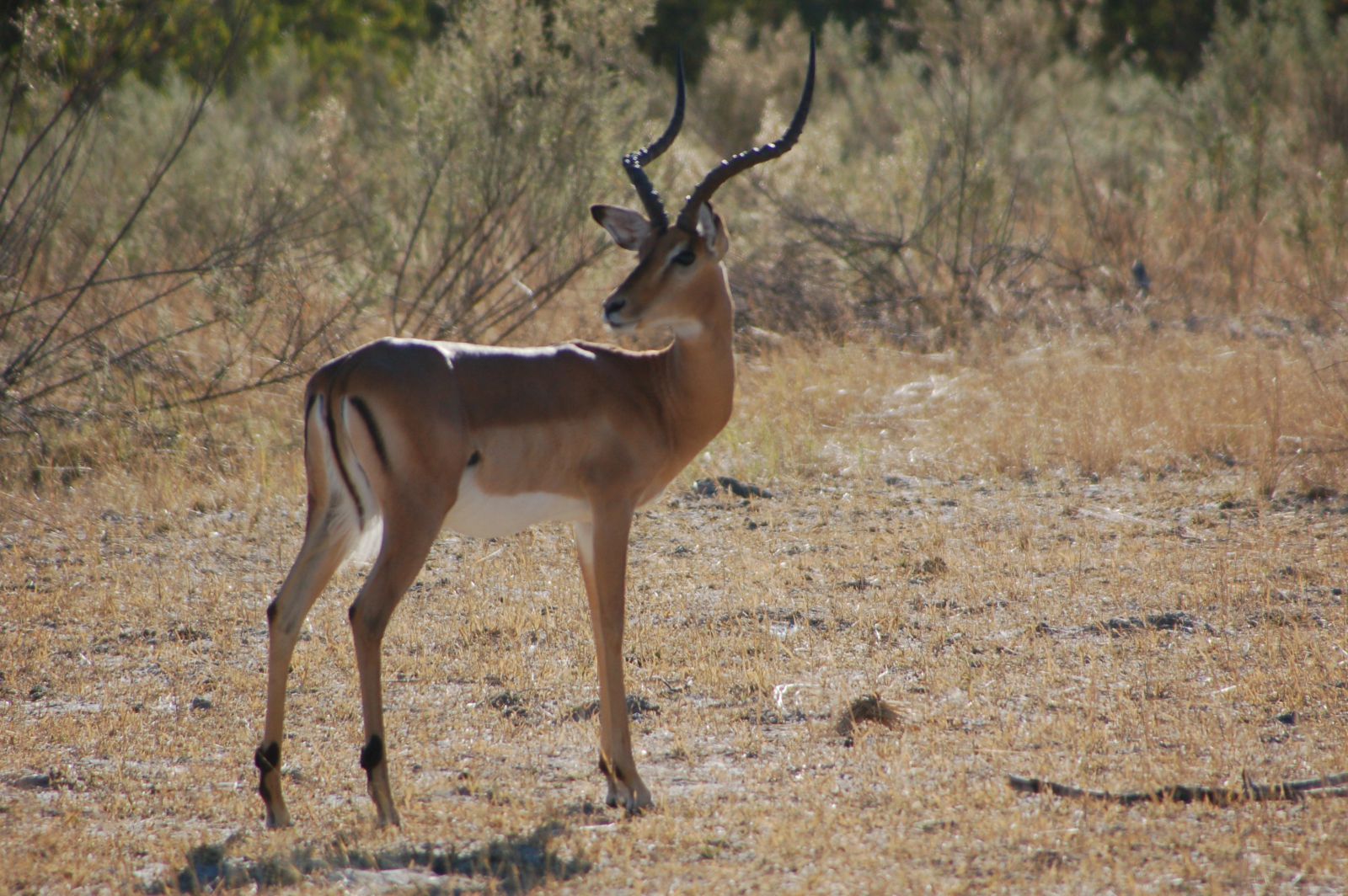 Habitat: Wooded savannahs, acacia savannahs, gallery-forests, bush. Impalas are partial to ecotones between savannah and woodland biomes. Vegetation cover is a requirement even when they frequent more open areas. They are also water dependent.

Food: A mixed-feeder which is both a grazer and browser depending on seasons and location. They also feed on fruits and pods. When it has the choice, impalas are predominantly grazers beeding on green grasses. They switch more to browse during the dry season. They are especially partial to acacia leaves, twigs but more than 46 different browse species have been recorded in their diet (Monro).

Behavior and social structure: Impalas' social structure is somewhat complex. The only common denominator is their highly gregarious habits. Herds of more than a hundred individuals are quite common. Doubts over the territoriality of impalas have often been raised. This due to the fact that males usually gather in vast bachelor herds of several dozens individuals composed of both subadults and dominant males which become territorial only during the rutting period. One distinguishes three types of social structure: territorial males during the rut, bachelor herds and reproductory herds. These bachelor herds are not stable and members can come and go as they please. Yet, a hiearchy exists based on size. Status is further asserted though a specific ritual where a male with lower status will sniff the skull of a dominant male between the horns where glands release a secretion providing information on the physiological status of the male. The dominant male will let himself be sniffed and even licked on the neck. This ritual reaffirms dominance and avoids potential fights between males. Bachelor herds may join female herds, especially during the rut During the rutting period, males become especially aggressive with one another and dominant males will display territorial and dominance behavior whereas they usually tolerant of other males outside of the rutting period.

During the rutting period, dominant males in bachelor herds will establish small-sized territoires through defecation and dung piles at strategic places. The territories are not resource-based but harem-based. Indeed, males will try to detain passing female herds on their territory which will become for temporary period like a harem with exclusive access for the territorial male.  Males will actively prevent female herds to leave their territory by chasing them and roaring. The roar is actually typical of the impala. It serves both to attract females who seem to bunch up on male territory when heard and a deterrent to competiting males. It is dominance marker. It indicates to the females the presence of a territory held by a dominant male in which they will be safe from other males attention and harassment. On the other hand, males of lesser status would usually flee when they hear a dominant male roar. The territorial male will usually chase all male intruders from his territory during the rut.

Territorial males indicate their dominance status through various postures and rituals, especially during the rutting period. It will usually wander through its territory with proud posture and straight and rapid gait exposing the length of his horns and the width of its neck which is a marker dominance.  They will also present their horns to potential intruders and horn-thrash surrounding vegetation. If dominance rituals fail between males of similar status, they will stand close to one another and will make a lateral display to expose their horns and neck.Ears are held back, tail clumped. Even though the two males face each other thew may turn their heads backwards. Simultaneously but nor always they may roar, yawn and horn the ground. If the intruding male stand his ground, a fight may ensue where both males will lock horn, neck twist and push each other in an attempt to make its opponent lose balance or gore it by breaking his parrying which might prove fatal. The rutting period is intense for males and can leave completely spent due to the intense competition between males and the energy spent to keep females within their territory.

Impalas reaffirm their social bonds through allogrooming which is the mutual grooming of one another to get rid of ticks and parasites. They are rather diurnal in habit spending most of their time foraging, chewing the cud and resting which may take as long as 18h per day (Estes). They feed rather early in the morning until 10 or 11 am before withdrawing in the shade to rest and chew the cud. They become active again from 3pm to 5 pm. They can also feed between 11pm and midnight.


Reproduction: A male will identify an oestrous female by its caracteristic squatting posture when it urinates, the position of its tail and through urine testing. When females enter a male's territory it will approach females in low-stretch posture, mouth slightly opened while flicking the tongue and by sniffing the females' rump. When an oestrous female is identified, he follows her while bleating and flicking the tongue and may run after he if she flees. When she stops, he licks her genitals and may raise on his hind legs and walk a few steps while in erection to proceed with mating.

Impalas may reproduce all year long but birth peaks can be identified at the begining of the rainy season where food is plentiful. Females reach sexual maturity at 18 months. Gestation lasts between 190 to 200 days. The mother Isolates to give birth and the young remains hidden in vegetation for a few days before following his mother back to the herd where he may join other calves in nursery herds. Young impalas are very playful.

Predators: All big predators prey on impala especially leopards, African wild dogs, cheetahs and to a lesser extent lions, hyenas, rock pythons and Nile crocodiles. Impalas can only escape their doom through flight. Young impalas are preyed on by jackals, honey badgers, small felids like serval and caracals, great raptors and baboons.When they see a predator they litterally explode in a flurry of jumps as high as 3m and as long as 11m in all directions to confuse predators. Although scattered, members will gather again thanks to the smell released by their metatarsal glands which enable individuals to locate each other in dense vegetation. This may be why impalas also indulge in their typical rocking high jump where their hind legs go almost vertical when they land on their joint forelegs as a bid to diffuse the smell enabling individuals to locate one another.

Best places to see: Especially easy to see in most parks and reserves except in the Ngorongoro and Queen Elizabeth NP (Uganda).