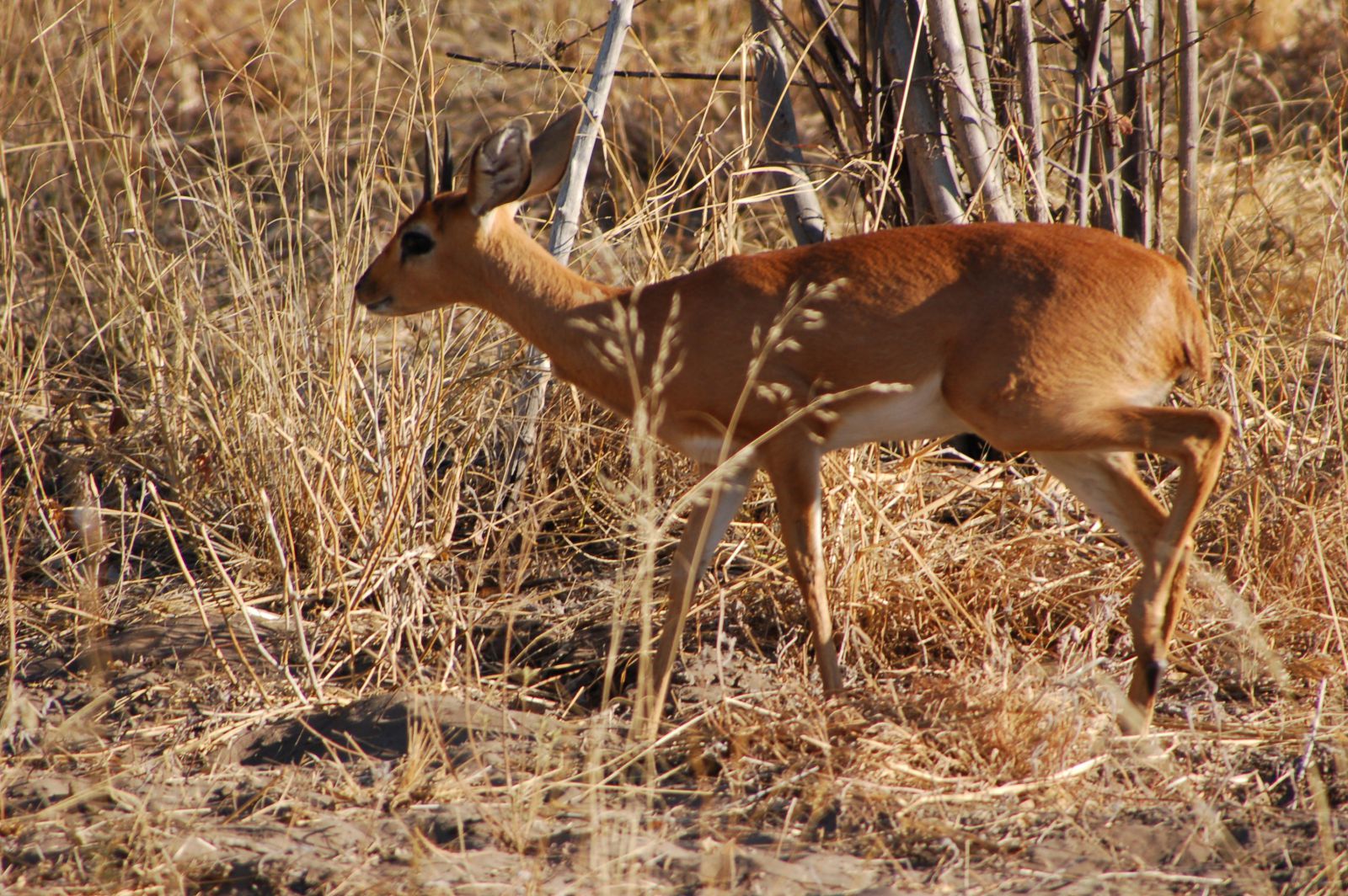 Habitat: Steenboks are partial to open country from semi-desert such as the Kalahari to mountain moors. However they are mostly found in arid and dry savannahs provided that there are enough patches of bushes, shrubs or high grasses where they can scurry for cover to hide from predators. They may be found in lightly wooded savannahs but avoid miombo, dense woodlands and short-grass plains and savannahs.

Food: Mostly a browser, steenboks feed on the most nutritious parts of plants, shrubs, bushes they can reach. They cannot browse higher than 1 meter above the ground. Forbs predominate in their diet, up to 70% according to studies. They also feed on shrubs, pods, seeds, and roots. They feed on grasses if nutritious and fresh enough. Geophagia has been reported in steenbok as it licks salt deposits found in the mud.

Behavior and social structure: Authors diverge on whether the steenkok lives solitary lives except when the female is in oestrous attended by a male or when the female is accompanied by calf (Skinner & Chimimba, du Toit) or if like dik-diks, steenboks form monogamous pairs defending a common territory against same-sex tresspassers (Estes). It actually seems that the later interpretation has some merits. It may be that steenboks form monogamous pairs but that because they forage and rest separately on their common territory it was wrongly assumed that they are solitary. In this respect, they would differ from dik-diks where the male and the female are always in each other's company for all daily activities.

However, and just like dik-diks, they are territorial and each sex defend their territory against tresspassers of the same sex.  Each sex has its own dung piles to mark their common territory. Both scrap the ground before and after urinating and defecating on their respective dung piles. They also use secretions produced by their preorbital glands to mark the stems of plants to delineate the borders of their common territory. It seems that border fights rarely escalate to physical fights and that dominance displays are sufficient to deter trespassers. Many unknown remains regarding the social and territorial behavior of steenboks.

Steenboks are rather nocturnal but may also be active during the day early morning and late afternoon. One third of their time is dedicated to foraging while the rest of the time is spent lying, resting and ruminating in the shade to serve energy.

Reproductive behavior: Sexual behavior is similar to other antelopes but simplified. The Male follows the female, licking her genitals and executing the laufschlag (lunge of the male's foreleg between the female hindlegs or to her abdomen) to prompt her to urinate to test her receptivity through the flehmen (the male curls his lip to allow the pheromones contained in the females's urine to reach the Jacoboson's organ enabling to determine the females readiness to mate).

The gestation period varies between 168 to 173 days. The calf stays hidden in the vegetation for three to four months before being able to follow its mother.

Best places to see it: Unpredicatable and skittish, it is often seen in the Savuti in Botswana or in the Kalahari desert.