The gemsbok is a member of the prestigious hippotragini tribe. It is very similar to the beisa oryx of Eastern Africa but the gemsok is slightly bigger and its range is limited to the arid zones of Southern Africa from the Namib desert to the Kalahari sands.

Gemsbok thanks to its physiological adaptations is able to withstand extreme heat of more than 45°C and can survive in hostile environment where water is scarce.

Some authors mention a subspecies which is the Angolan gemsbok (Oryx gazella blainei) which differs from the more typical Kalahari gemsbok by its thinner facial markings and its lighter coloration. The existence of this subspecies remains controversial. 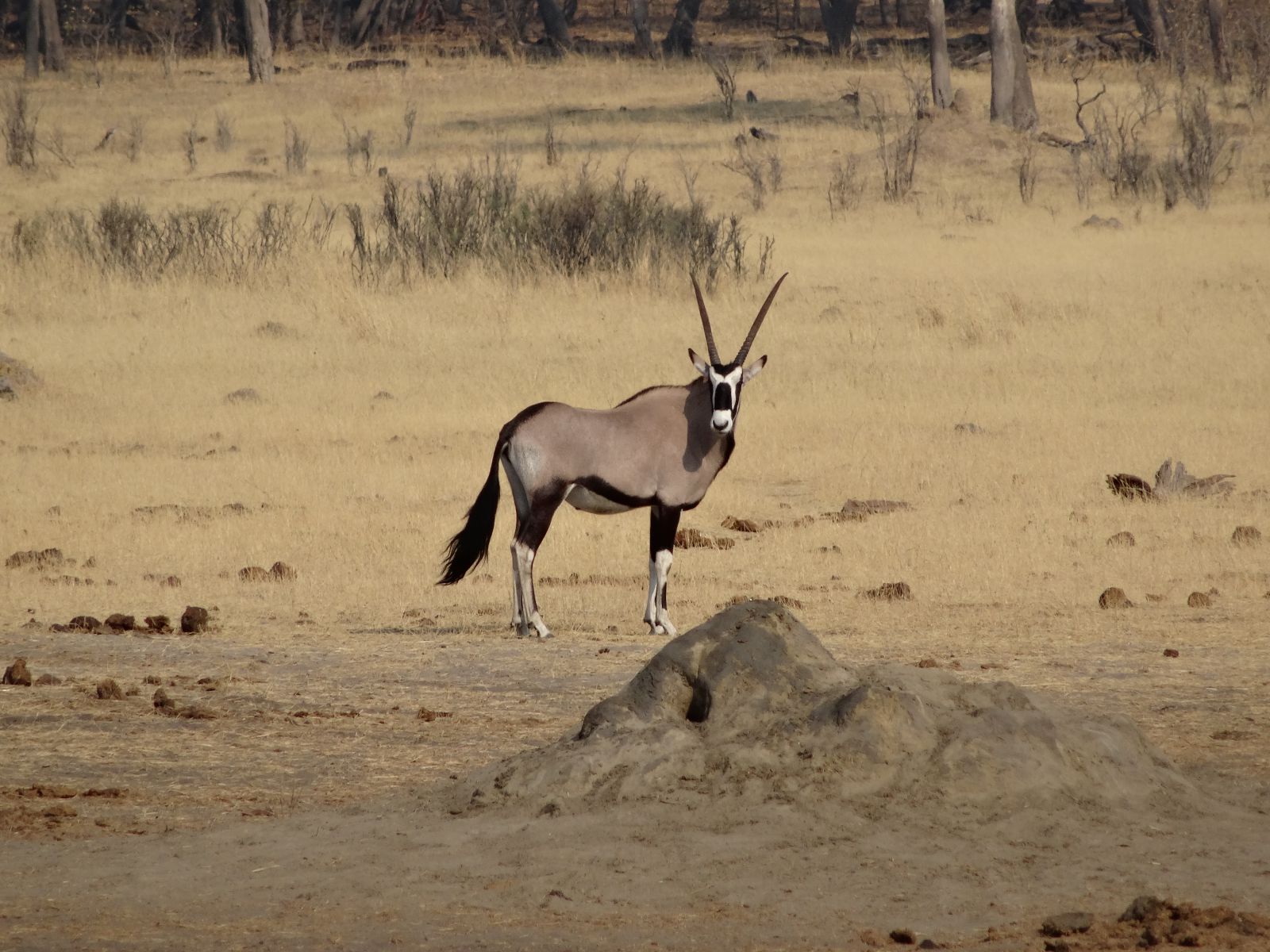 Habitat: Found mostly in open arid and semi-arid ecosystems of Southern Africa. It may be found as well in open savannahs and woodlands especially acacia woodlands. It is partial to dune fields, river beds and arid elevations.

Food: Mostly a grazer it browses occasionally during the dry season. It is partial to short and fibrous grasses. During the dry season it feeds on acacia pods, tsama melons and gemsbok cucumbers (A. naudinianus) which contribute to fulfill its water requirements. According to the zoologist Michael Knight, they avoid Schmidtia kalaharensis during the rainy season as it releases a chemical irritant. As with the beisa oryx, gemsbok can go without water for significant amount of time but can drink as much as 21 litres every five days when water is available (Knight). Gemsbok is also partial to salt licks to satisfy its mineral needs. Due to the hostile conditions in which it lives, the gemsbok saves energy during the day. It wanders an average of 10 km a day to forage (Knight).

Behavior and social structure: One can distinguish three different social structures: the mixed herd, the nursery herd and the solitary male. Generally, mixed herds have a dozen individuals but can also number several hundreds. Usually these are aggregations of smaller herds gathering during the rainy season. Mixed herds are structured around the same lines as the beisa oryx and the same developments can be made here. Mixed herds are nomadic are led by a dominant female which control the movements of the herd. They are also led by a dominant reproducting male whose status is superior to any female. Non-reproducting and non-territorial males have an inferior status to all females in the herd. Hierarchy is lienar and based on age and time spent in the herd.

It seems that the gemsbok is slightly more sedentary than the beisa oryx. Dominant males are territorial. They mark their territory with dung piles located in the vicinity of conspicuous landmarks at the periphery of the territory. They use a specific defecating crouch posture to do so so. As with the beisa oryx, they use the same dominance postures and their fighting style is similar.

One of the most typical dominance postures is the erect and lateral posture where the dominant male slightly turns its face in the opposite direction of his opponent thus pointing the tips of its horns in his direction. It can also hold its horns high while nodding its head every now and then. The subordinate male usually responds with a head-low posture. Fights are rare and spectacular. They usually occur between dominant males fighting for an oestrous female or to access a waterhole. In this scenario, males fight by lowering their heads and by clashing the base of their horns or they may try to strike diagonal downward blows with the front face of their horns. They can also stand in reverse paralell and try to stab each other by lunging backward with their horns at their opponent over their shoulder. Despite the highly dangerous horns, fatal issues remain rare. Territorial males usually try to retain mixed herds and nursery herds on their territory. They tolerate other males provided that they act submissively. Non-territorial males usually give territorial males a wide berth.

Reproductive behavior: Oryx breed all year long. Gestation period is around 255 days in length. The female is sexually mature around 1,5 to 2 years. The courtship is almost similar to other antelopes except in the approach phase. The male circles the female in erect posture while she is in head-low posture. The female rarely let the male approach her frontally and may chase it. It eventually lets the male approach and it will then squat and urinate. The male will test the female's receptivity through flehmen (male tests the female's urine through its nostrils and makes a face to let the molecules contained in the urine hit the Jacobson's organ located in its palate). If the female is receptive, the male executes the laufschlag (lunge with the front paw to the female's back paws) and mounts.

The calf is weaned after four months. It spends the first weeks after parturition hidden and motionless in thick vegetation. It is visited by its mother 2 to 3 times a week in order to suckle. Once weaned, it joins the herd with his mother. After a few months, the young males join juvenile herds while females stay with their mother in the herd.

Predators: Lions, spotted hyenas and packs of wild dogs are the adults' main predators. Gus Mills studies in the Kalahari have shown that a group of 4 spotted hyenas are needed in average to successfully take down an adult gemsbok. Although gemsboks usually flee to escape predators, they will fight valliantly once cornered, their horns associated to their bulk and power proving deadly. If cornered by several hyenas or African wild dogs, it will lean into a thorny bush to protect its vulnerable backside and flanks and face off its opponents with its deadly horns.

If a leopard is more than capable to take down an adult gemsbok, the risk is not worth it. It is exceptional for a leopard to tackle an adult gemsbok unless the leopard is starving or the gemsbok is in poor condition. Leopards usually kill subadult or calves which are less risky to take down. The same goes for cheetah whether they are male coalitions or solitary hunters. The studies of Gus Mills in the Kalahari have shown that cheetah male coalitions of only two members are able to take down sub-adult gemsboks.

Calves are preyed on by all major African carnivores including brown hyena and jackals.

Best places to see it: Namibia is the gemsbok's stronghold. They are found in the Namib desert and around Etosha pans. Gemsboks are also numerous in the Kalahari in Botswana and northern South Africa. You can exceptionnally see it in Hwange in Zimbabwe which forms the northernmost limit of of its range.