The mountain nyala is a member of the tragelaphini tribe of antelopes (spiral-horned antelopes) which looks more like a greater kudu in size and horns' shape than a lowland nyala. The montain nyala is endemic to the Bale mountains in Ethiopia. It is thus a very rare antelope. Similarly to other members of the tragelaphini tribe, sexual dimophism is quite important with the male being considerably bigger than the female and the only to sport horns. 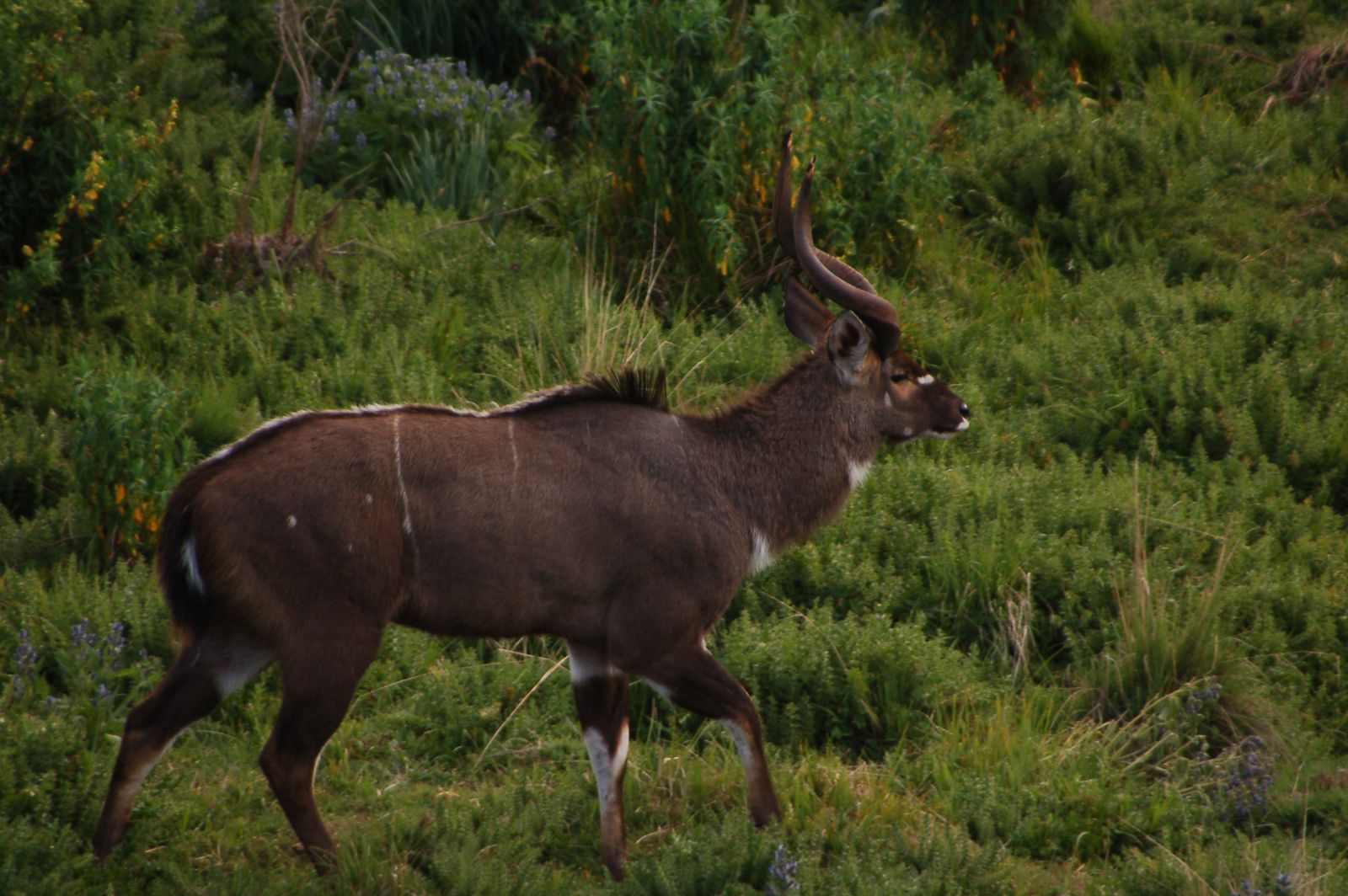 Habitat: Partial to montane forests and woodlands up to 4300 m high, it may also be found in valleys and in alpine meadows or at their border.

Food: A browser mostly feeding on the foliage of shrubs, bushes and various tree species. It can also feed on green grasses during the rainy season but also on fern, lichen and aquatic plants.

Social behavior: The basic social structure is that of an adult female and her calf or young from last year. Several adult females and their calves can gather temporarily in small herds numbering 5-6 individuals but also several dozens if ecological factors (food abundance) allow it. Males and females evolve within their respective home ranges. Males home ranges which average 15-20 km2 are bigger than those of females.

Males are not territorial and form bachelor herds within which a hierarchy based on age and size exists but rituals to establish dominance. Among dominance rituals, lateral display with dorsal crest erected to emphasize size and horns length is probably the most common. Younger males can also engagein horn-sparring matches. Older males tend to be solitary.

Males join small female herds when one or several are in oestrous and then form temporary mixed herds during the rutting season. It is at this period that males may compete with one another. If they are evenly matched in terms of size and strength, they then go through a dominance ritual where both contestants execute a circling dominance lateral display, head and neck in low-stretch posture, dorsal crest and tail erecte until the weaker one surrenders and flees. When this is not enough, the two males may lock horns and fight. Fights are usually short affairs and remain extremely rare.

Reproduction: Once rid of rivals, the male follows the female to test her urine through flehmen to determine her receptivity. Mountain nyalas reproduce all year long. Gestion is 8 to 9 months long. Parturition occurs in a secluded place and the calf remains hidden in vegetation for several weeks before it can follow its mother.

Predators: Leopards and spotted hyenas prey on both adults and youngs. They are the only big predators remaining in relative numbers in the region. Lions used to prey on nyalas when they were still present but it is possible that the small lion population of the Harenna forest in the foothills of the Bale Mountains may occasionally feed on mountain nyalas. Ethiopian wolves are not powerful enough to tackle adults but have been recorded preying on young mountain nyalas like jackals.

Best places to see it: Endemic to Ethiopian highlands; mountain nyala is found exclusively in the Bale Mountains where it is quite common and easily approachable on foot.