The reedbuck is a mid-sized antelope which belongs to the reduncini tribe (antelopes of wetlands). There are three species: the common reedbuck, the bohor reedbuck and the mountain reedbuck. Apart from their different coat patterns, the three species have more or less the same biology except for the mountain reebuck which seems more gragarious than the other two.

All species have a subauricular gland emitting a secretion used to identify and locate individuals in tall grass habitat during the rut. 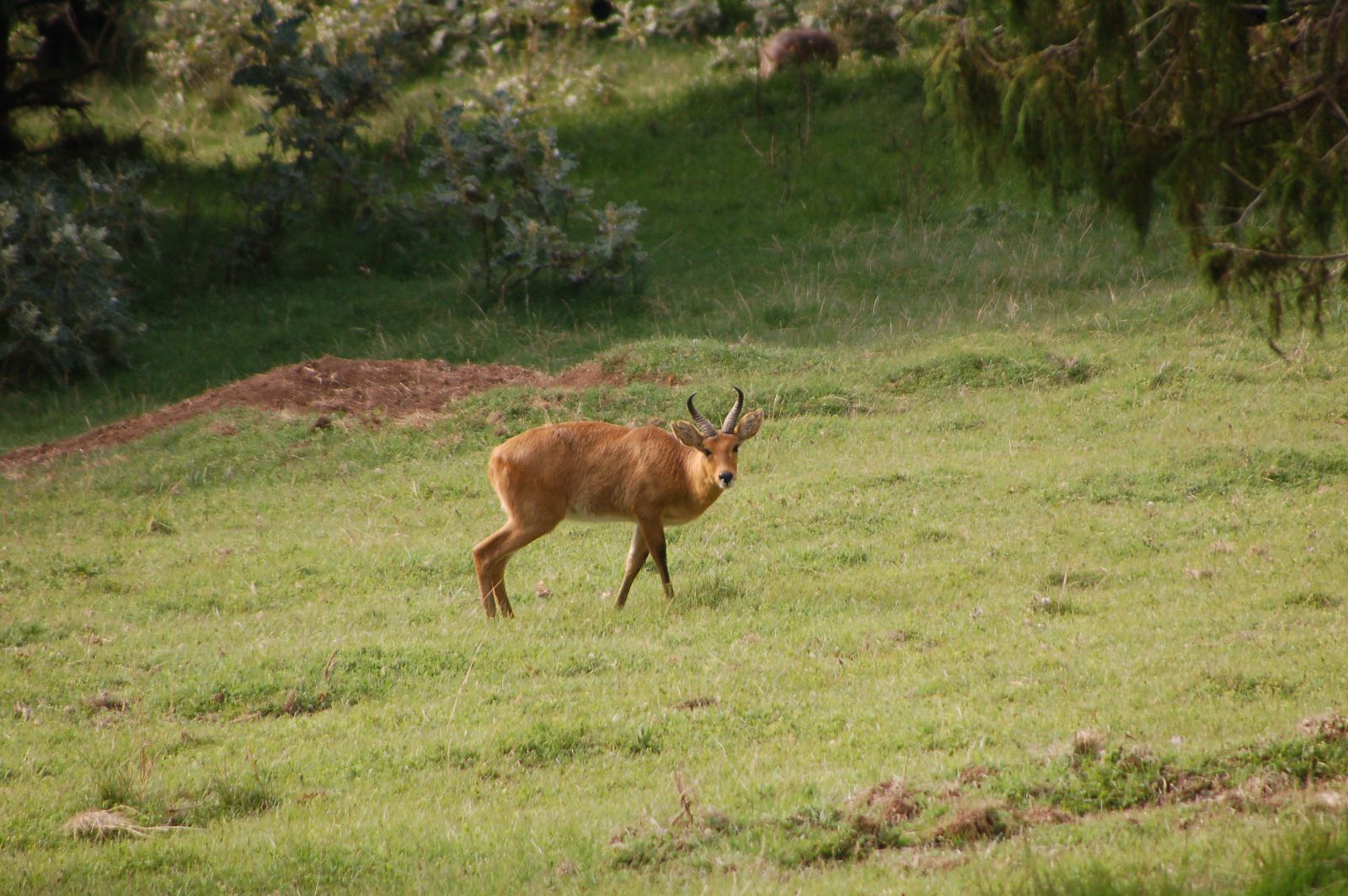 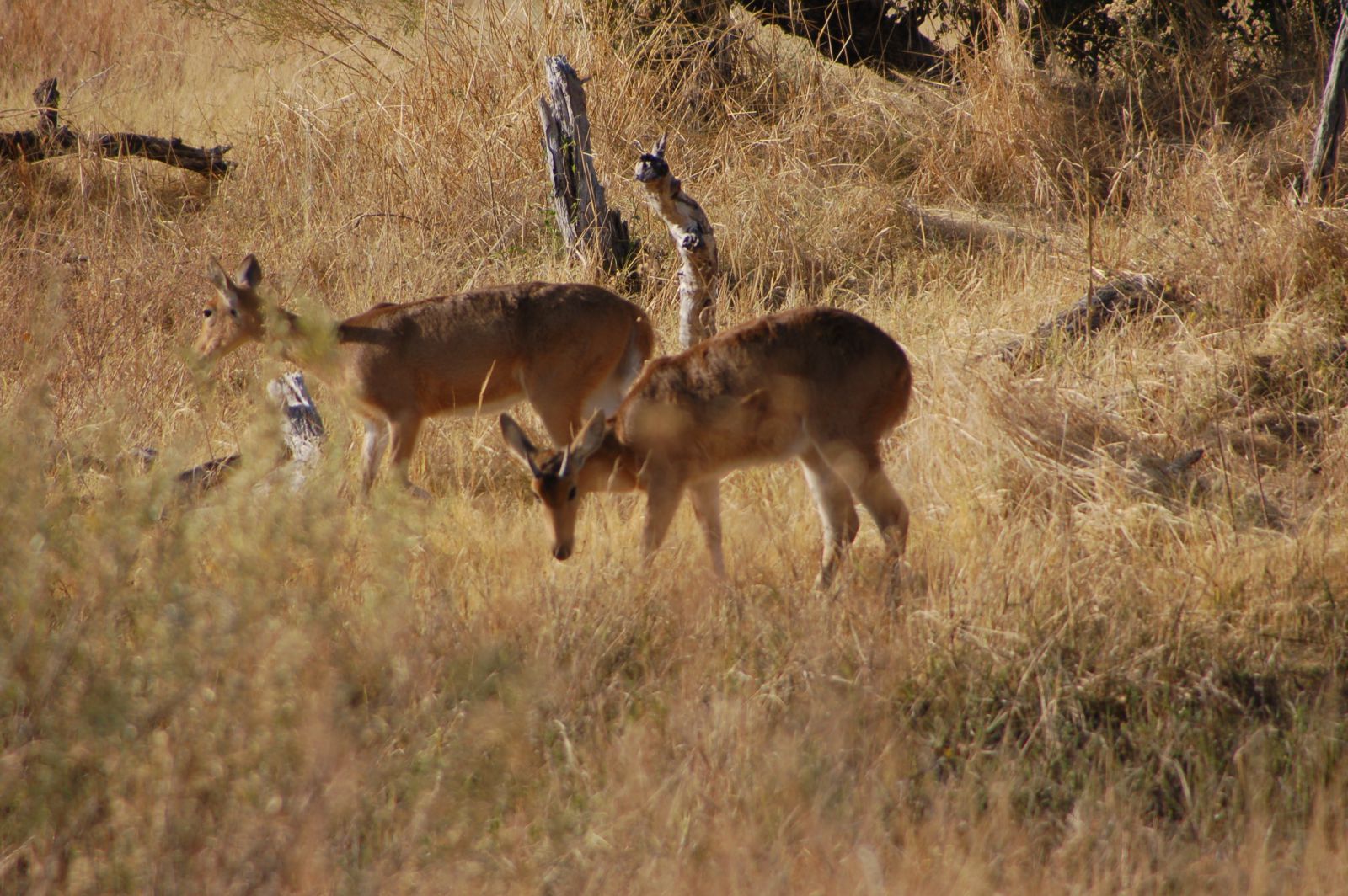 Habitat: Partial to patches of high grasses in the vicinity of water, floodplains, wet savannahs, open areas close to a permanent source of water provided that vegetation is high enough to conceal them.

Social behavior: Reedbucks social structure is at the crossroads between those of  solitary forest antelopes and those of gregarious plain antelope species. The basic social structures is that of a monogamous pair with or withour youngs. This social structure is prevalent especially when vegetation cover allosws it. Generally, a pair of reedbucks will establish its territory in patch of high grasses in the vicinity of a permanent source of water. However, should the vegetation cover disappears due to seasonal changes or fires, reedbucks may thus gather temporarily in open grounds. The monogamous pair is territorial. Even when environmental circumstances force reedbucks to gather in the open males wil reduce their territory and give each other a wide berth. This setting is prevalent with the southern or common reedbuck.

It seems the bohor reedbuck is somewhat more gregarious with a more flexible social structure. Females occupy overlapping home ranges where they live in small groups of up to 5 individuals including their young ones. Males establish territories which can encompass several female herds' home ranges. Non-territorial males live in bachelor herds on the fringes which can gather as much as two dozens indivividuals. Territorial patterns and set up may collapse under specific circumstances such as very high reedbuck aggregations like in the Sudd in South Sudan.


Male's territorial behavior is similar to that found in other males bovids. Male reedbucks adopt the erect standing posture on a conspicuous landmark within their territory in typical topi fashion. When a rival appraoches, it whistles and rushes towards it by strotting. It will then threatens the intruder in medial horn-threat presentation. If the intruder does not take the cue, it may escalte in full fight horns against horns. Fights may prove lethal. R.D. Estes reports that one third of recorded deaths for male reedbucks are the results of fights. It seems that males defend more access to females present in their territory than the surface or the resources present on the territory. More often than not, non-territorial males may be tolerated if they show submissin and do not attempt to mate with the females.

Reproduction: Reebucks reproduce all year long. Male approaches the female in low-stretch posture while licking or not its rump or genitals. She will answer by squatting to urinate enabling the male to test her receptivity. Male may effectuate the laufschlag before mounting. Gestation lasts seven months and a half. The calf lies in cover for the first month following birth. The mother visits it once a day to enable him to suckle. The young follows the mother after three months. They are eventually chased by the territorial male once they reach puberty.

Predators: Lions, leopards, cheetahs, spotted hyenas, wild dogs, crocodiles and pythons all prey on adult reedbucks. A YouTube video shows all the dangers that a reedbuck has to face. You can see a female reedbuck falling into a stream after being chased by a cheetah where she is eventually devoured by a crocodile. The cheetah himself falls into the water where he is seized by a crocodile but manages to escape after a titanic struggle. Jackals, honey badgers, baboons and raptors may prey on calves. When confronted by a predator, reedbucks react like forest antelopes such as the bushbuck or duikers by freezing and concealing themselves in vegetation. They can also lie down on the ground. If the predators approaches to closely they will dive in nearby vegetation.

Best places to see it: Reedbucks are not so easy to see even in reserves where they are numerous. This may be due to their nocturnal habits and preference for tall grasses where they can conceal themselves. The Serengeti in Tanzania and Moremi Game Reserve in Botswana are probably the best places to see them.