The topi is a member of the alcelaphini family just like the wildebeest and the hartebeest. Just like them, the topi has a narrow head, a sloping head and is adapted to life in the grasslands. As with hartebeest, several subspecies may be distinguished all over Subsaharan Africa. The biggest subpsecies with the longest horns is the korrigum (Damaliscus korrigum). It is very rare and threatened with only a few thousands remaining over six countries of Western Africa: Benin, Burkina Faso, Cameroon, Ghana, Niger and Nigeria. The tiang (Damaliscus tiang) is also one of the biggest subspecies widespread over Central and Eastern Africa including the Central African Republic, Chad, Ethiopia, Sudan and especially South Sudan where there is a spectacular migration in the Sudd floodplains. It has a reddish/orange coat with purple hues. The Uganda topi (Damaliscus ugandae) has much darker coat. It is found in Uganda, the Democratic Republic of the Congo and Rwanda. The Ruaha topi (Damaliscus eurus) is a very similar in apperance but the coat is not as dark. It is found in the Lake Rukwa ecosystem and in the Ruaha in Southern Tanzania. The Serengeti Topi (Damaliscus jimela) is probably the best known of all subspecies among safari goers as it is the one found in the Mara-Serengeti ecosystem in Kenya and Tanzania. It is the smallest subspecies with a reddish coat and dark purple patches on the shoulders and legs. The Coastal topi (Damaliscus topi) is a rare suspecies found in the costs of the Indian Ocean in Kenya and Somalia. It is extremely threatened. Its apperance is similar to that of the Serengeti topi except that its dark purple markings are not as clearly delineated.

Southern Africa has also its own version of the topi in a subspecies called the sassaby (Damaliscus lunatus). It is one of the biggest subspecies but its horns are shorter than in Eastern or Western African topis and they spread laterally in a lyra shaped way whereas those of Eastern and Western topis have an S-shape and point backwards. The tsessebe is found in Angola, Zambia, Namibia and Zimbabwe. Its coat is somewhat similar to that of the Serengeti topi. A darker version of the tsessebe is the Bangweulu tsessebe found in the eponymous marshes in Zambia. All these subspecies have similar habits and behavior and only diverge slightly in their overall apperance.

Focus will be put on tsessebe and the Serengeti topi which are the subspecies most likely to be encountered on a safari. 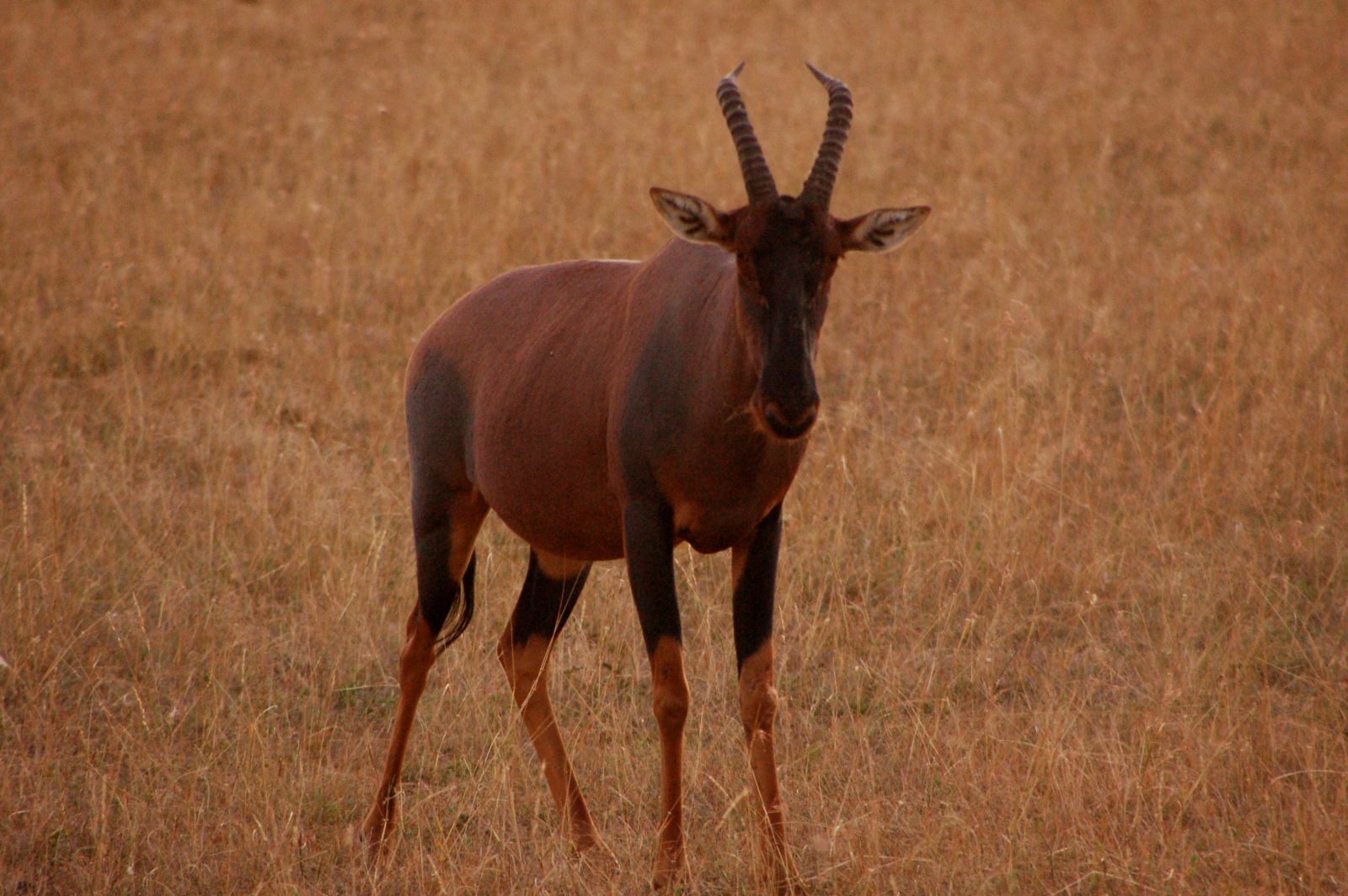 Habitat : Topis are usually considered as open habitat dwellers. They may be found from treeless grasslands, savannahs and savannah woodlands but also ecotones between savannah and forests. Some subspecies such as the tiang, the Uganda topi, the Bangweulu tsessebe and the Ruaha topi are found in floodplains.

Food: A strict grazer. Topis feed almost exclusively on grasses up to 99% especiall mid-height grasses (up to the knee) contrary to the wildebeest who feeds and short grasses. This allows to mitigate competition between the two species. The narrow muzzle of the damaliscus shows that it is highly selective in its dietary choices only selection the most nutritious parts of the grasses it feeds on avoiding stems and leaves. It it not a bulk feeder like the wildebeest or the zebra. It usually tries to drink daily.


Behavior and social structure: Like wildebeests and hartebeests, topi and tsessebe are highly gregarious. Their social structure will vary depending on the habitat in which they live. In closed habitats, such as wooded savannahs, woodlands, and ecotones (savannah/woodland), topi populations are more scattered and small. Under this configuration, topis tend to be more sedentary  and form resource based territories. Females and young form small herd of less than dozen inviduals and settle on a male's territory who will have exclusive access to the females on his territory forming a harem. The females will take an active part in the defense of the territory. They will deter strange females and young to enter the territory. Males and females mark the territory by using their preorbital glands where they will insert the stem of surrounding vegetation to deposit the dark secretion produced contained within the glands. They will also kneel to rub their heads and horns the ground and cake it with mud and earth and then shake heir heads vigorously. Mud or earth will be wiped on their body making them look more impressive. The territorial male will also make his presence conspicuous by standing in erect posture on high ground or termite mount on his territory. He will prevent any intruding male to trespass by meeting him while cavorting and then make the lateral display barring him to step further. It may also horn-sweep at the same time. If these intimidation displays fall short of their purpose, a fight may degenerate where the contestants rush on one another sometimes rearing up and ram each other using their horns and foreheads to absorb the impact before falling on their knees and locking horns trying to push each other interspesed with neck twisting. The winner chases away the loser.

In more open habitats, only the male will defend a territory through which nursery herds of females and young go through. The male will then try to detain them in their territory in the hope to mate with some receptive females just like wilde beests.

In floodplains where topis are in very high densities and constantly migrating, small territories will be established as soon as the migrating herd stops to feed or rest. These territories are very small and males stand very close to one another. In these circumstances leks may be also established to avoid too stringent competition between males. Leks are basically mating arenas composed of a network of very small territories held by the most vigorous and dominant males. In leks, males are 50 m apart from one another or even less. Leks are wholly devoted to reproduction. Females and young gather around the lek, they may be as much as severa hundreds. Oestrous females will enter the lek to mate. Territories are also established by males who could not get a slot in the lek in the hope that females wandering in and out from the lek will stop in their territory. At the periphery or territories, bachelor herds of non-territorial males will form.

Topis may be active day and night. They usually forage early in the morning up to 9 am and late in the afternoon until dusk. The rest of the time is devoted to resting and  chewing the cud.

Predators: Lions and spotted hyenas are the topis main and most usual predators. One single spotted hyena is powerful enough to pull down a full grown topi. In the Masai Mara, spotted hyenas have become adept topi hunters and have the most unique strategy. When a lone hyena spots a resting topi, it will close the distance without being seen, a few meters away it will rush suddenly while the topi is still lying and grabs it. If the rush is successful, it will hold the topi firmly in its jaws, wearing it down until it dies. Sometimes other hyenas may help to dispatch the topi quicker. Packs of wild dogs and coalition of male cheetahs are also regularly prey on adult topis whereas predation by single cheetahs or leopards is seldom as they prefer subadults and young which are easier to catch.

Topis are defenseless against large predators despite their size and usually flee to escape predators although a mother will defend its calf against a lone hyena, cheetah, or jackals. Because of their high speed which may reach 80 km/h making them one of the fastest antelopes and their low densities compaired to wildebeests and zebras, topis do not appear prominently in the diest of large predators. Young are on the contrary heavily preyed upon by all large felids, hyenas, jackals, great raptors, honey badgers, caracals, Seba pythons. Crocodiles alre also always a threat to both adults and youngs when they come to drink.

Best places to see it: The great plains of Eastern Africa are the best place to see them especially in the Masai Mara and  the Serengeti where you can't miss them. In Southern Africa, they are somewhat scarcer as populations are more scattered and in less numbers.