The Grant's gazelle is well adapted to its arid environment thanks to its thermic regulation system similar to that of the eland and oryx. The blood is cooled by a cooling system located in the nostrils. This sytem ensures that the brain temperature is always lower than the maximum body temparature. 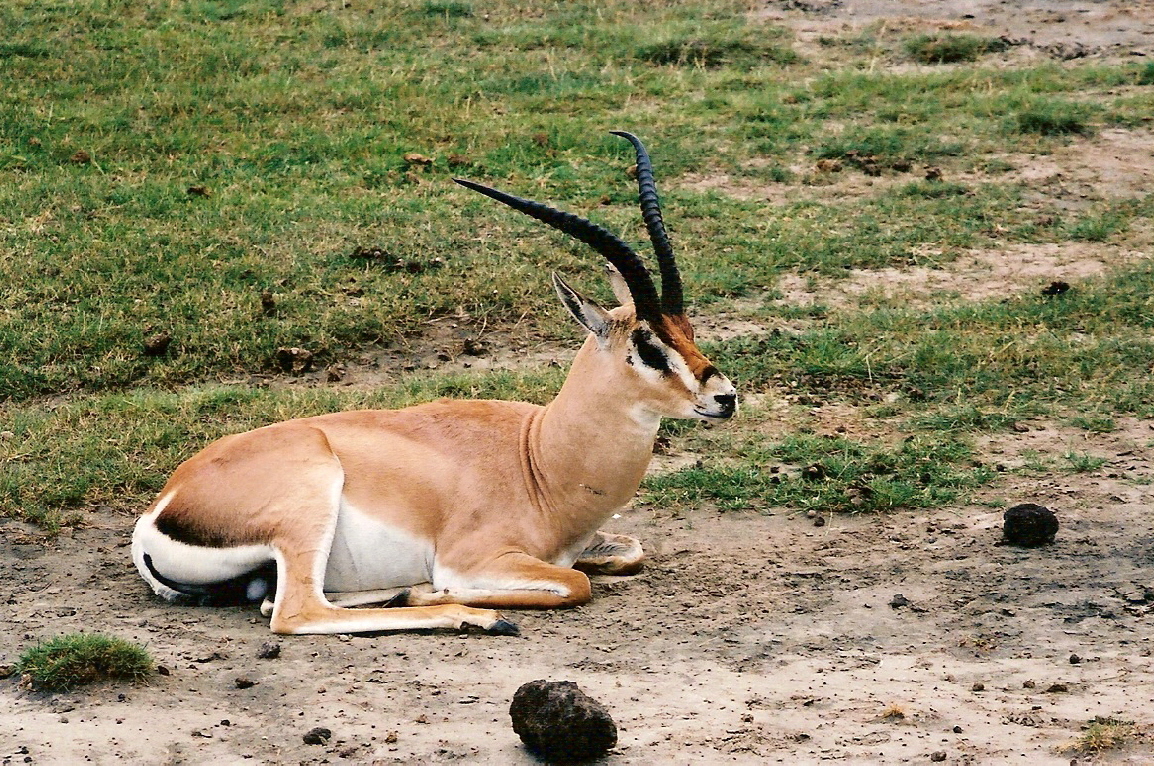 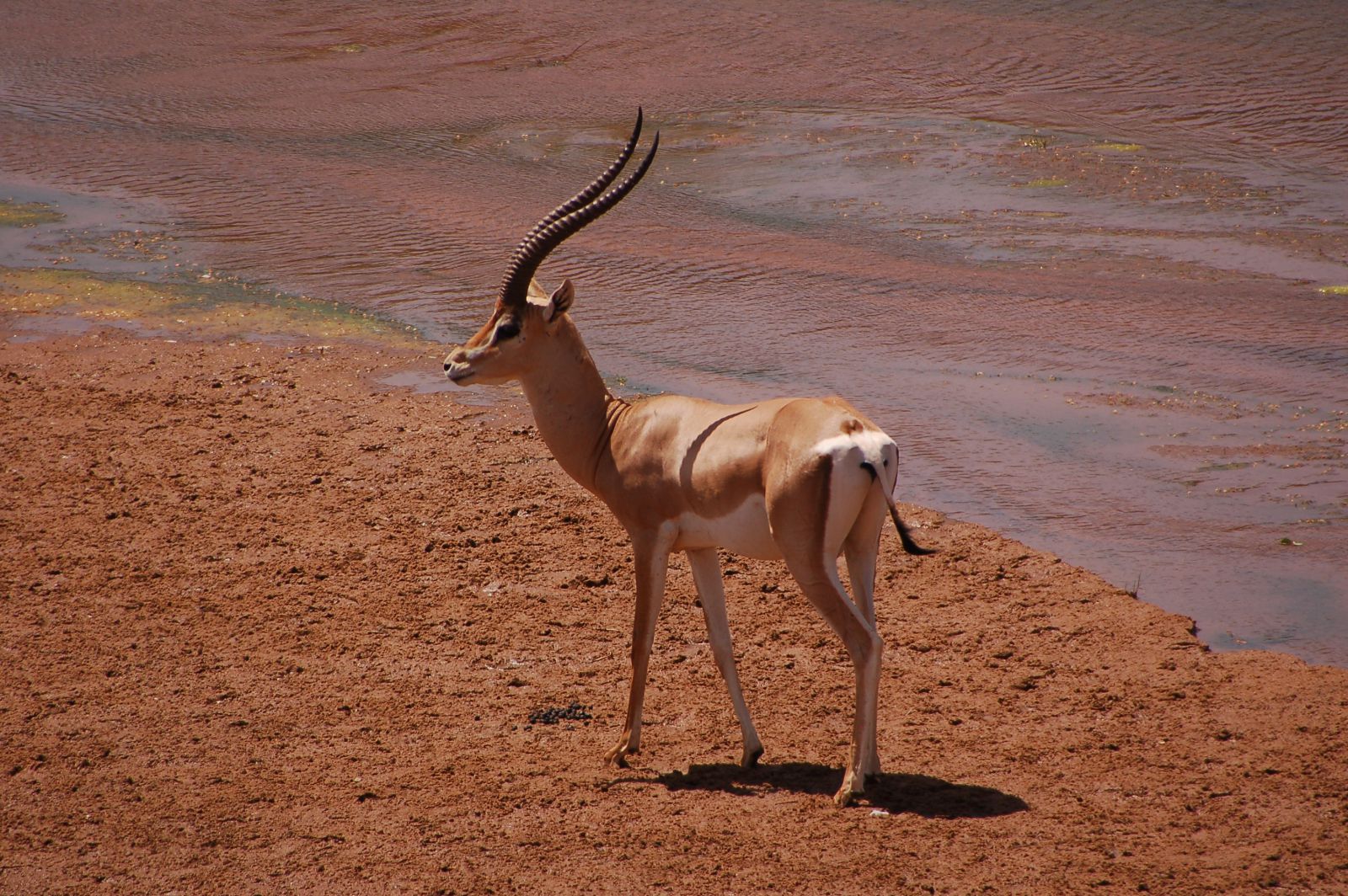 Feeding ecology: Intermediate feeder being both a grazer and browser. It feeds on diverse short grass species (Cynodon) and tender shoots during the rainy season when grasses are at their most nutritious. It turns to browse during the dry season especially leaves from shrubs.

Behavior: A gregarious species. As Estes observed, its social structure evolves depending on ecological and environmental factors. One may distinguish between mixed herds, breeding herds, bachelor herds, and territorial solitary males. Mixed groups with dozens of individuals including adult males, females and young are found mostly in open habitats where food is plentiful and where they regroup around a conspicuous landmark like a kopje or a tree. In wooded areas, mixed groups are either smaller or take the form of a breeding herd composed of a territorial male and a harem of females with young.

Habitat will have an influence on territorial behavior. Whereas males are more tolerant of one another in large aggregations on open plains, there won't tolerate intrusion from another male on their territory in a wooded environment. This may be explained by the fact that in large mixed herds, it would way too exhausting for a single territorial male to defend its patch in mixed group densely male populated. Large aggregations of mixed herds of Grant's gazelles may find their cause by the abundance of forage in a given spot prompting several herds to gather and mix. Mixed groups are also found during migratory periods. Grant's gazelle migration is in reverse order of those of Thompson's gazelles, wildebeests, zebras and topis. Whereas the later follow the rains synonymous with greener pastures, Grant's gazelles seek the driest zones with sparse vegetation where they will avoid competition from larger herbivores.

Breeding herds are sedentary and are composed of a territorial male and a harem of females. According to Walther, the individuals in these groups stay together up to a period of 8 months. Females may depart if the herd is too small as bigger herds offer them increased security.

Bachelor herds live at the periphery of territories and mixed groups are composed mostly of adolescent and adult males. Hierachy is based on seniority. Around 3, males leave their herd and try to establish their own territory.

Territorial males mark their territories with dung mittens strategically places and by urinating while scrapping the ground simultaneously. Males may also thrash vegetation or stand erect in the middle of their territory to advertise territoriality. Contrary to Thompson's gazelles, they do not use their preorbital glands to mark vegetation. They have a unique ritualized territorial display system among antelopes wh as emphasized by Estes. When territorial males meet, they stand laterall facing in the opposite direction and subsequently turn their head from side to side to emphasize their size, horns and large size of their neck which is a marker of masculinity for Grant's gazelles. This ritual display is usually enough to avoid fight but should it go further the males will switch to a medial-horn presentation before engaging the fight horns against horns or forehead against forehead. The weaker one eventually disengages pursued by the victor.

Reproduction: Grant's gazelle give birth along the year but with peaks October-December. They are sexually mature around 420 to 450 days. Males approach females in the erect march and posture. Females either flee or threaten them through a medial-horn presentation. When receptive they hold their tails in the air.

Females leave the herd to give birth. The calf stay hidden in the vegetation in the first weeks. It is visited daily by the mother to suckle. The later will bobb its head and bleat to call its fawn. After a few weeks, the fawn will join the mother and the herd.

Predators: Cheetahs, leopards, lions, spotted hyenas, African wild dogs and crocodiles all prey on Grant's gazelles. However, the Grant's gazelle is extremely difficult to catch and fast predators that rely on speed like the cheetah and the African wild dog which combines speed and stamina are the one that it fears the most as they are more likely to catch up to it on open ground. A gazelle may let slower predators like lions, leopards and hyenas come close on open terrain but will run away if they see a cheetah or wild dogs come within 500m. Fawns may fall prey to caracals, servals, jackals, honey badgers, baboons and raptors

Best places to see it: Grant's gazelles are easy to spot and numerous in the East African grasslands especially in the Masai Mara and Samburu in Kenya, in the Serengeti and the Ngorongoro in Tanzania. They are less common in southern Tanzania and harder to see in Ruaha.