The oryx is desert dwelling antelope adapted to arid and dry landscapes with distinctive long, straight and sharp horns. It is a close relative of the gemsbok which is slightly bigger. Beisa oryx is found primarily in Eastern Africa. it is a member of the hippotragini just like the roan and the sable. Like most desert adapted antelopes, oryx has an internal temperature regulation system which keeps its brain a few degress colder than its maximum body temperature. A cooling system located in its nostrils cools the blood before it gets to the brain. Its temperature can rise to 45° whereas 42° is lethal for most mammals.

Beisa oryx should not be confused with its close relative the fringe-eared oryx (Oryx callotis) which used to be considered as subspecies but which is now considered as monotypic. The fringed-eared oryx is found dry areas south of the Tana river in Kenya (Tsavo) and Northern tanzania (from Mkomazi to the arid plains of Salei in Eastern Serengeti). It differs from the beisa by the tufts of hair on its ears and its darker coloration. 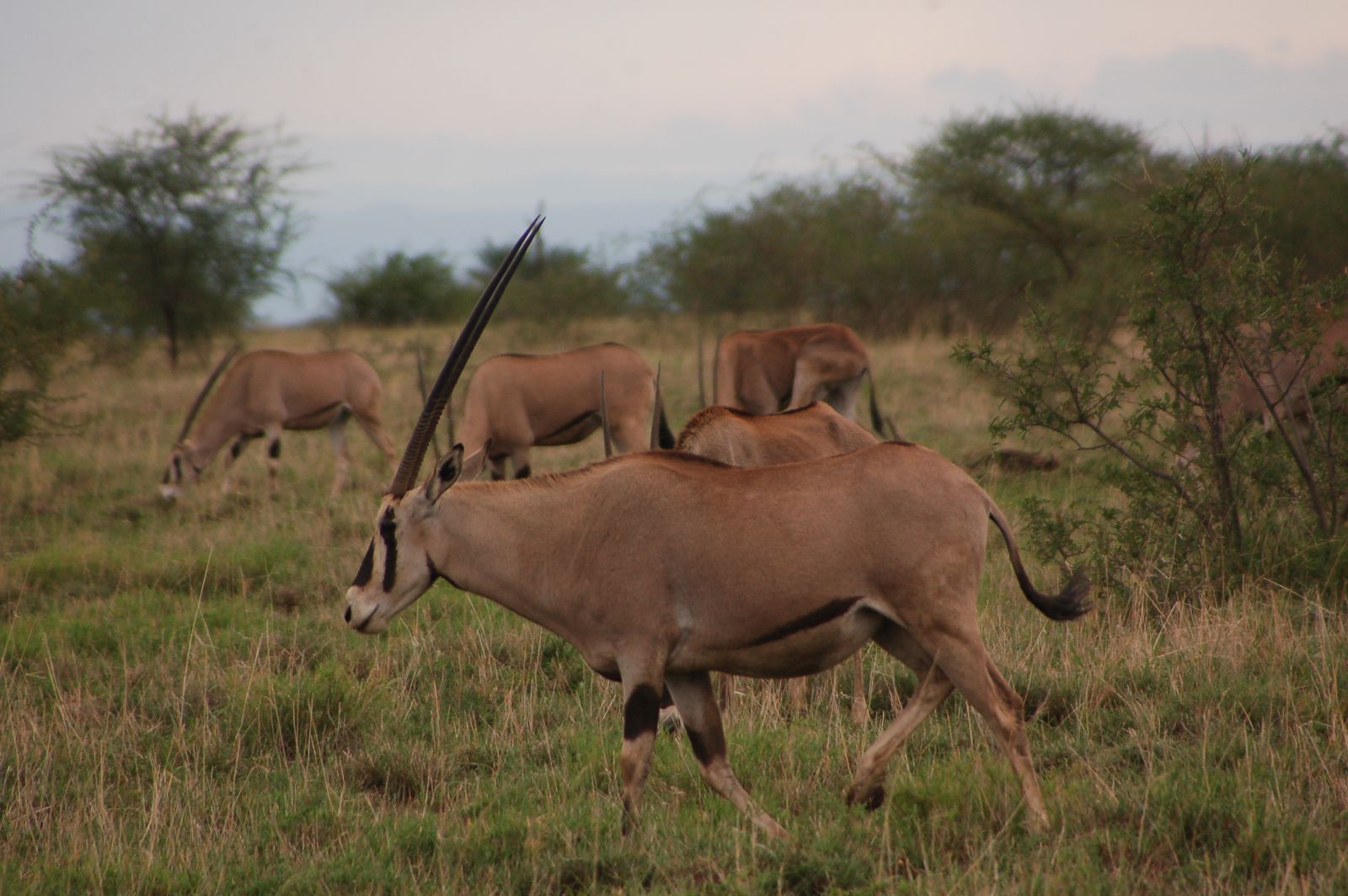 Habitat: Perfectly adapted to desert conditions, the beisa oryx dwells in the most arid regions of Eastern Africa. It can be found in rocky plains and waterless areas but also in savannahs and more especially thorny and bushy arid savannahs. It usually avoids high grasses.

Food: An electic grazer which feeds on coarse short grasses. It is however partial to green shoots with high levels of proteins but can also sustain itself with dry grass. It browses as well with a preference for acacia leaves and bushes. Roots and fruits like water melons are also consummed. It can go without water for a very long time. According to the zoologist R.D. Estes, the oryx only needs three liters of water per 100 kg per day.

Social behavior: The beisa oryx is a gregarious species with a flexible social structure which may be partly explained by its preference for dry areas with few feeding resources forcing to roam wide. Several social structures can be distinguished.

The most common are the mixed herds comprising between 20 to 60 individuals. A linear hierarchy exists among both sex based on age and length of time spent within the herd. There is usually an alpha male leading the mixed herd who dominates not only the other males but also all females. The alpha male usually occupies the rear of the herd and coordinates movements of the herd. There is also a leading female found at the front of the herd who dominates all males but the alpha male and all females. Non reproductive males in mixed herds -which are basically all males excluding the alpha male- also have an inferior status than females. Mixed herds are more or less stables. Migrant females trying to join the herd are usually rejected whereas foreign males are more likely to be accepted. Strangely, mixed herds do not hold much young which form nursery herds similarly to Cape eland youngsters.

Outside of mixed herds which are usually migratory, one finds also the more classical antelope social structure centered around a few females and their young led by a territorial male. These reproductive and resident herds are smaller and are usually found in more mesic areas with a permanent waterhole. The territorial male marks his territory through a defecating crouch forming dung piles specific to the oryx and which is also found in the addax. It may happen that mixed herds comprising several males and an alpha male cross the territory of a solitary territorial male. In this hypothesis, most encounters remain peaceful especially if there are no oestrous females. It seems that the territorial male remains dominant over all other males on his turf.

Male dominance is expressed through several postures and behaviors which contributes to avoid potentially lethal fights. One of the most typical dominance postures is the erect and lateral posture where the dominant male slightly turns its face in the opposite direction of his opponent thus pointing the tips of its horns in his direction. It can also hold its horns high while nodding its head every now and then.  The subordinate male usually responds with a head-low posture. Fights are rare and spectacular. They usually occur between dominant males fighting for an oestrous female or to access a waterhole. In this scenario, males fight by lowering their heads and by clashing the base of their horns or they may try to strike diagonal downward blows with the front face of their horns. They can also stand in reverse paralell and try to stab each other by lunging backward with their horns at their opponent over their shoulder. Despite the highly dangerous horns, fatal issues remain rare.

Reproductive behavior: Oryx breed all year long. Gestation period goes from 265 to 300 days with an average length of 210 days according to Kingdon. The courtship is almost similar to other antelopes except in the approach phase. The male circles the female in erect posture while she is in head-low posture. The female rarely let the male approach her frontally and may chase it. It eventually lets the male approach and it will then squat and urinate. The male will test the female's receptivity through flehmen (male tests the female's urine through its nostrils and makes a face to let the molecules contained in the urine hit the Jacobson's organ located in its palate). If the female is receptive, the male executes the laufschlag (lunge with the front paw to the female's back paws) and mounts.

Females isolate to give birth but is often followed by the male is it is receptive immediately post-partum. The fawn remains hidden and immobile in vegetation between 3 to 6 weeks. It is visited by its mother up to three times a day to enable it to suckle. After the first weeks, fawsn follow their mother who may join forces with other females with young for a short period of time. After several months, young join nursery herds guarded by several females or none.

Predators: Lions are the main predators of adult oryx. Packs of spotted hyenas and wild dogs also prey regularly on adult oryxes. Leopards, especially males, and coalition of male cheetahs, are capable of taking down an adult oryx and exceptionally do so but usually prey on subadults and calves. Oryx are dangerous prey and defend themselves with vigor if cornered. There is at least one reported case of an African wild dog being gored to death by an adult oryx who was eventually overwhelmed by the pack of wild dogs. Cases of lions or leopards being impaled by oryx are often mentioned but seems to be more of a legend. Oryx usually flee from predators rather than fight them. Nile crocodiles are also potential predators of adults. Calves are hunted by all major African predators and jackals.

Best places to see it: Oryx is rarely seen while on a safari because they are mainly found in reserves outside the traditional circuit. Yet, they are common in Samburu in Kenya. You can also find it in Tsavo and Meru where they are not as abundant. Awash National Park in Ethiopia, provides very good sightings, perhaps even better than Samburu.