Dik-diks, are very small antelopes no bigger than a hare. All dik-dik species but one are found in Eastern Africa but one species found on the Namibian coast. It is adapted to live and arid and hot environments. Indeed, dik-diks' water needs are among the least of all bovids enabling them to survive for long periods without water. They also have the faculty to lick water drops on their nose which explains their noses' length. A network of blood vessels also ensures that the blood is cooled before reaching the brain. Cavendish's dik-dik (Madoqua cavendishi), Thomas' dik-dik (Madoqua thomasi) and Damara's dik-dik were formerly considered as subspecies of Kirk's dik-dik but seem to have been elevated to full species status. Kirk's dik-dik and Cavendish's dik-dik are probably the species most likely to be encountered in the national parks of Eastern Africa. Kirk's dik-dik is found from Southern Somalia to Central Kenya up to Samburu National Park. It is one of the smallest subspecies with yellow-olive coat with a grey saddle on the back. Cavendish's dik-dik is the biggest species with a greyish coat. It is found in the Mara-Serengeti ecosystem in Kenya and Tanzania. The two species have similar habits and ecology. 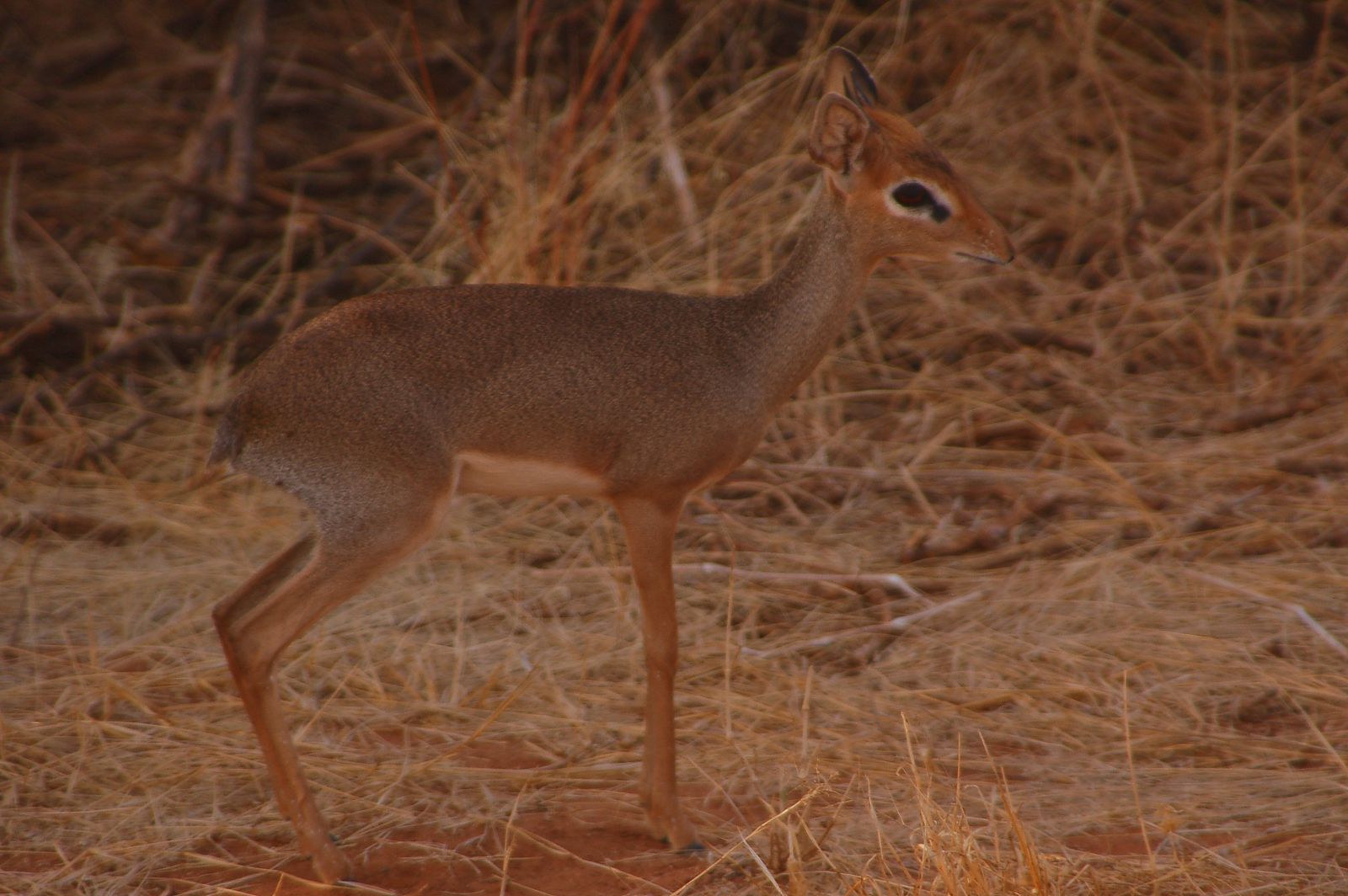 Habitat: Dik-diks are partial to arid and hot environments with preference for dense thorn thickets, bushes, and open woodlands.

Food: Browser. Dik-diks feed on almost on specie of foliage from trees, shrubs, bushes accessible to them. They also feed on fruits, flowers, pods. Despite this diverse diet, dik-diks are very selective and only feed on the most nutritious parts of plants due to their high metabolism. They rarely graze.

Social structure and behavior: The social structure of the dik-dik is that of a monogamous pair with or withou their young. The couple stays together until one of them dies. Exceptionally, polygamous groups may form when feeding resources become scarce forcing dik-diks to gather in hotspots where food is more plentiful.

The pair establishes a territory defended by both the male and the female against individuals of the same sex. The size of territories varies depending on the available resources with a minimum of 1ha to 10ha. The more resources the lesser the territory. Territorial boundaries are marked through the use of latrines and with secretion emitted by the preorbital glands which is deposited on the stem of plants. Dik-diks have a specific ritual to mark their territory: the female will urinate on the dung pile before defecating. The male will smell the latrines before raking the dung pile with its front hooves before urinating and defecating on the marks made by the female.

During territorial fights, males charge one another, dorsal crests erected before stopping abruptly one meter away from one another. This is called air-cushion fighting. This little game goes on until one of the two protagonists flees. During the rut, males are especially aggressive and will horn thrash vegetation around them.

Dik-diks may be active as much in daylight or nighttime depending on species with activity peaks before down to 9 am and later afternoon until midnight. Some species are rather nocturnal such as the Salt's dik-dik.

Reproduction: Dik-diks may reproduce all year long but have birth peaks during the two yearly rainy seasons. During the mating ritual, the male sniffs various parts of the female anatomy such as her preorbital gland, her head, neck, flanks and vulva. The female adopts a typical posture with arched back, raised tail. She eventually urinates. Male will test the urine to determine the female's receptivity. If receptive, mating will proceed. Gestation lasts from 166 to 174 days. The female isolates to give birth. Sexual maturity is reached from 6 to 8 months. Young females leave their parents before their first oestrous to avoid incest.

Best places to see it: Diks-diks are numerous in Samburu where sightings are almost guaranteed. Elsewhere they are usually present in most reserves in Eastern Africa but are hard to see and photograph as they are easily spooked and often dive for cover.