The waterbuck is big and handsome antelope which belongs to the reduncini tribe which regroups those medium to big-sized antelopes which live in the most humid environments. Two species may be distinguished : the defassa waterbuck (Kobus defassa), and the ellipsen waterbuck (Kobus ellipsiprymnus). The later has an ellipse on the rump whereas the defassa waterbuck bears a white spot. The defassa waterbuck is found in all mesic savannahs at the West of the Rift Valley from Zambia to Senegal and Gambia including Kenya, Ethiopia and the Sahel band. It is absent from the Sahara and avoids the dense tropical forest of the Congo Basin. The ellipsen waterbuck is found from Northeastern South Africa to Kenya including Mozambique and Tanzania. The two species are sympatric especially in Kenya and Tanzania and may hybridise. 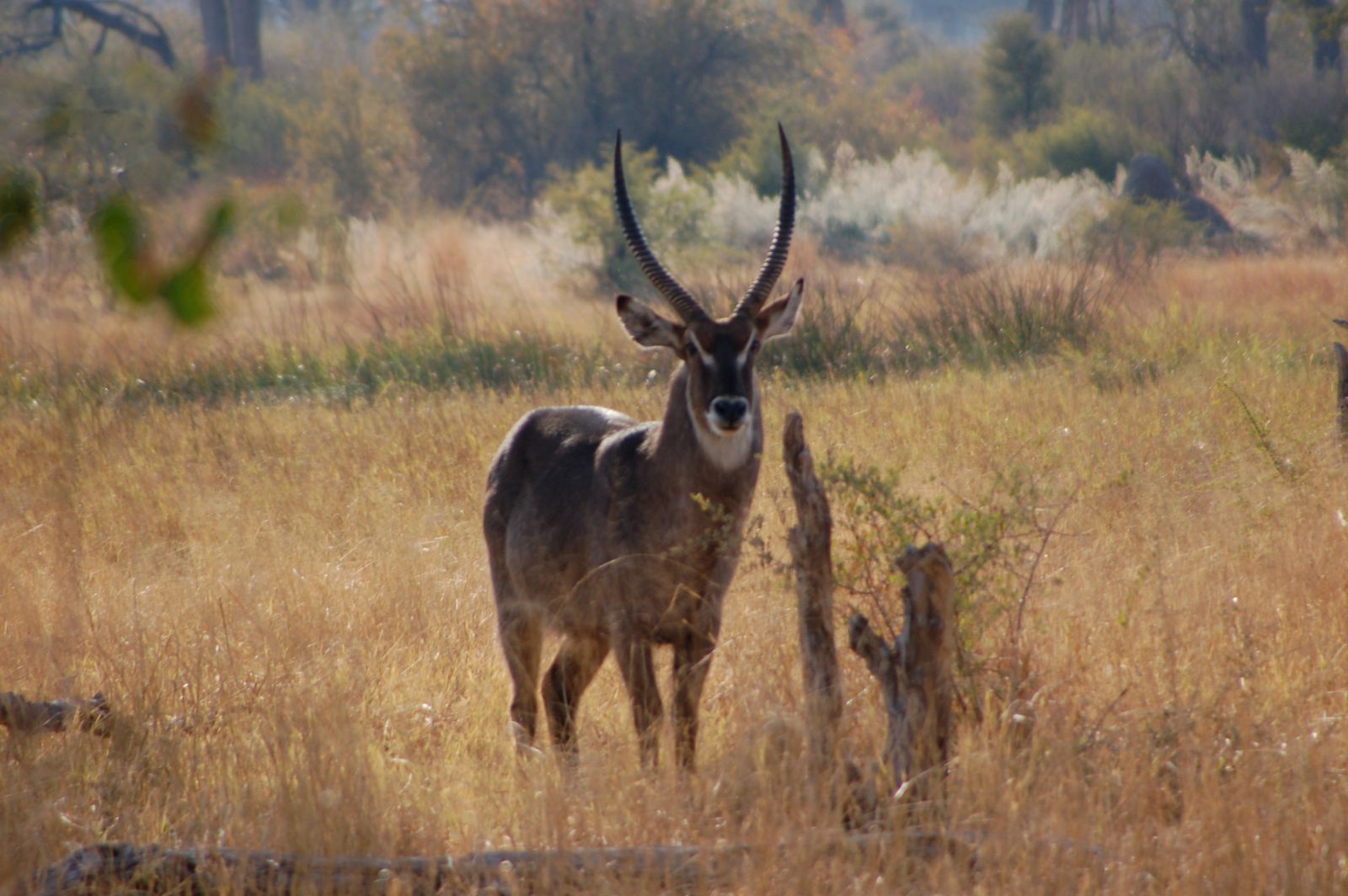 Habitat: Waterbuck never stray away from water and are partial to woodlands, gallery-forests, scrub, wet savannahs, woodland savannahs, floodplains, open areas and grasslands close to a permanent source of water.

Food: The waterbuck is a grazer. It also feeds on reeds and browse to satisfy its protein intake requirements. 70 to 95% of its diets is composed of various species of grass (Cering et al.). Studies demonstrated that waterbucks have four times more protein requirements than other grazing bovids. Its rich protein diet produces  urea which needs to be flushed through water intake which partly explains its dependence on water. Waterbucks have no physiologic adaptations to store water in hot and arid climates which further explain their high water requirements compaired to other antelopes.


Social structure and behavior: Waterbucks are sedentary and territorial. Females are sedentary and live in small herds of not more than a dozen females and their young in home ranges (200 to 600 ha) which overlap with that of other female herds and encompass several males territories.

Males are territorial when they are fully mature at around 5 years old. Territories are not marked through scent-marking but merely by male's presence and body scent. Indeed, the waterbuck's coat releases an oily secretion with a pungeant smell which not only insulates the waterbuck's body from water but also discloses its presence and provides identification. The smell is sufficient to indicate territory ocupation making scent-marking through defecation redundant.

Yet, territorial males tolerate other males provided that they behave submissively. When an estranged male enters the territory of a territorial male, the later will make a lateral display with head held high, arched stiff neck while in displaying penile erection. The purpose of the lateral display is to emphasize the circumference of the neck, the size and the length of the horns which are markers of dominance and discourage fights. Should the intruder proceed further, the territorial male will then present a medial-horn presentation with the tims of the horns facing the intruder. At this point if the later does not adopt a submissive posture by lowering his head in a low-stretch posture, horns pointed backward and mouth open, a fight may unfold horns against horns. Contrary to what common wisdom may assume, the biggest males with the longest horns are not necessarily the winners and are actually quite shy. Long horns is rather a sign of lack of fighting experience whereas experienced fighters will have their horns dented or eroded. Fights are often prevalent among young males or when a young male fights a territorial male to usurp his territory. When chased from their territories by a younger male, old male waterbucks live a solitary lifestyle at the margins of territories. They may try to gain back their territory or form another smaller territory in less favourable habitat without waterfront but they never join bachelor herds. Bachelor herds are mostly composed of immature and young males who gather together until they are strong enough to establish a territory for themselves.

Males try to prevent roaming females from leaving their territories. They will often test their receptivity by nuzzling their rump to prompt them to urinate. Urine is collected on the muzzle and mouth of the male who will curl his lips to determine whether the female is receptive or not in what is known as the flehmen (curling of the lips enable the female's pheromones in the urine to reach the Jacoboson's organ located in the male's mouth enabling him to test receptivity). If receptive, the male executes the laufschlag (lunge of the male's anterior paw stretched to the female hind legs or abdomen) as a prelude to mounting. It may happen also for the male to spread himself in urine especially the neck and head. According to Kingdon this may be done to prevent other males to disturb or interrupt the mating ritual.  Females may also sollicit the male's attention when she is in oestrous. To do so she will hump her back and nuzzle the male's groin or the basis of its horns and can even mount him.

Waterbucks spend more than half the day foraging and grazing with peaks at dawn and at the end of the afternoon but also do so at night. Females spend more time grazing than males. Waterbucks need very little rest. According to Kingdon, less than 3% to as much as 18% of the time is dedicated to rest.

Reproductive behavior: Waterbucks reproduce all year long with a gestation period varying in length from 255 to 270 days. The female gives birth in a secluded place and the calf remains hidden in the vegetation for three weeks. The female visits the calf three or four times a day for suckling sessions. The young is weaned after 6 to 8 months. After three weeks, it follows its mother and joins the herd.

Predators: Rumor says that the foul stench which seeps from the waterbuck's coat keeps predators at bay. This has never been proven. In fact it may be that if waterbucks do not often fall prey to predators, it is due to their habit of taking refuge in water to avoid capture. Spotted hyenas, Nile crocodiles followed by lions and packs of African wild dogs are the adults main and usual predators. There are also records of leopards taking down adult waterbucks (Pienaar). Cheetahs, especial male coalitions, may occasionally prey on adult waterbucks. However, leopards and cheetahs prefer to prey on calves which are smaller and less dangerous to take down especially for solitary hunters. Waterbucks are not easy prey even for a single lion. Male waterbucks may defend themselves against a single lion, leopard or cheetah. Female waterbucks have been known to defend their calves against a cheetah with their hooves. Waterbucks will also take refuge in water if pursued by pack hunters such as spotted hyenas, wild dogs. This is not always an effective strategy against wild dogs which not averse to get in the water and drag the waterbuck back on land. Calves are also preyed upon by hyenas, jackals and pythons.

Best places to see it: Waterbucks are commonly seen in most game reserves in Southern and Eastern Africa. They can be found in great numbers at Nakuru, Masai Mara (Kenya), Serengeti, Manyara (Tanzania), Moremi, Chobe (Botswana) and Mana Pools (Zimbabwe)