Undoubtedly one of the most beautiful antelopes of Africa with the sable. The greater kudu is still quite common in Southern Africa but remains very scarce in Eastern Africa. Nowadays only Ruaha in Tanzania can offer good sightings. You can also find kudu in Tarangire (Tanzania) and in Samburu and Bogoria in Kenya but in low density. The greater kudu was one of the most prestigious trophy for hunters which is why its numbers are so low in Eastern Africa. Ernest Hemingway himself seemed obsessed with it as he relates in the "Green Hills of Africa".

Regardless of the subspecies, sexual dimorphism is pronounced with the male being 150% heavier than the female. The later is also hornless. 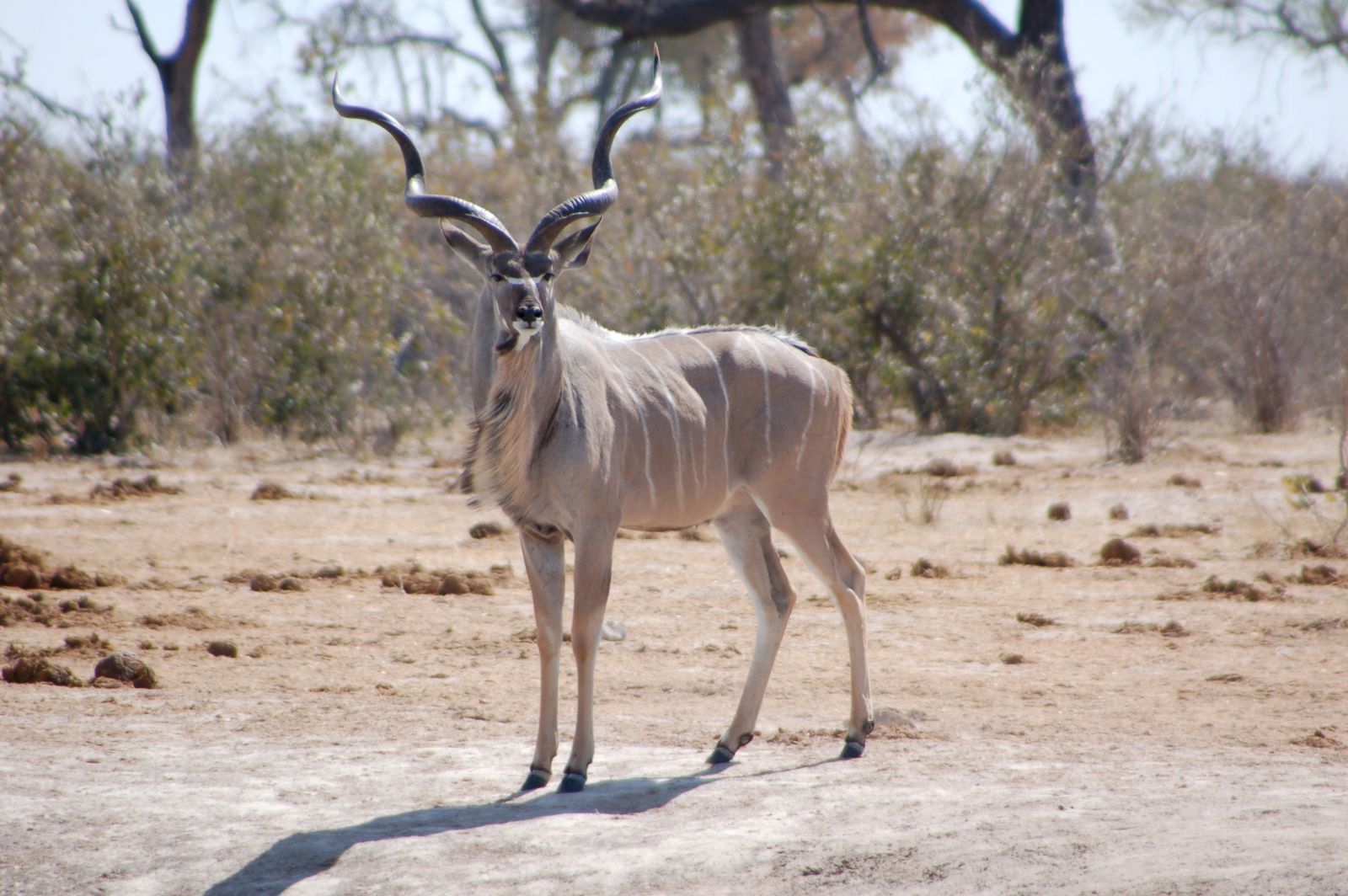 Habitat: Greater kudu is partial to thorn and scrub savannah, bush, woodlands. It may also be found in rocky escarppents and wooded hills.

Food: A browser mainly at 80%. More than 150 species of plants are recorded in its diet (Owen-Smith). It also eats foliage, fruits, seeds, tubers and sometimes grass.

Behavior: Kudus spend more than half their time foraging. They are especially active at dawn or dusk and will even feed during the night. Their great size forces them to move quite extensively in search of food. They remain inactive during the hottest part of the day by standing still in the shade.

Females form small and stable of herds of 3 to 6 females and their young. They live within overlaping home ranges ranging from 3 to 25 km2 (Owen-Smithe). Bonds between herd members are quite strong and allogrooming is a common occurrence.

Herds may sometimes be bigger up to a dozen. Males associate in informal bachelor herds numbering from 2 to 10 members who come and go as they please. It seems that there is a linear hiearchy among males based on age and size but zoologist R.D.Estes does not confirm. Males are not territorial and tolerate one another.

One or two males can join a female group temporarily if one or several females are in oestrous. It is only in these circumstances that males may confront one another. Generally the most mature male of the two will get his way. When vying for females, the one or the two males will make a lateral display with arched back and dorsal crest erect to emphasize their size. The weaker or less mature male will usually leave pretending to ignore the dominant male. But if the  other male stands his ground a fight may occur. In this hypothesis, the males will lock horns and push each other back and forth with twists of the neck to test their strength. Eventually the weaker one will leave. Sometimes the horns may get entangled and the two males may die as a result of starvation, exhaustion or from a passing predator.

When a male lingers in a female herd, it regular tests their receptivity by resting his chin on their rump prompting them to urinate. Urine is collected in the male's mouth through flehmen where the males curl its lips so that the pheromones contained in the urine can reach the Jocboson's organ located in the palet. If receptive, the male follows the female, head low resting on her back while she walks. Mating takes place when the female tops walking indicating her readiness. The couple can stay together for up to two days.

Reproduction: Females are sexually mature at 2 or 3 years old and can give birth every year.  Gestation period varies between 259 and 271 days. They have breeding seasons and birth peaks between December and February depending on the locality but can also breed all year long. At birth, the mother leaks her calf clean to remove all body smells which could attract predators. The calf stays hidden in the bushes for the first 15 days with periodical visit from the mother to enable it to suckle.

Predators: Because of the sexual dimorphism between males and females, the two sexes are affected differently by predators. Males because of their huge size tend to be especially targeted by lions, spotted hyenas or African wild dogs packs. Male leopards and coalitions of male cheetahs are powerful enough to take down even a big male kudu especially since it is not a very aggressive antelope contrary to sables but do so in exceptional circumstances. They are a few pictures on the net depicting leopards or cheetahs tackling male greater kudus single-handedly. However, leopards and cheetahs are more likely to tackle females and young especially in the case of the cheetah.

Kudus are not fast. In presence of predator, they freeze relying on their criptic coat to remain unnoticed like bushbucks. If  the predator gets too close they bounce explosively in the bushes. They jump as high as 3m.

Best places to see it:

It is quite hard to see greater kudus in Eastern Africa especially within the popular and touristic Northern Tanzania and Southern Kenya circuits. In the Mara-Serengeti ecosystem, the greater kudu is only vagrant in the Serengeti and is only found in the hunting reserve of Maswa south of Serengeti. With a lot of luck, one may find it in southern Tarangire where it it used to be common in the past but without any guarantee. Greater kudu is uncommon in the Tarangire like the lesser kudu and the fringed-eared oryx whose numbers have declined. They used to be regular in Tarangire.

In Kenya, there used to be a time where they could be seen regularly in Samburu. It is still present in the reserve but sightings remain scarce. Bogoria lake is probably your best bet for quality sightings in Kenya.

Outside of the beaten track, Ruaha National Park in Tanzania probably offers the best sightings in the whole Eastern Africa sub-region.

In Southern Africa, it is rather common and you can see it quite easily in the Kruger in South Africa, in South Luangwa and Kafue in Zambia, in Hwange in Zimbabwe, in Moremi and Chobe in Botswana and Etosha in Namibia.