Baboons are dogfaced primates which live mainly in the savannah. There are several subspecies but the chacma baboons of Southern Africa and the olive and yellow baboons of Eastern africa are the most common species. Baboons live in troops averaging ten to several hundreds individuals with a strict hiearchy. Females stay in their clan for their entire life and form the core of the clan. Hierarchy exists between females based mainly on age. Males move from one troop to an other and fight between one another to establish their dominance over a troop. A troop may be led by several dominant males which ensures better protection. Baboons are the primates which spend the most of the time on the ground, cimbing trees only at night for protection against predators. The most vulnerables occupy the higher branches whereas the more powerful males sleep on the lower limbs. 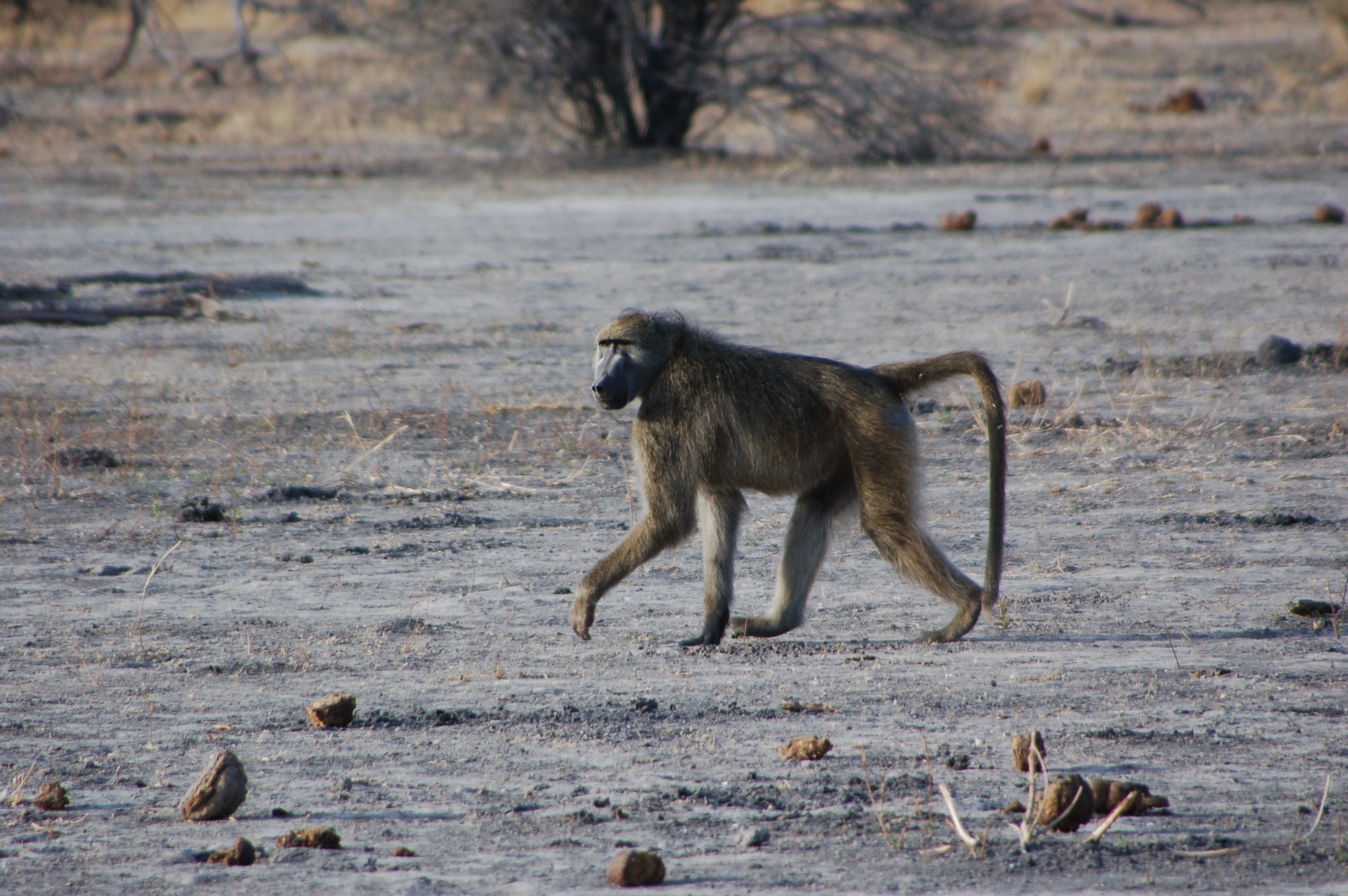 Sexual dimorphism is extremely pronounced in all baboon species in favor of the male which is almost twice as big as the female.

Habitat: The extensive range of baboons in Africa attests to their great capacity to adapt to almost any habitat in Africa but dense rainforest and true deserts although they may be found at the fringes. Baboons may also be found in the Namid desert along its rare rivers. They are more commonly found in woodland savannahs and grasslands, all woodland habitats, arid savannahs and grasslands of the Sahel and in the Horn of Africa. Their only habitat requirements are the presence of trees and or rock in which to find refuge against predators and the presence of water as they need to drink daily.

Food: Extremely diverse, baboons are mainly herbivores but may be occasionally carnivorous. They feed on grasses, flowers, fruits, pods, seeds, bulbs, roots, rhizomes, tubes, tiwgs, bark, foliage and even aquatic plants. Close to a hundred of species of vegetable matter has been recorded in their diet. As reported by the zoologist Jonathan Kingdon, it is easier to list what they do not eat rather than what is part of their diet.

Occasional predators, baboons prey on insects, arthropods, crustaceans, amphibians, lizards, nestlings and small birds, small rodents, lagomorphs. Exceptionally, male baboons may prey on gazelle and antelope fawns weighing less than 6 kg. When they are in groups they may also chase a cheetah or leopard from their freshly killed prey.

Social structure and behavior: The social structure of baboons is quite complex. Baboons live in troops composed of dozens or even hundreds of individuals. These troops live within home ranges which overlap with those of other troops. Troops usually avoid one another but meetings between two troops are usually peaceful. Confrontation may develop when several troops compete for scarce resources such as food or water or even shelter. Usually, the troop with the inferior numbers or with less adult males retreats.

Troops are mostly composed of females who remain in their natal troop for the rest of their life. There is a linear hierarchy among females. Young baboons inherit a rank slightly below that of their mother in descending order meaning that the newly born baby will rank higher than his siblings born previously. Young males end up living their troop before they reach maturity and emigrate to join another troop where they may have better opportunities to mate. These young males will often form coalitions to supplant an older and established male within the troop that they invade. Although size and the length of canines play are attributes which contribute to achieving a dominance status, they are not the only ones. The ability to form coalitions may be as critical. Very often intermediate ranking males by forming a coalition can dominate troops containing physically more powerful males. Genegally, fights for domination are avoided considering how lethal the canines of the male baboon can be. Usually, threats through yawns exposing the canines accompanied by mock charges, bluff are sufficient to prompt the weaker party to flee. It may happen that males seize a juvenile to protect themselves from harm as juveniles are not attacked by male baboons.

Being a dominant male may increase mating opportunities as females seem to be more attracted to them. Yet, females may have their favourites among males which do not necessarily include dominant males. Sometimes females may form a lasting bond with one or two males by foraging with them and through grooming session. The female will usually mate with these favourites who in return will afford her and her young added protection from harassment from higher ranking females or other males. They will also intervene if their young are being manhandled or kidnapped by other baboons. Newly arrived males often seek to establish this special bond with a female in order to facilitate their integration in the new troop or to bolster his mating opportunities.

Baboons are diurnal and are active during the whole day where they spend most of their time on the ground to forage. They take refuge in trees when night falls to protect themselves from predators.

Reproduction: There is no mating period and baboons can reproduce all year long.  Female's receptivity is determined by the swelling and colour of the skin around the genitals. When the skin is vivid pink or red and the skin swelled at its maximum, the female is then ready to mate. She will usually wander in search of a male, solicit and present to them. These may answer by touching and inspecting the area around the genitals, by grooming the female and may smack their lips. They may also completely ignore the female. Males only mate with females who are fully in oestrus and avoid pre-oestrous females and immature females.

Gestation period is 6 months. The baby weighs around 900g at birth. It is weaned after 300 days. It hangs on his mother's belly after birth. after a few months it can climb on her back and interact with other members of the troop.

Predators: The leopard is the main predator although the baboon is not among his favourite prey contrary to a widespread myth. Lions, spotted hyenas, Nile crocodiles and African rock pythons are occasional predators. Great raptors and chimpanzees can prey on young baboons. Although baboons react aggressively in their presence, it seems that cheetahs and African wild dogs do not prey on baboons. The baboon may be more than a match for the cheetah. Indeed, baboons are difficult prey for any predator regardless of size due to the common defence from the troop led by several adult males followed sometimes by females and young which is an effective deterrent. This enables the troop to forage on the ground in the open even far from any refuge. When a predator is spotted, the baboons will circle it, mob it and mock charge it while usually avoiding making direct contact if it is a leopard or lion. The mobbing and harassing is accompanied by loud shrieking and other calls making the experience extremely intimidating for any predator who will usually retreat. This is especially the case when a solitary hunter such as the leopard is involved. Although a leopard is more powerful than any male baboon, the concerted attack of several male baboons with their sharp canines could overcome a leopard. Leopards have already been killed by groups of baboons. This is why leopards avoid attacking baboons during the day where they are especially watchful. They prefer to wait the night to strike and take advantage of the darkness to seize an inattentive member of the troop or one stationed on the lowest branches of their sleeping tree.
Best place to see : Baboons may observe in most African parks and reserves without difficulty and even outside.