In my opinion the handsomest antelope of Africa on par with the greater kudu. What a shame it is so scarce, thanks to trophy hunters! Sable has been hunted to the brink of extinction by hunters and this animal has almost disappeared from Eastern Africa. Nowadays one can only hope to see them in Ruaha, Selous and Mikumi in Tanzania. In Kenya they are present in Shimba Hills. . They are more numerous in Southern Africa but never in high density except maybe in Hwange in Zimbabwe.

Sable is a member of the hippotragini tribe which includes the rarest and most beautiful species of antelopes such as the roan, the addax, the gemsbok, and the scimitar oryx. Most of these antelopes, except the roan and sable are adapted to desert and arid zones. These antelopes are quite big, sport a mane and have a vaguely horse-shaped head which explains their name of horse-antelope. 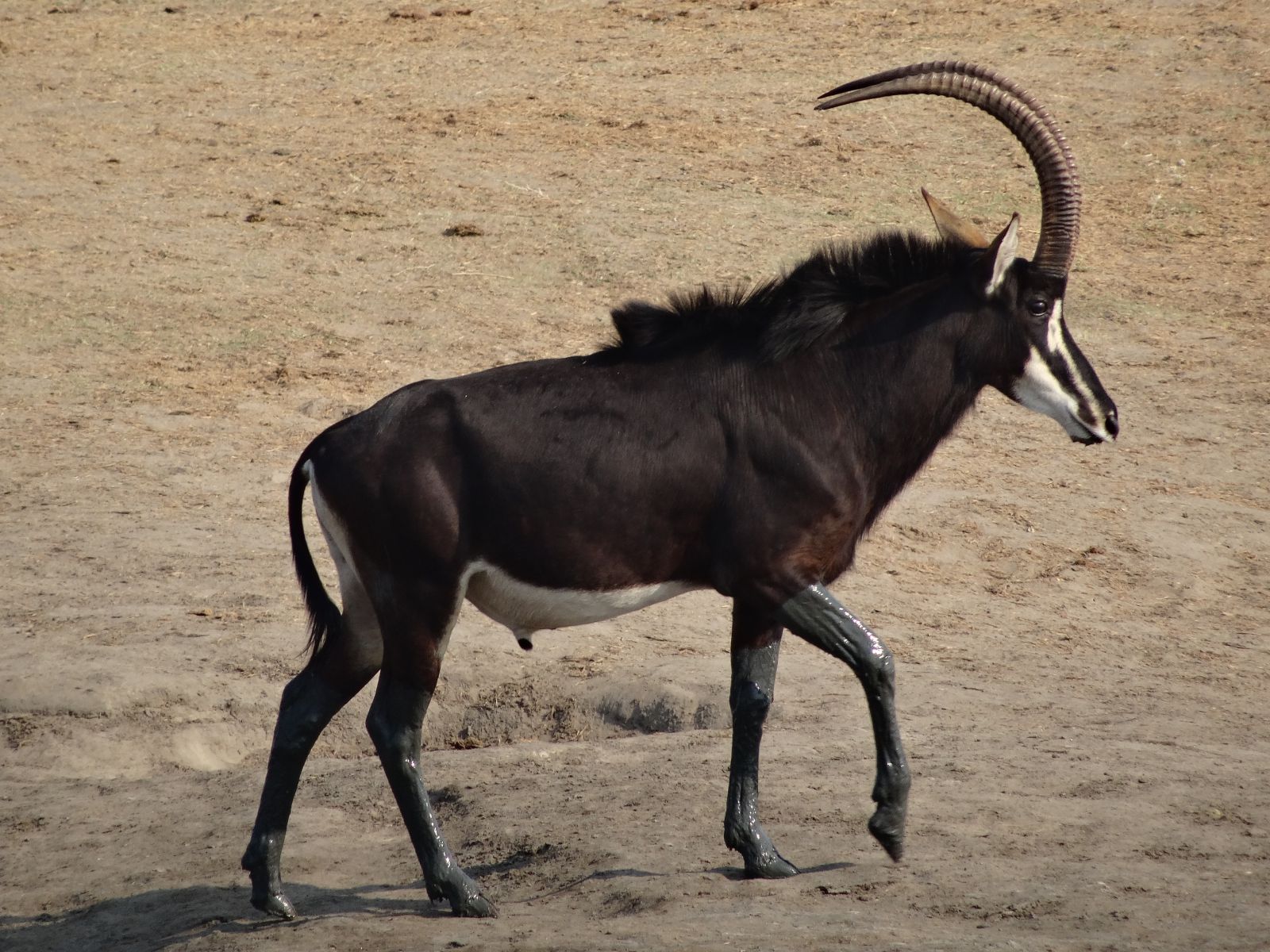 Habitat: Sable is closely associated to miombo woodlands and ecotones (transition between two ecosystems) between woodlands and grassy savannahs or grasslands. It may also be found in wooded savannahs. It is especially partial to woodlands with an understorey of grasses interspesed with grasslands. Woodlands are espececially sought after during the rains but sables will venture into open areas in search of greener pastures during the dry season.

Food: Sable are mostly grazers but turn to browse durnig the dry season. They are especially partial to short grasses from 40 to 140 mm in height (Grobler) but no higher than 160 mm with high nutritious value. Contrary to wildebeests and Thompson's gazelles they do not feed and short-cropped grasses. The morphology of the snout is adapated to a selective diet with preference for tufts of grasses young in their growth stage. They have a predilection for tufts of grasses growing on termite mounds. 20% of the sable's diet is composed of browse which is consumed during the dry season when grasses disappeared from the woodlands or have become unpalatable. They complete their dietary requirements by  frequenting salt licks to extract minerals. Similarly, they will lick dry bones to fulfill their needs for calcium and phosphorus. Sable usualy drink daily but can go without water for several days in drier environments or during the dry season.

Behavior and social structure: A gregarious species. Three types of social structures may be distinguished : breeding herds, bachelor herds and territorial males. Breeding herds are composed of females and young numbering from 10 to 20 individuals up to a hundred (actually a temporary gathering of several herds which usually split in the rainy season). There is a hierarchy in female herds based on seniority. The dominant female is the oldest and leads the herd and determine its movements. She is also dominant over subadult males which are chased from the breeding herd by the females when they reach 3 years old. Hierarchy is maintained through aggressive behavior and displays such as horn or head sweeping on the rump or body of a subordinate member, lateral display and medial horn presentation as a threat (Estes). Individuals within the herd keep some distance from one another. Breeding herds roam within a home range which overlaps several male territories. The richer the home range, the smaller it will be and its movements in search of food limited to the point of being resident especially during the rainy season.

Male become mature around 5 or 6 years old which the time where they establish territories. As for females, the size of the territory is reversely proportional to the amount of food found on the territory. The more food the smaller the territory. Territories are delineated with feces which are dropped along the boundary at regular interval. The process is ritualized as the male will paw the ground with both its front legs alternatively before defecating while wagging his tail. The male displays its dominance through the usual displays used by most antelopes: lateral display emphasizing the size of the horns and body, horn sweeping, low or medial horn presentation and sweeping of the horns on the rump on a subordinate individual. The territorial male also uses these displays when breeding herds enter his territory. Subadult males pay they respect to the territorial male by head low posture as a sign of submission. Even the dominant female in a breeding herd will defer to a territorial male even though she will continue to lead the movements of the herd. When a breeding herd is on the move within the territory of a territorial male, he may join the herd and will position himself in the rear like zebra stallions. He will usually let the dominant female lead except if the breeding herd tries to leave his territory. In this hypothesis he may try to herd the females back in typical low-head posture while snorting and horn-shaking. He can also make a lateral display to block their path or use low or medial horn presentation. If the breeding herd persists in leaving, the territorial male may become aggressive and charge or pursue the rebelling individuals while bellowing in a frightening way. If a breeding herd establishes itself on the territory of a male it may become resident while the territorial male may withdraw in cover and isolate himself.

A specificity of the sable is that territorial males do not have equal status. This is unusual as in most antelope species territorial male enjoy equal status and acknowledge it mutually by avoiding fights through ritual display. It is not uncommon for territorial bulls without breeding herd on their territory to invade the territory of another territorial male if a breeding herd is present on his territory. The invading male will not hesitate to trespass on the territory of another and fight the holder of the territory and displace him. The displaced male will leave his territory temporarily but eventually returns when the intruding male leaves. Invasion of another male's territory also happens when a territorial male follows a breeding herd into another male's territory. In these two hypothesis, more often than not, the displaced male is a young male who just established his territory and deferred to the seniority of the invading bull. When sables fight they fall down on their front knees, shoulder against shoulder and try to stab one another over their shoulder while parrying the thrusts of their opponents. Fights may be violent and lethal considering the power of this antelope and dangerousness of the horns. When two individuals have equivalent status they stand in reverse parallel to one another mutually acknowledging their status.

Males which are chased from the breeding herd and who are yet to establish a territory gather in bachelor herds in suboptimal and peripheral spots around territories.

Sables are rather diurnal in habit. They forage from dawn till 9 am. They rest and chew the cud during the hottest part of the day and become active again at the end of the afternoon until dusk. They be active at night when the moon is bright.

Reproductive behavior: Sables are seasonal breeder in most of their range except for the Roosevelt's sable which can reproduce all year long. Usually the mating season occurs at the end of the dry season with a birth peak happening at the end of the rainy season when food is plentiful. The reproductive behavior is the same as the one found in many species of antelope. The male will test the female's urine to determine receptivity and will follow her in head-low posture and wll execute the laufschlag (lung of the front leg between the hind legs of the female or to the abdomen as prelude to mating). If the female is unwilling to proceed, the male may become aggressive and may chase her while bellowing. The female will run frantically while screaming in distress until it crouches on the ground in submission.

The gestation period is 8 months. The female isolates to give birth. The calf remains hidden in vegetation during three weeks before following the female and joining the herd where he may associate with other calves in nurseries only seeking his mother to suckle. He is weaned between 6 to 8 months.

Predators: Sable are rarely preyed upon for several reasons. First of all it is a powerful antelope and its great size and curved horns are an effective deterrent. Secondly, sable is characterized by its fighting spirit and it will not hesitaite to stand its ground when attacked by powerful predators. A sable bull has been seen chasing and putting to flight a lioness. In another instance; in the Shimba Hills in Kenya, a leopard who seized a sable calf was chased away by a bull. Similarly a group of adult sables chased two leopards who had seized a calf. It is not a surprise if their flight distance is the shortest of all antelopes. Finally, sable antelopes are rarely on the menu of African predators as few of them inhabit the miombo woodlands where sables are found. In miombo woodlands, the leopard is the main predator (Grobler) followed by the spotted hyena which remains scarce in such environment. If leopards, especially males, are powerful enough to bring down a full grown sable they rarely do so as it is not worth the risk which is very real considering the sheer power of the adult sable and its lethal horns. There is an account however of leopard who had taken down a young sable bull (Grobler). If adult sables are not frequently targeted by leopards, they do take a toll on subadults and young.

In more open areas and wooded savannahs, lions, packs of wild dogs, spotted hyenas become the main predators. Cheetahs prey on calves and subadults but male coalitions may tackle an full-grown sable. Nile crocodiles are threat for sables of all age classes. Young, aside from the aforementioned predators are also preyed upon by jackals.

Best places to see it: Sable is elusive and very difficult to spot. It seems. Hwange in Zimbabwe is the best place to see them. They still occur in large numbers there guaranteeing frequent sighting (at least in my experience). Kafue in Zambia and Chobe in Botswana are also good spots. Kruger in South Africa can offer some opportunities to a lesser extent. In Eastern Africa, the Tanzanian parks of Ruaha, Mikumi and Selous  seem to be the best bet to see them with no guaranteed sightings. In Kenya, they can only be seen in Shimba Hills. Western hunters bear a great responsibility in the decline of this magnificent animal.

Even in the rare parks where it is common, sables are not easy to observe and as it is difficult to get closer than 30M. Its flight distance as regard vehicles is quite important.