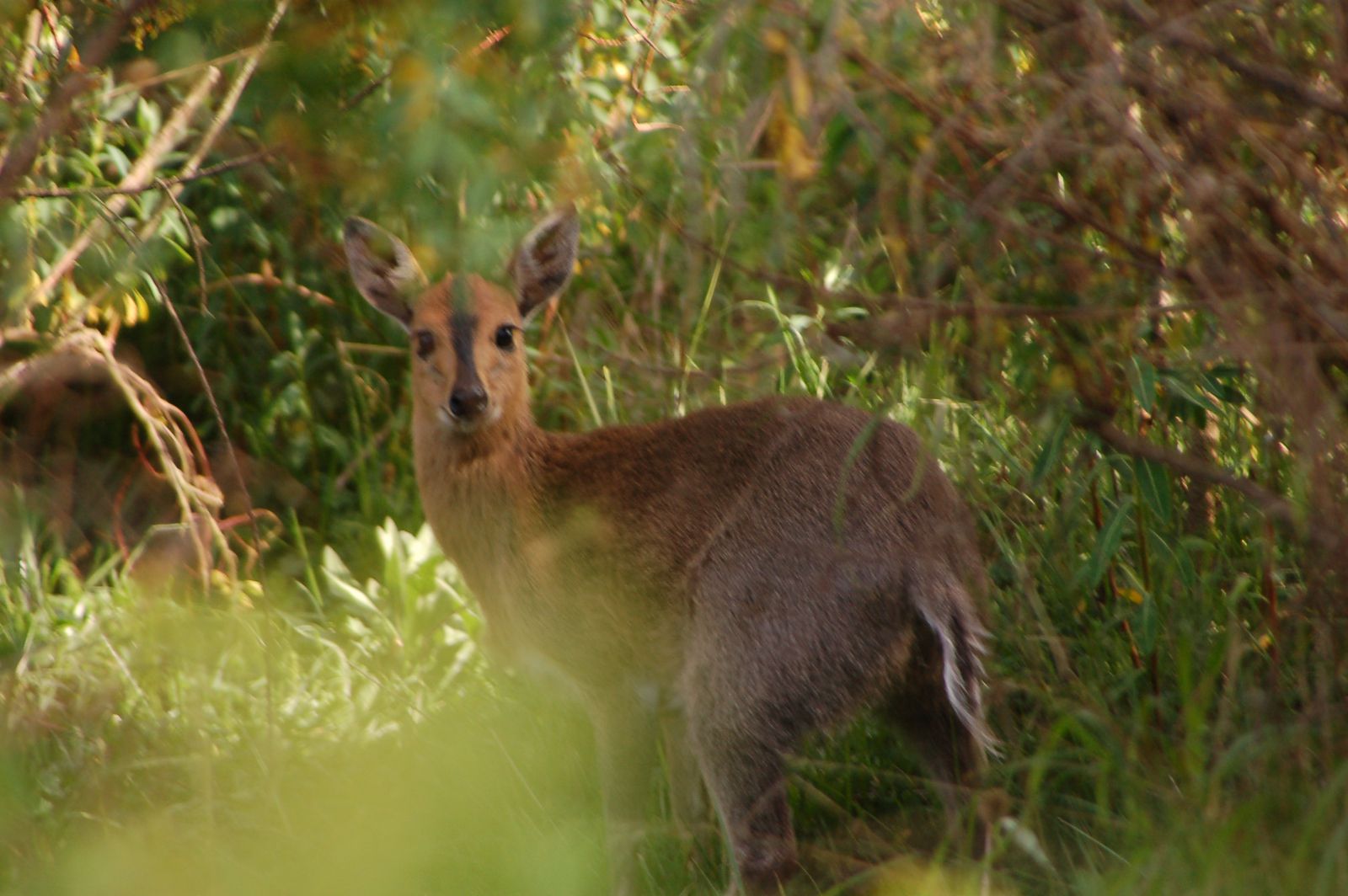 Habitat: Very adaptable, duikers are partial to wooded savannahs and woodlands but they may be found in altitude. Its only requirement is to have enough vegetation cover. It avoids grasslands and short-grass plains. It can go without water for several days and does not require access to a permanent source of water.

Food: Mostly a browser, duiker feeds on leaves of shrubs and bushes accessible to it. It is also frugivorous. Seeds and flowers also form an important part of its diet. Examination of 191 duikers' stomachs disclosed the presence of 45 different speicies of leaves, 33 different species of seeds and fruits and 15 different of flowers. Duikers also feed on forbs but rarely eat grass. They can raise on their hindlegs to reach food higher up. Common duikers occasionally est meat. They have been seen stalking, catching and feeding on birds (queleas, crowned guineafowl, ducklings, doves) but also lizards, insects and even a striped mouse.

Social structure and behavior: Duikers are solitary and territorial. The male and the female reunite only during the female's oestrous to mate. The male will stay at her side for several days before leaving. Male and female territories are similar sized and average 13 ha approximately. Territories of same-sex individuals have limited overlap. Males territories may overlap those of up to two females on the other hand. Only males defend their territories where they will actively chase intruding adult males. Subadults are tolerated.

Males mark their territories through the use of dark substance produced by their preorbital glands that they rub on vegztation. When confronted by an intruder, males may thrash horn vegetation to impress the intruder or may threaten it with their horns or chase after them. If the territorial male overtakes the intruder it may horn or but it severely, the intruding male may show absolute submission by lying flat on the ground. When fighting for an oestrous female, males of equivalent size and strength will kneel and head-butt each other trying to horn their opponent's neck and flanks while parrying blows directed at them.

Duikers are active both day and night. During the day they are rather active early in the morning or late in the afternnon.

Reproductive behavior: Duiker reproduce all year long. Reproductive and sexual behavior does not follow clear and well-set patterns like in other antelopes. Courtship lasts several days where the male pursued the female, flicks his tongue, lick her genitals and bleat midly. Should the female urinate, the male may receive the flow of urine on its snount and determine receptivity through flehmen (lip curl enabling the pheromones in the female's urine to reach the male's Jacobson's organ and reveal the female's reproductive status and readiness to mate), it may also execute the laufschlag (lunge from the stiffened forepaw to the hindlegs or the abdomen of the female) as a prelude to mating. It is only when the female stops moving around that mating may proceed.

Predators: Leopard is the adult's main predator throughout the range followed by wild dogs, cheetah, hyenas, rock pythons, caracal and jackals. Lions and crocodiles may also prey on duiker if the occassion arises. Young are preyed upon by baboons, honey badgers and big snakes. There is one recorded case of secretary bird catching a young duiker.

Best places to see it: Unpredictable despite found in all sub-Saharan Africa. Duikers are maybe easier to see in the Bale Mountains and Ethiopian highlands generally. Because of its small size, its habit to dive in the bushes at the slightest danger, duikers are hard to observe and even harder to photograph.